Maldives ex-president says “will be in jail tomorrow”

Male: The former president of the Indian Ocean archipelago of the Maldives awaited arrest in his house on Thursday, vowing to stay and fight against the government he says ousted him in a coup with the connivance of the police and military.

Mohamed Nasheed spoke to reporters at his home on a narrow lane in Male, capital of the islands renowned for their luxury getaway resorts, as rain poured and hundreds of onlookers gathered under umbrellas awaiting the arrival of police. 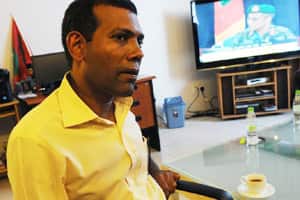 Former Maldives president Mohamed Nasheed sits next to his television during a broadcast of a press conference of top Maldivian military officer, Brigadier General Ibrahim Didi, at his residence in Male on 9 February 2012. AFP

“The home minister has pledged (I will be) the first former president to spend all my life in jail," said Nasheed, who was relaxed and smiling and showed no signs of his reported beating on Wednesday.

He said he hoped the international community would act quickly as “the facts on the ground are that tomorrow I will be in jail".

However, there was no sign of the police by early evening. Police Commissioner Abdullah Riyaz, when asked by Reuters if and when a warrant would be served, declined to comment.

Nasheed said he would accept his arrest, as he did 27 times before, under the reign of former President Maumoon Abdul Gayoom, who jailed him for six years in all.

The former president spoke a day after he declared his ouster in a gunpoint coup engineered by a coterie of police, military and political rivals, and led thousands of supporters onto the streets where they clashed with riot police and troops.

Only about 330,000 people live permanently in the Maldives but there has been much interest in the tumult there this week because of the huge numbers who visit the islands on holiday.

The Maldives gets about one million visitors a year, most seeking a sun-and-sand getaway at resorts that charge up to $1,000 per night.

Earlier on Thursday, police commissioner Riyaz told reporters that 18 police stations and two courts on other atolls including the second-largest population centre, Addu, had been burned or attacked by Nasheed supporters the day before.

Already, diplomats have arrived in Male, as did a Commonwealth team that met Nasheed and other political leaders on Thursday. UN assistant secretary general for Political Affairs Oscar Fernandez-Taranco was also due into Male later on Thursday to help mediate the crisis.

A criminal court has issued arrest warrants for Nasheed and his former defence minister, but the charges against them were unclear, a senior official of Nasheed’s Maldivian Democratic Party (MDP) said.

“An arrest warrant has been issued for him and his former defence minister," MDP official Adam Manik told Reuters. “We have no idea (what the charges are)."

Newly sworn in interior minister Mohamed Jameel, at a news conference on Thursday, accused Nasheed and his supporters of terrorism, mirroring a police statement on state television the night before.

“They said they are going to throw out the current constitutionally formed government, and following that, we saw this destruction," Jameel said. “I would define it as the worst day in the history of the Maldives."

Jameel was author of a pamphlet criticising Nasheed’s religious policy as un-Islamic, which included anti-Semitic language, part of a spate of increasingly hardline Islamist rhetoric that has entered the Maldives political discourse.

The unrest has taken place far from areas frequented by tourists, who usually land at an airport on an island near Male and go directly to the various resorts in the archipelago by speedboat or seaplane.

Protests against Nasheed’s government started after he ordered the military to arrest the criminal court chief justice, saying he was blocking multi-million dollar corruption and human rights cases against allies of Gayoom, president for 30 years until he was replaced by Nasheed.

Western diplomats said they wanted all political parties, including Nasheed’s, to back down and join the unity government, while investigations into the events surrounding the constitutional crisis and Nasheed’s exit are carried out.

“We want to take the politics off the streets and cool the rhetoric down," a European diplomat based in Colombo told Reuters.

The United Nations and Western governments have given the transfer of power at least an apparent seal of approval, based on their public statements, given that the vice president’s succession was in line with the constitution.