Kolkata is at risk of arsenic poisoning

Kolkata is at risk of arsenic poisoning

Kolkata: All of Kolkata, India’s third-largest city by population, is at risk of arsenic contamination if the current level of groundwater depletion continues, admit bureaucrats at the city’s municipal corporation.

“We are very anxious," says Alapan Bandopadhyay, the commissioner of the Kolkata Municipal Corporation (KMC), admitting that the situation is “grim". 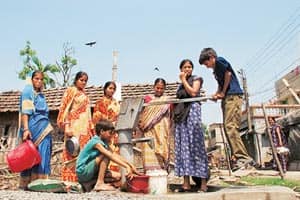 Source of life: People draw water from a tube well at Baghajatin, Kolkata. According to a study, 77 of the 141 wards in the city have “high levels of arsenic in groundwater and scientists say prolonged water depletion increases the risk of arsenic contamination. (Photo: Indranil Bhoumik/ Mint)

Of the 141 wards that the city is divided into, as many as 77 have “high levels" of arsenic in groundwater, shows a study by the School of Environmental Studies (SOES) of Jadavpur University.

In 32 of these 77 wards, the arsenic level is “dangerously high", and traces of the deadly metalloid were found in samples drawn from 32 more wards, but the level was within permissible limits.

Chronic arsenic poisoning, which stems from long-term exposure through drinking water, could cause a wide variety of diseases, including cancer of the skin, lungs, kidney and urinary bladder. Cancer, though, is a late phenomenon and usually takes more than 10 years to develop, according to the World Health Organization (WHO).

In West Bengal, long-term arsenic poisoning has typically resulted in skin lesions, neurological problems, pre-natal deaths and, in many cases, gangrene leading to amputation, says Dipankar Chakr- aborti, director of research at SOES. He claims almost 15 million people across the state are arsenic-threatened.

Mint was unable to ascertain the number of people, out of Kolkata’s estimated population of 14.7 million, who live in the 77 wards with high levels of arsenic in groundwater.

According to SOES, Howrah, Hooghly, South and North 24 Parganas are among the worst affected districts. In North 24 Parganas, for instance, 29.5% of 54,368 water samples tested by SOES showed “dangerously high level" of arsenic content, and 53.4%, higher than internationally accepted permissible limit. The figures for South 24 Parganas are slightly better, yet pretty alarming: 28.3% of samples showed arsenic content above the WHO-mandated maximum permissible level of 50µg/L (microgram per litre) and 42%, above 10µg/L.

Until recently, arsenic was seen as a threat only in the districts neighbouring Kolkata. But, now, tests show even upscale residential areas in south Kolkata aren’t safe.

A sample drawn from a tubewell in Lake Gardens, a few hundred metres from the city’s largest high-end residential condominium project South City, showed arsenic content of 825µg/L. That’s more than 16 times the maximum permissible limit. Ideally it should be less than 10µg/L, says WHO.

Though scientists have yet not been able to establish how arsenic leaches out into the aquifers, the layers from which groundwater is extracted, there is enough evidence to show that prolonged water depletion raises the risk of contamination. The most threatened areas are those that are dependent on groundwater.

“Though arsenic isn’t a big problem in the city even in groundwater-dependent areas, we are trying to proactively address the issue because you never know when it manifests itself," says Maiti.

The problem is getting bigger with Kolkata expanding, especially towards east.

Properties coming up in Rajarhat, a satellite township, and along the Eastern Metropolitan Bypass, a 21km arterial road, sell at fancy prices. All the projects there are fully dependent on groundwater, and therefore exposed to the risk of arsenic contamination.

It is not clear whether residents and real estate developers appreciate the threat, or maybe, they are confident that KMC or some other civic body would eventually supply processed water to these areas, says a KMC official, who doesn’t wish to be named.

And, builders seem to be confident that civic authorities, in their own interest, would start supplying processed water to the area before long. “Do you think the corporation could afford to ignore the (arsenic) problem?" asks Sumit Dabriwal, managing director of one of the most active real estate players in the city, Calcutta Metropolitan Group (CMG).

KMC, which owns large tracts of land along the bypass, has been selling its plots one by one. The most recent sale fetched Rs55 crore an acre. Bids have been invited for one more plot, while “a few hundred acres more" are in the pipeline, according to the corporation’s Bandopadhyay.

The excitement about properties along the Eastern Metropolitan Bypass is new found. It started with the coming of players such as DLF Ltd and Emaar MGF Ltd, which plan to build hotels and commercial complexes. But, residential properties started coming up along the road more than a decade ago, which means groundwater has continually been extracted for years. With every passing day, the threat of arsenic contamination increases. Scientists say, once released into groundwater, arsenic spreads fast.

“We are confident that we are safe for at least two to three more years. And by then, civic bodies would start supplying processed water to our properties," says Rahul Todi, whose company Shrachi Infrastructure Ltd has built a couple of large housing complexes in Rajarhat and along the Eastern Metropolitan Bypass in partnership with the West Bengal government.

“But, if arsenic popped up before, it would cost us dearly in terms of credibility."

Most developers conduct tests and bore deep into the earth to make sure the water evacuated is arsenic-free and safe for consumption. Todi claims to have dug as deep as 300ft, which, according to scientists, is a reasonably safe level to draw water from.

“But, the problem in Kolkata is you cannot go much deeper. Deeper than say 400ft, there isn’t enough water to tap," says Maiti of KMC.

Because they can’t dig too deep, some developers have gone a step further and installed advanced filtration devices. “We regularly test the water we draw. Plus we have installed good filtration devices for drinking water supplied to our properties. Yet, I would say for long-term sustainability, supply of processed water is a must," says CMG’s Dabriwal.

Some developers, such as Vedic Realty, which is planning to build a 1,200 acre integrated township near Rajarhat, have started harvesting rainwater as an alternative. But, that’s more an experiment than a solution, notes Diptibhushan Guha Niyogi, director (engineering) of Vedic.

A little over a year ago, KMC had firmed up plans to solve the problem by setting up a water treatment plant at Dhapa in east Kolkata. Funds were sanctioned, and a 20 acre site chosen. But the Rs100 crore project didn’t take off as environmentalists moved court claiming that the site chosen for the plant was protected under the Ramsar Convention, an international treaty that aims to conserve wetlands and utilize them in a sustainable way.

KMC had hoped restrictions under the Ramsar Convention would not apply to the proposed water treatment plant because it was being set up in public interest.

“Not only the new companies and complexes on the bypass, but hundreds of thousands of poor people would have benefited," says KMC commissioner Bandyopadhyay.

Alongside, KMC planned to lay a new pipeline from its water treatment plant in North 24 Parganas to its principal storage tank in north Kolkata. This was estimated to cost Rs309 crore, according to KMC’s Maiti, who claims the city’s demand for processed water could have been fully met till 2035-40 if the two projects had been implemented. But, work on the proposed pipeline, too, hasn’t progressed.

“We haven’t done the DPR (detailed project report) yet for the pipeline," admits the KMC commissioner.

KMC, however, appreciates the long-term need to generate resources to overhaul and augment the city’s water distribution system. The corporation has for the first time levied user charges on water this year. But, what it’s going to mop up in the first year from the newly levied fee is a paltry Rs2-2.5 crore.

“We are trying to recover at least the operation and maintenance costs," says Maiti, “But, this will require a massive change in the mindsets of people."