Can BJP secure an improbable win in Rajasthan elections?

The BJP swept the Rajasthan elections in 2013, but caste-fuelled anti-incumbency makes a repeat term unlikely for the party, according to pre-poll surveys

New Delhi: From Alwar to Jodhpur, Prime Minister Narendra Modi is traversing Rajasthan this week. Ahead of the state’s elections, he will be hoping his presence in Rajasthan helps the Bharatiya Janata Party (BJP) hold on to power, disrupt the pattern of alternate Congress-BJP rule and quell simmering resentment about jobs, agriculture and caste conflicts. Since 1993, the BJP and the Congress have battled each other for sustained state government rule and, in 2013, the battle turned into a political drubbing. The Vasundhara Raje-led BJP ousted the Ashok Gehlot-led Congress for the second time in 10 years by winning 163 seats (out of the 200 available), 142 more than Congress. 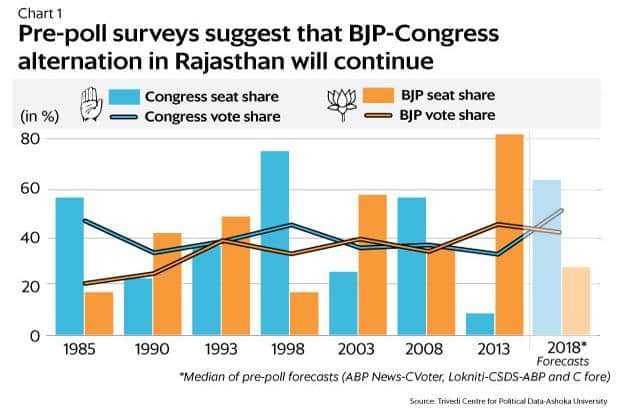 The BJP was not just more popular than the Congress but also more efficient. Like in elections elsewhere, the BJP was better at converting votes to seats. For every 1% of vote share secured, the BJP was able to gain a 1.8% seat share (or 3.6 seats), significantly better than the Congress ratio of 0.3% (0.6 seats). The BJP’s average victory margin was 14.5%, but in some constituencies, such as urban Alwar, the victory margin reached as high as 44.3%. However, recent events and pre-poll data suggest the anti-incumbency pattern in Rajasthan is set to continue. Data from various pre-election surveys point to a comprehensive Congress win. Even the most conservative estimate, the C-fore survey, predicts that the Congress will win at least 124 seats and secure 43% of the vote share.

Political science theory explains anti-incumbency as the natural consequence of ruling parties unable to honour promises made before coming to power. In Rajasthan, this has panned out on multiple fronts. As we highlighted in an earlier piece, one perceived broken promise among voters has been jobs.

Adding to the job dissatisfaction is farmer distress, which is particularly pertinent for the BJP since they drew significant support from agricultural areas in 2013. For instance, of the 20 constituencies with the most farm workers, the BJP secured a seat share of 80% and a vote share of 46% in 2013.

A range of caste-related issues also threaten the BJP’s prospects. Sanjay Lodha, professor at Mohan Lal Sukhadia University in Udaipur, says much of the BJP’s support in Rajasthan comes from a convergence of upper castes and upper classes. For instance, upper caste Rajputs have supported the BJP since the 1990s partly because of their strong Hindu associations. In 2013, a post-poll survey by Lokniti-CSDS suggested that 67% of Rajputs voted for the BJP. However, since then, a series of incidents, such as the alleged encounter of a prominent Rajput (Anandpal Singh) and the controversy over the release of the film, Padmaavat, have soured the Rajputs’ perception of the current regime.

According to Lodha, this will significantly erode support for the BJP and boost the Congress’s chances.

At the other end of the caste spectrum, the BJP could face losses in votes from Scheduled Castes and Scheduled Tribes (SC/STs). In 2013, as part of their state sweep, the BJP also scored resounding victories in SC/ST-reserved seats. Of the 58 SC/ST seats, they won 49 and secured 45% of the votes. This support will be tested by the recent caste-related issues surrounding the dilution of the SC/ST (Prevention of Atrocities) Act. All this creates conducive conditions for a Congress resurgence and explain why pre-poll surveys are predicting a comfortable victory for the party. While the Congress chief minister candidate is unclear, the main candidates —Ashok Gehlot and Sachin Pilot—are still more popular than Vasundhara Raje, according to the Lokniti-CSDS pre-poll survey. However, they are both less popular than Prime Minister Modi. In a 2014 study, analyzing the 2013 election results, Lodha and co-author Nidhi Seth suggest that Modi’s popularity, which is driven partly from his time as chief minister of neighbouring Gujarat, was an important factor in BJP’s victory. While his popularity has waned since then, it could still sway voters and this is why he is the centrepiece of the BJP’s final push in Rajasthan. Whether this is enough to overcome anti-incumbency remains to be seen—but whatever happens in Rajasthan could have profound implications for the general election.The state contributes 25 seats to the Lok Sabha and in the past three state elections, the winning party has gone on to enjoy similar success at the national level.

This is the concluding part of a two-part data journalism series on elections in Rajasthan. Click here to read the first part.