The religious groups with the lowest average levels of educationMuslims and Hindushave made the biggest educational gains in recent generation, shows Pew study

Muslims and Hindus tend to have the fewest years of formal schooling, while Jews are more highly educated than any other major religious group around the world, according to a Pew Research Center global demographic study that shows wide disparities in average educational levels among religious groups.

According to the study, these gaps in educational attainment are partly a function of where religious groups are concentrated throughout the world.

For instance, the vast majority of the world’s Jews live in the US and Israel—two economically developed countries with high levels of education overall.

And low levels of attainment among Hindus reflect the fact that 98% of Hindu adults live in the developing countries of India, Nepal and Bangladesh.

Formal education is especially low among Hindu women, who have 4.2 years of schooling on average, compared with 6.9 years among Hindu men.Yet many of these disparities appear to be decreasing over time, as the religious groups with the lowest average levels of education—Muslims and Hindus—have made the biggest educational gains in recent generations, and as the gender gaps within some religions have diminished, according to the analysis. 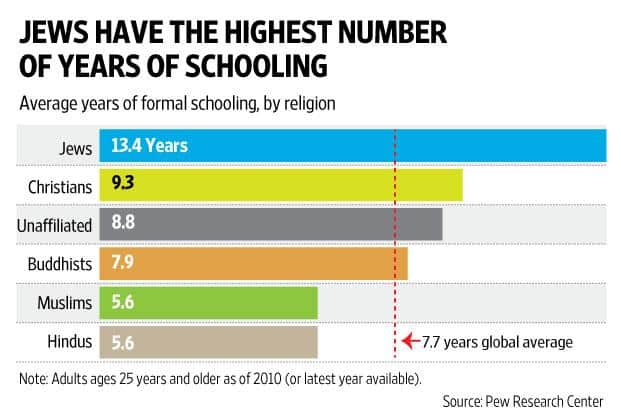 About one-in-five adults globally—but twice as many Muslims and Hindus—have received no schooling at all. Education levels vary a great deal by religion. About four-in-10 Hindus (41%) and more than one-third of Muslims (36%) in the study have no formal schooling. In other religious groups, the shares without any schooling range from 10% of Buddhists to 1% of Jews, while a majority of Jewish adults (61%) have post-secondary degrees. 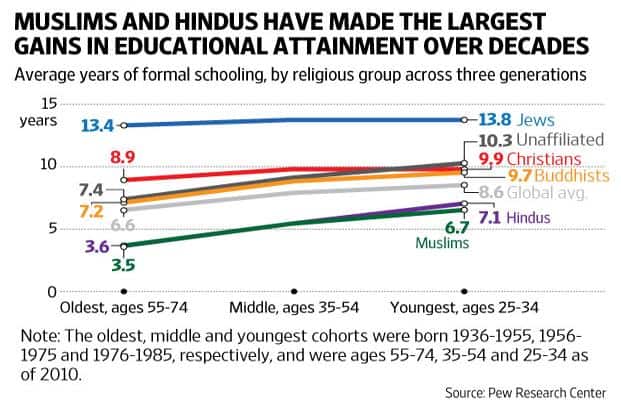 Hindus and Muslims have made big advances in educational attainment

The study finds the religious groups with the lowest levels of education are also the ones that have made the biggest gains in educational attainment in recent decades.

Over three recent generations, the share of Hindus with at least some formal schooling rose by 28 percentage points, from 43% among the oldest Hindus in the study to 71% among the youngest.

Muslims, meanwhile, registered a 25-point increase, from 46% among the oldest Muslims to 72% among the youngest.

Christians, Buddhists and religious “nones" have made more modest gains in basic education, but they started from a higher base.

The share of Jews with at least some schooling has remained virtually universal across generations at 99%. 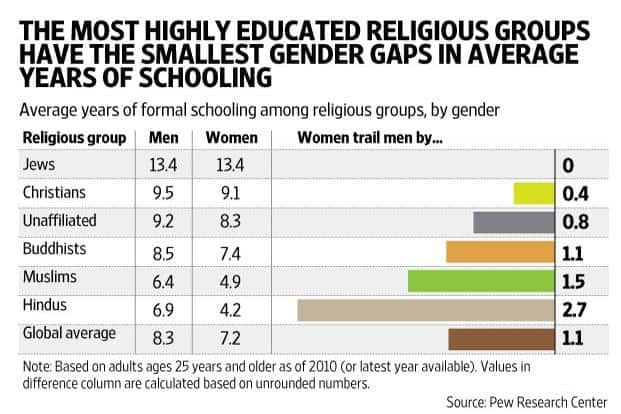 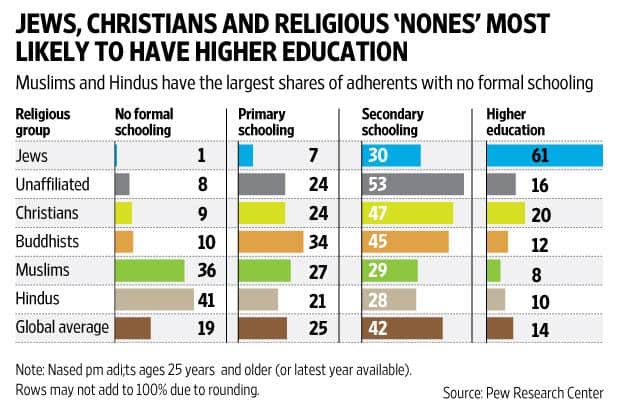 Muslims also have reduced the gender gap across generations by 11 percentage points. But in the youngest generation, a 10-point difference remains: 33% of Muslim women and 23% of Muslim men have no formal schooling. Among religiously unaffiliated adults and Buddhists worldwide, meanwhile, the gender gap in the shares with no formal schooling has virtually disappeared.