"storyDirectUrl"
OPEN APP
Home / Politics / Policy /  Why does the labour code not talk about safety of 85% of workforce?

Why does the labour code not talk about safety of 85% of workforce?

Govt's intention to merge labour laws into 4 codes right but these exclude safety, health of large chunk of workforce

Four years on, it’s a scrappy job, with none of the codes ready to be tabled in Parliament. Continuous protests by workers’ groups and trade unions affiliated to different political parties, including one to the Rashtriya Swayamsevak Sangh (RSS), the ideological parent of the ruling Bharatiya Janata Party, have stalled efforts. While the government terms the reform essential, critics say it is “not inclusive".

Ahead of the winter session of Parliament, the labour ministry is making one last push and has taken up the labour code on occupational safety, health and working conditions on a priority. The intention is right, and the choice of laws to merge under this code is largely correct, and the exercise would perhaps benefit the present world of work by bringing certain coherence in 13 laws that were framed between 1948 and 1996. These laws govern factories, mines, migrant workers, docks and ports, and contract workers among others.

But what it lacks is scope —it does not cover over 85% of India’s labour market who are employed either in small companies deploying 10 or less workers, or in the informal sector. 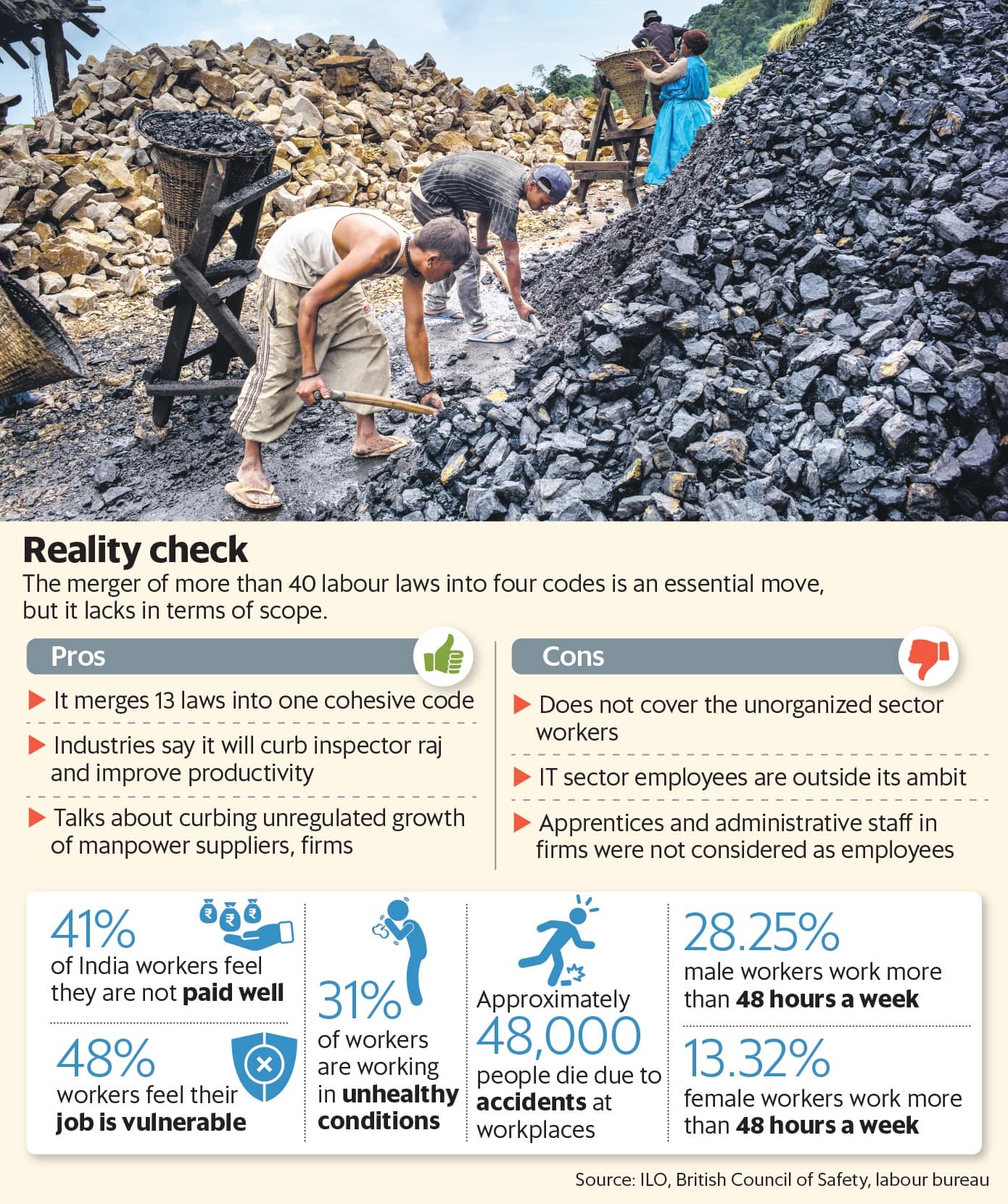 “The objective is fine, but is this code talking about all workers in the 470-million plus labour market? The answer is no, and the draft law is not inclusive," said C.K. Sajinarayanan, president of the Bharatiya Mazdoor Sangh (BMS), the largest trade union body in the country and an affiliate of the RSS.

A.K. Padmanabhan, president of the Left-aligned Centre for Indian Trade Unions concurs. “The present government wants to count jobs in informal sector, it talks about the loan it has given to people to start or expand tiny business, it supports fixed tenure jobs, and it talks about present day realities. Why then does this code exclude the lion’s share of the working population in India and does not take care of their safety, health and working conditions?" Padmanabhan argued.

But that’s one side of the story; in 2018, you cannot have laws of the 1950s governing your industries or workplace, said Shankar Agarwal, a former labour secretary.

“Competitive noise will not be of great help. Safety of workers, social security, job protection are key but industrial growth is important for all the above factors too," Agarwal said, adding: “Should India hesitate to accept contractual jobs, should we not promote ease of doing business in manufacturing and should we not regulate unregulated growth of manpower suppliers?"

Pankaj Bansal, chief executive of human resource firm PeopleStrong said the merger of these 13 laws under one will reduce unwanted paperwork of industries leading to more productivity. He said the labour laws are so archaic that it is almost impossible to follow one law without flouting another.

“The world of work has evolved. Roughly 40% or more jobs will either completely or partially change. As the millennial workforce comes into picture, gig will be the way to go. In such a situation, we need laws which are relevant for the work of future and can also address the need of social, financial and physical security of people at work," Bansal added.

Critics and workers’ groups, however, are not convinced. Even global bodies like the International Labour Organization (ILO) has spoken about the lack of decent work in India and poor working conditions in the country. Last week, the ILO said some 31% of Indian workers are working in unhealthy conditions. Besides, around 41% of Indian employees feel they are poorly paid, a figure that is the fourth worst among the 22 countries in the Asia and Pacific region, trailed only by Bangladesh, Pakistan and Mongolia.

Apprentices and administrative staff in companies were not considered employees in the draft bill. Besides, the Shops and Establishments Act that governs the information technology (IT) sector among others is out of its purview, thus excluding IT from the reach of this law.

The draft law does not talk about working condition of journalists in TV or online media. It proposes to double the provision of overtime from 50 hours a quarter to 100 hours in some cases and from 75 hours to 125 hours.

BMS sums up the code echoing a larger working class sentiment: “Reforms should have a human face...ease of living is equally important along with ease of doing business".