Thanks for Visiting Mint
You seem to have an Ad Blocker on. Please turn it off in order to continue, or whitelist Mint
HOW TO TURN OFF AD BLOCKER
OR
REFRESH IF YOU ALREADY TURNED OFF THE AD BLOCKER
Home >Politics >News >Fertilizer companies may need to prove subsidy goes to farmers

Fertilizer companies may need to prove subsidy goes to farmers

New Delhi: The government may soon ask companies selling non-urea fertilizers to certify that they are passing on state subsidy benefits to farmers.

Junior fertilizer minister Srikant Kumar Jena has raised this issue in a 18 July internal note, which Mint has reviewed. 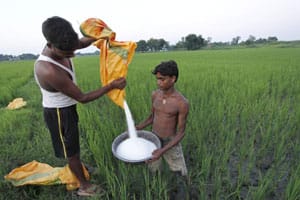 The retail prices of non-urea fertilizers were freed in April 2010, but the government continues to subsidize them. The retail price of urea, the most dominant fertilizer, continues to be regulated. Almost the entire demand for non-urea fertilizers is met via imports, either in intermediate or finished form. The domestic demand for DAP is 11-12 million tonnes (mt) a year, the second highest after urea. While 6-6.5 mt of DAP is imported, the rest is produced locally. The demand for MoP stands at 5-6 mt.

The letter has come at a time when the ministry has begun a similar exercise to determine how much of the subsidy given on non-urea fertilizers has been passed on to farmers, a ministry official said, requesting anonymity. The exercise will help determine the impact of freeing prices in the last two years. The ministry was considering such an exercise, Mint first reported on 24 October. This official said the ministry is collating figures for Gujarat State Financial Corp. and Fertilisers and Chemicals Travancore Ltd, but the exercise could extend to all firms. The chief ministers of some states have opposed the increase in prices of non-urea fertilizers.

“The government should pass subsidy directly to the farmer and get the industry out of this mess. There is no other solution," said Tarun Surana, an analyst with Mumbai-based Sunidhi Securities and Finance Ltd. “Moreover, the price increase is on account of hardening international prices over time and the depreciating rupee; so the government cannot blame the industry for it."

In his latest letter, Jena has also said firms pushed “extremely high volume" of non-urea fertilizers to dealers between January and March “in the name of prepositioning when the stock was not required for consumption".

“This was clearly done to claim higher subsidy rates notified by the government for the year 2011-12 as compared to that for 2012-13," Jena said.

He said that while between 2004-05 and 2010-11, the average minimum and maximum sales of DAP in February and March were 400,000-500,000 tonnes, the figures in the same months this year were 1.19 mt and 1.46 mt, respectively. Similarly, in March, firms sold 500,000 tonnes compared with an average 225,000 tonnes in previous years. Jena said these “unprecedented" sales depict “explicit motive of the companies?to claim higher subsidies".

In a 5 July note, Jena had asked the ministry to consider freeing gas prices for that part of urea production where the cost is benchmarked to global prices. Mint reported this on 16 July.