Manaswini Acharya, professor of marketing at International Management Institute, Delhi (IMI) says it’s a different atmosphere in the B-school these days—there is a feeling of motivation because of a new boss at work.

“He is a hands-on director general, and gets involved in almost everything—from teaching to admission to placements," said Acharya, who is also dean, corporate relations and placements, at IMI, a business school promoted by RP-Sanjiv Goenka Group.

She is talking about Bakul Dholakia, a former director of Indian Institute of Management, Ahmedabad—a well-known figure in the academic world whose long list of students include Reserve Bank of India governor Raghuram Rajan and author and cricket expert Harsha Bhogle.

Dholakia is among several former directors and deans of the elite IIM schools who have recently joined private institutions and corporate universities.

Industry experts believe that the trend is an outcome of new private universities seeking to establish themselves quickly and are thus reaching out to reputed academics to lead their ventures. Such professionals bring value, better administration and brand name. On the other hand, ex-IIM directors and deans are driven by the challenging work, freedom in decision-making and “entrepreneurial mindset" of private-sector universities, along with offers of better salaries or compensation.

“We are looking for people who can take up challenging jobs and set up quality institutes from the scratch. We need professionals who understand both academic and market dynamics," said Akshay Munjal, president of BML Munjal University, a Hero Group initiative. “The numbers of such persons are few and we are always on the lookout for people to fit our vision." 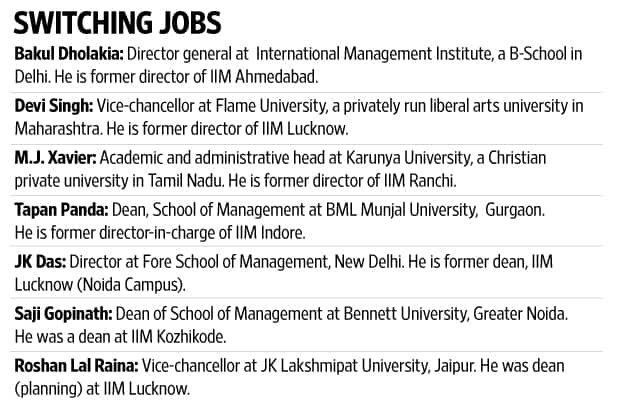 Devi Singh said, “I joined Flame because of their vision: to establish a quality multi-disciplinary university. The aim is not money but to do something better, or else I would not have joined."

Tapan Panda was more forthcoming. “Before joining the institute, I gave a presentation underlining my five-year plan, and they thought it right too. When an academician’s vision and his promoters’ vision match, then it becomes easier to work," said the dean at BML Munjal University. “In comparison to IIMs, decision-making is faster. There is no bureaucratic hassle. The goals are clear and performance leads to visible appreciation." He said people who are joining private universities want to be more innovative and create new institutions that are at par with IIMs.

According to J.K. Das, director of Fore School of Management, a private business school in Delhi, ex-IIM academics joining private universities mainly fall into two categories: widely-recognized veterans of their profession and a younger lot who can be described as education entrepreneurs in search of something unique.

“At IIMs, you just have to maintain status quo. Everything is in place but in a new venture, you have to utilize your knowledge and experience to create a better environment," added Das, himself a former dean at IIM Lucknow (Noida campus).

Kalpesh Banker, managing partner, EduShine Advisory Pvt. Ltd, an education consultancy, said that when a private university or institution hires a big name from the IIM stable, it gets instant connect with its audience—the students.

“Bringing students and keeping them is key, hence good names work as instant benefits. Besides, the experience and knowledge they bring is premium," Banker said.

Do they come with a better pay package? “It’s a simple demand-supply issue—if you want good people, you have to pay the premium," said Munjal.