Denver/New York: India’s millennial generation is bigger than China’s or the US, which will boost the nation’s labour force to the world’s largest by 2027, according to a Bloomberg News analysis of United Nations population-projection data.

Millennials are “the key demographic segment in India’s population and labor force," according to a research report by Morgan Stanley. “India’s strikingly young population is in sharp contrast to that of other large economies such as China, the US, and Europe."

India’s millennial population is larger than China’s or the US’, according to Morgan Stanley, which defines the group as between the ages 18 and 35 years. The population in that youngest worker age bracket will continue to rise in India, the researchers note, even as it contracts in the US and China. 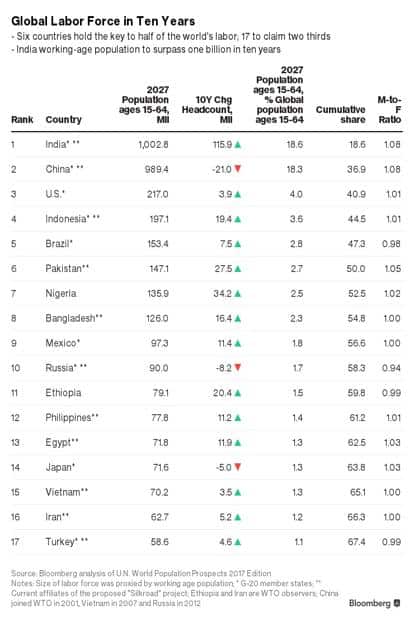 In fact, China’s overall labour force will decline by 21 million people, followed by an 8.2 million-worker drop in Russia and a decrease of 5 million in Japan over the next decade, the new data show. The US will hold onto the distant No. 3 spot, shrinking to 4% of the world’s labour force from 4.3% over the next 10 years. Indonesia is projected to come in at No. 4, and Brazil will round out the top five with 2.8%.

Today, half of the world’s labour force lives in India, China, the US, Indonesia and Brazil, but in 30 years, the global labour force will become less concentrated as India, Pakistan and African nations make up a growing share of the pie. Sub-Saharan Africa is expected to account for more than one-in-five workers globally by 2047. Bloomberg