Mumbai: The controversial Sethu-samudram channel project that planned to dredge a navigable shipping channel around India is forging a global alliance of environmentalists, scientists, economists and millions of believing Hindus in countries from Austria to Kenya, and Mauritius to the US.

They are adding more voices to questions that have already been asked in India: Does the project make ecological, economic and environmental sense? Does it offend the faith of Hindus? 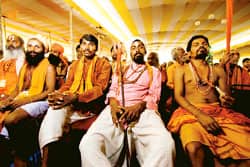 Matter of faith? A file photo of a meeting called on the issue of Sethusamudram in New Delhi last year. When the dredging began in July 2006, Hindu groups across the country began protesting, derailing the project (Photo by: Harikrishna Katragadda/Mint)

The project began in 2004 when the government approved a Rs3,500 crore effort that planned to create a shipping channel by dredging a walkway connecting India and Sri Lanka. Many Hindus believe the god-king, Ram, built this bridge with an army of monkeys to rescue his wife, Sita, from the clutches of demon-king Ravan. Others say it is a coral walkway.

So, when dredging began in July 2006, Hindu groups across the country began protesting and the project derailed. Last August, when politician Subramanian Swamy alleged that there was a plan to use explosives to blast the bridge, the Supreme Court intervened and issued a stay order asking the government to stop dredging the bridge. Since then, the government has not been able to get the stay lifted.

However, even though the fate of the project is unclear, six dredgers—Dredger XVI owned by Dredging Corp. of India Ltd; Pacifique owned by Belgium-based Dredging International; Banwari Prem and Triloki Prem owned by Mumbai-based Vector Shipping Services Pvt. Ltd; Darya Manthan owned by Hong Kong-based Chellaram Shipping Ltd; and Prof Gurjanov owned by the Russia-based Baltdraga Ltd—are still dredging the ocean at the mouth of the channel in Palk Straits.

It is not clear exactly how much work has been completed in the Straits so far.

The project website that used to track dredging status on almost daily basis has not been updated since October. Meanwhile, unofficial figures on work status from shipping minister T.R. Baalu have varied between 50-75%.

Like everything else in this project that has acquired a hazy status, there is no data available about how much money has actually been spent on the project so far.

Meanwhile, as lawyers prepare for the eighth Supreme Court hearing of the case, heritage groups are planning strategy meetings in London and environment lobbies of Indonesia are gearing up to stage protests at the United Nations Environment Programme convention in Bali in August. India is a signatory and will be present at this convention.

“We will also be organizing a two-day conference in Europe next month on this project to raise awareness and draft a strategy to ensure these are recognized as world heritage," said Vyas.

In 2005, the United Nations Educational, Scientific and Cultural Organization (Unesco) declared the Ramlila, or the traditional performance of the Ramayan, as the world’s intangible cultural heritage. The declaration has raised hopes that it will recognize the Ram Sethu, or Adam’s Bridge, as a world heritage site as well.

However, only the Indian government can approach Unesco for such a declaration.

Their strategy is to evolve a common voice against the project. But, it may not be working because even as these groups gear up for battle, litigants from India, Janata Party leader Swamy, the Rashtriya Swayamsevak Sangh and the Vishwa Hindu Parishad (VHP, seem to believe that the project is on its deathbed. “It’s almost over now. It will be very hard for the government to do this project now," said VHP general secretary Vyankatesh Abdeo. PMO didn’t respond to calls or emails.

And, it isn’t that most Hindus outside India are involved with the project, notes Vijay Prashad, professor of International studies at Trinity College in the US. He studies the south Asian community there and says only a small section of hardcore “Hindutvawadis" are on to this project.