Mumbai: A court on Monday convicted three people, including a husband and wife, of planting bombs that killed 52 people in the city in 2003.

Auto-rickshaw driver Haneef Sayyed, 46, his wife Fahmeeda, 43, and 32-year-old Ashrat Ansari were convicted of conspiracy and murder in connection with the twin blasts that also injured more than 150.

According to the police, the blasts—at the landmark Gateway of India monument and in the Zaveri Bazaar gold and jewellery quarter—were in retaliation for Hindu atrocities against Muslims during riots in Gujarat in 2002. 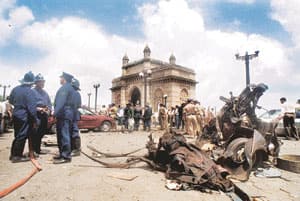 Gujarat revenge? A 25 August 2003 file picture shows Mumbai police and firemen conducting investigations at the site of a car bomb explosion at the Gateway of India. As many as 52 people died in the two blasts. Vikas Khot / AFP

Speaking outside the special anti-terror court, where the trial was held, prosecutor Ujjwal Nikam said they were linked to the banned, Pakistan-based militant group Lashkar-e-Taiba (LeT).

“This is the first case in (Indian) legal history in which a husband and wife were involved in a criminal conspiracy to explode bombs," he told reporters. “LeT has received a major blow because three LeT hardcore terrorists...have been sentenced under Pota (Prevention of Terrorism Act) for bombing Mumbai, killing people and terrorizing people," Nikam said.

A Pakistani man is currently on trial for separate attacks on the city in November last year in which 183 people died. He is alleged to be the only survivor of 10 gunmen equipped and trained by LeT.

Nikam said the 2003 blasts, plotted in Dubai, happened after an earlier attempt by LeT to target Mumbai in an attack on a bus that killed two people.

“Their (the defendants’) handlers were not happy with the intensity of the blast so they used RDX (explosive) in August 2003 and exploded a major bomb," the lawyer added. Nikam said the crimes were “of a very serious nature and...we are going to ask for the harshest punishment (death)" when they are sentenced.

Defence lawyer Sushan Kunjuramaran said he was shocked at the court’s decision and would consider an appeal.

At least 2,000 Muslims were killed in the 2002 attacks in Gujarat, which erupted after 59 Hindu pilgrims died in a train fire which was at first blamed on a Muslim mob.

A subsequent inquiry concluded the fire was accidental.

Both the Mumbai bombs were hidden in the boots of taxis and exploded within minutes of each other at lunchtime on 25 August 2003.

Two other men accused of providing and assembling the high-explosive RDX devices used in the attacks were previously acquitted by the court.

Some 103 prosecution witnesses were examined and four for the defence. A sixth accused—unnamed for his own protection—allegedly involved in the conspiracy gave evidence against Sayyed, his wife and Ansari.

The case was the biggest anti-terror trial in Mumbai since the 1993 “Black Friday" bombings in which 257 people were killed and at least 800 others were injured.

The 1993 attacks were believed to have been staged by Mumbai’s underworld in retaliation for widespread Hindu-Muslim riots a few months earlier after the destruction of the Babri mosque in Ayodhya in Uttar Pradesh by Hindu radicals.