New Delhi: Railway minister Mamata Banerjee faces the unenviable task of delivering on her recent promises of reform when she presents the 2010-11 Railway Budget on Wednesday, while balancing a measure of populism with assembly elections in West Bengal set for next year.

Banerjee bolstered her populist credentials in her previous budget and, in December, she exhibited a reformist bent announcing a 10-year, Rs14 trillion vision for Indian Railways. Her budget for 2010-11 could set the stage for how the railways changes the way it works.

Funding remains a significant roadblock, with a Rs51,000 crore gap between the amount Banerjee says she wants to spend every year and this year’s budgeted revenue figures. 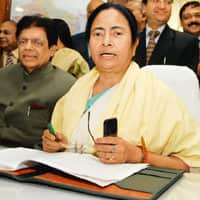 Challenges ahead: Railway minister Mamata Banerjee after giving final touches to the Railway Budget in New Delhi on Tuesday.Ramesh Pathania/Mint

A railway official, who did not want to be identified, said the department has asked the Planning Commission for a special Rs5,000 crore fund to take up delayed projects.

The railway minister had in her “Vision 2020" asked for some Rs50,000 crore in grants from the Union government to complete a 11,000km backlog of new lines.

Other officials say the ministry is also working on a policy for the private sector to recoup investments by charging for access to rail tracks.

The railways’ infrastructure for industry initiative for attracting private sector participation in rail connectivity projects will also be revamped, officials said at a recent meeting between the Railway Board, the top management body of the railways, and industry executives.

Banerjee, too, indicated in a 6 February meeting with industry executives that the government was willing to look at private sector investments to build new lines.

She might also announce the setting up of a corporation for a dedicated corridor to pilot her proposed 2,000km of highspeed inter-city rail routes, feasibility studies for which are under way.

The minister had presented her previous budget against the backdrop of a bloated wage bill and a fall in freight volumes from the expected 850 million tonnes (mt) to 833 mt in 2008-09. Revenue from commercial development of the railways’ vast land banks did not materialize either.

But the revenue reality is more nuanced than an increase of nearly 70 mt in freight carried would indicate. Another railway official, who too did not want to be identified, said the national transporter had earned a revenue of Rs64.5 crore per mt of freight until December against an internal target of Rs66 crore—which could crimp the minister’s ability to allocate resources for capacity expansion.

“Last year was a triple whammy (for Banerjee)," said Akhileshwar Sahay, a former railway employee who now works for infrastructure consultancy Feedback Ventures Pvt. Ltd. “I believe this Budget should come out with two concrete things—a very strong push towards execution of promises made and a strong push in private sector investment in construction of new lines."

But analysts point out that while Banerjee has pondered the financial direction for the railways, she had dodged the issue of anti-collision technology. The railways saw three major collisions in the past year.