Minimum fine raised for all offences by as much as 10 times, with Rs10,000 for drunken driving and Rs5,000 for driving without a licence

New Delhi: The Union cabinet on Wednesday approved a bill that proposes a range of steep fines for traffic violations, including up to ₹ 10,000 for drunken driving—measures to introduce discipline on some of the world’s most dangerous roads.

“It is a historic step towards making our roads safe and saving lakhs of innocent lives," road transport and highways minister Nitin Gadkari said about the Motor Vehicle (Amendment) Bill 2016.

Describing it as the biggest legislative reform in road safety and transport, Gadkari said he hoped the bill will be taken up by Parliament next week and urged all parties to support it. 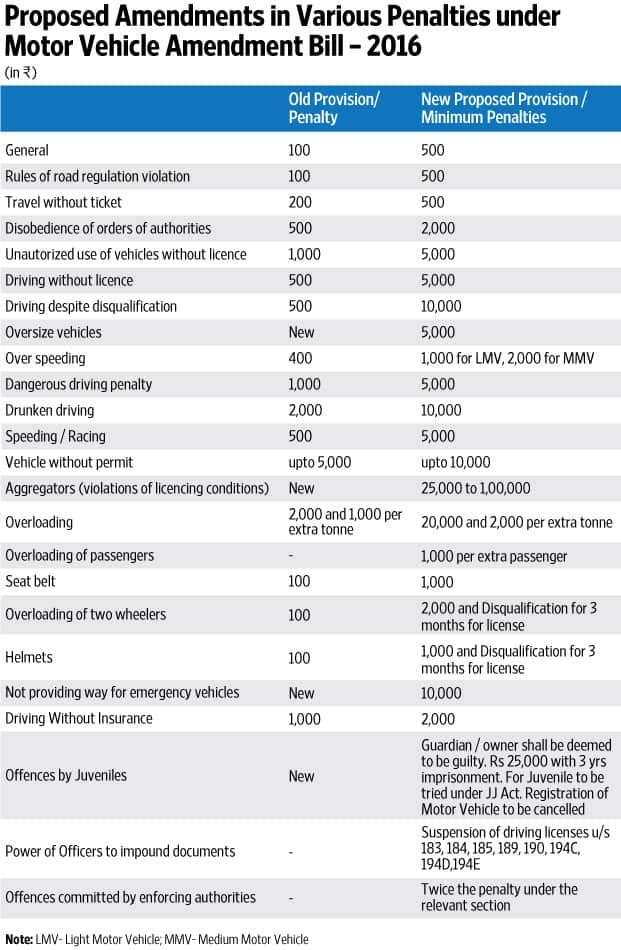 The government also proposed a new fine of ₹ 10,000 for not giving way for emergency vehicles and fining taxi aggregators ₹ 25,000-100,000 for violations of licensing conditions.

Perhaps addressing the public concern generated after a minor killed a 34-year-old man with his speeding car in Delhi earlier this year, the government proposes to hold the guardian or owner of the vehicle guilty in cases of traffic offences by juveniles and trying juveniles under the Juvenile Justice Act. It also proposes a fine of ₹ 25,000 with three years’ imprisonment and registration of the motor vehicle to be cancelled.

Other important provisions include increases in compensation for hit-and-run cases to ₹ 2 lakh from ₹ 25,000. It also has a provision for payment of compensation of up to ₹ 10 lakh in fatal road accidents.

Every year 500,000 road accidents are reported in India, in which 150,000 people lose their lives, and government has vowed to reduce the accidents and fatalities by 50% in five years.

Other major features of the proposed bill are a focus on e-governance for improving delivery of services such as enabling online learning licences; increasing the validity period for driving licences; and doing away with the requirements of educational qualifications for transport licences.

In an another major decision for the transport and highways sector, the CCEA authorized the NHAI to monetize public funded national highway projects which are operational and are generating toll revenues for at least two years.

“This monetization will be subject to approval of the competent authority in Ministry of Road Transport and Highways / NHAI on a case to case basis. 75 operational NH projects have been preliminarily identified. This has been done keeping in mind an efficient operation and maintenance framework which will result in reduced involvement of NHAI in projects post construction completion," the official statement explained.

It is also hoped that the corpus generated by the monetization could be utilized by the government to meet its fund requirements for future development.

“It is anticipated that this will lead to a new vertical of developers for the operation and maintenance of highways and eventually lead to an enhanced quality of service for highway users across the country," the statement added.

Further, in a move to ease payments to farmers and achieve export targets, CCEA extended the production subsidy offered to sugar mills. “The subsidy at the rate of ₹ 4.5 per quintal of cane crushed will be provided to sugar mills proportionate to their achievement on export and ethanol supply targets," said the statement.

The cabinet also approved the rates for spectrum usage charge (SUC) for various bands of spectrum for which auctions are going to be conducted shortly. The cabinet in June had okayed rules for the spectrum auction in which airwaves worth ₹ 5.66 trillion will be put up for sale.

“This will facilitate to move to a simple, transparent and flat ad-valorem SUC regime in accordance with the law and avoid creative accounting to bypass the revenues," the statement noted.

Last week, the Telecom Commission had upheld its earlier recommendation of calculating SUC as per a weighted-average formula while adding that the minimum SUC payable shall not be less than 3%.

The move will impact Reliance Jio Infocomm and Aircel Ltd the most because as per the department of telecommunication’s earlier weighted average formula, they would have paid only 2.88% and 2.83%, respectively.

The sub-group divided CSSs into three categories—core, core of the core and optional—and recommended that such schemes should not exceed 30 at any time. It also suggested funding pattern for each scheme.

“The rationalization of the CSSs would ensure optimum utilization of resources with better outcomes through area specific interventions. This would also ensure wider reach of the benefits to the target groups," said a cabinet statement.

The upgradation is targeted to be completed in three years’ time and involves creation of tertiary care facilities at the GMCIs. The cabinet allocated a sum of ₹ 200 crore to each GMCI for the upgradation, shared by the centre and state in the ratio of 60:40.

The Union cabinet also approved 35 amendments and 86 new entries, as recommended by the National Commission for Backward Classes in the central list of other backward classes (OBCs) applicable to Andhra Pradesh and Telangana.