Mumbai: The latest gross domestic product (GDP) numbers show that the Indian economy grew at an impressive rate of 8.2% in the April-June quarter, the fastest quarterly growth in over two years. However, this has not shielded the government from criticism over its handling of the economy. The falling rupee, worsening current account deficit and stress in the banking sector have all raised questions over the sustainability of the recent economic recovery.

As India’s GDP numbers are released with a lag of three months and given the persistent doubts surrounding the calculations of the new GDP series, it becomes important to track other high-frequency indicators to gauge the state of the economy. Starting this month, Mint will track 16 high-frequency indicators to assess the health of the Indian economy in a monthly macroeconomic tracker. The 16 indicators capture trends across four aspects of the economy: consumer spending, industrial activity, external vulnerability and “ease of living" (which measures inflation and the jobs scenario). In recent months, all four indicators of industrial sector activity—Purchasing Managers’ Index, core infrastructure industries’ growth, bank lending and rail freight volume—have improved. All the four industrial indicators have performed better or in line with the long-term five-year trend. In Mint’s Macro Tracker, performance bettering the five-year trend is highlighted in green, while underperformance is highlighted in red.

However, despite positive signs in industry, indicators of external sector performance and ease of living suggest vulnerabilities in the Indian economy. India’s current account deficit has worsened in recent months while the rupee continues to fall. Meanwhile, the global “trade war" poses further risks to India’s exports. India’s trade deficit, even non-oil, has massively widened in the last couple of years and the share of exports in GDP has declined sharply (read more here).

Along with external challenges, the Indian economy also faces domestic constraints. Three of the consumer economy indicators are in the red (below the five-year average) and investment spending remains muted despite a recent pick up. Gross fixed capital formation (GFCF), a measure of investment in the economy, amounted to 31.6% of GDP in the June quarter, down from 34.3% of GDP in 2012. Looking ahead, the GFCF-to-GDP ratio is unlikely to reach those levels even by 2022-23, by when the investment rate will likely peak at 33%, according to a recent Reserve Bank of India (RBI) research paper.

Data on fresh investment projects from Centre for Monitoring Indian Economy also does not inspire much hope of an investment turnaround in the economy in the coming quarters.

In the coming months, risks are likely to increase. Bank credit growth has been hit owing to the bad debt problem in the banking sector. Credit growth remains slower compared to 2013 levels, despite recent uptick. 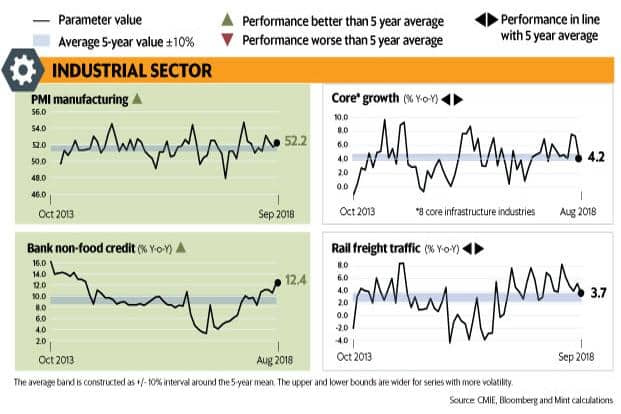 The non-banking financial sector is also in crisis, facing a credit crunch following a string of defaults by Infrastructure Leasing and Financial Services Ltd (IL&FS). Such stress in the financial sector can hamper the functioning of rest of the economy.

Meanwhile, the rural economy has continued to underperform. Rural wage growth has remained subdued for much of the tenure of the Narendra Modi government, while other data point towards worsening terms of trade for farmers.

Thus, not surprisingly, the government has had to periodically face farmers’ protests.

Attempts at ameliorating rural distress through increased minimum support prices might lead to higher fiscal deficit and possibly inflation. In fact, the overall benign inflation in recent years —one of the achievements under this government—can be partially attributed to weak rural demand due to low wage growth, according to a recent HDFC report. 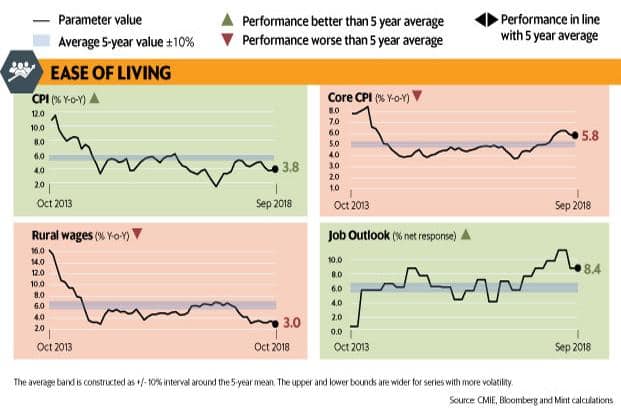 Thus, financial market volatility, uncertainties on the global front, and maintaining fiscal discipline in the run up to the elections, are the major challenges facing the Indian economy right now.

In the coming months, as Prime Minister Narendra Modi heads into the final phase of his tenure, his response to these challenges could be critical to his chances for a second tenure. And the Mint Macro Tracker will be here to track his progress.