Oxford University economist Max Roser says the world needs to be told things are improving, though there are also huge challenges

New York: Max Roser belongs to what may be called the Hans Rosling school of fact-based optimism. Rosling, a Swedish professor who achieved rock star status, is the author of Factfulness, the bestseller from this year that proves that our world may, in fact, be changing for the better, based entirely on data. Roser, 35, is an economist at Oxford University and founder of Our World in Data, an online resource that uses data on long-term social and economic trends to track global progress.

Our World in Data shows positive trends in health, education and standards of living, and is based on Rosling’s argument that such knowledge should be both accessible and easy to consume. In Roser’s telling, data sometimes turns into anecdotal stories. In an entry on global poverty, he cites the example of Nathan Rothschild, the richest man in the world when he died in 1836 of an infection that can today be treated with antibiotics sold for less than a couple of cents. Only the very poorest people in the world would die in the way that the richest man of the 19th century died, an indication of how difficult it is to judge and compare levels of prosperity and poverty.

Roser is quite clear about how he sees the world—we are less violent and more tolerant; we are leading healthier lives, and are better fed, and poverty around the world is declining rapidly. Last year, he tweeted, “Newspapers could have had the headline ‘Number of people in extreme poverty fell by 137,000 since yesterday’ every day in the last 25 years." This has now become one an oft-quoted statistic to demonstrate reduction in global poverty.

This is relevant to India. The World Bank defines extreme poverty as those living on less than $1.90 a day. Recent data from different agencies in the world indicate how India has swiftly reduced extreme poverty over the past 30 years. Extreme poverty is a low bar and much more remains to be done though. Roser was recently in New York for Goalkeepers, an annual event hosted by the Bill & Melinda Gates Foundation, where he was recognized for his work as a social innovator. Mint caught up with him on the sidelines of the conference.

There is some amount of scepticism around the idea of positive data, since the assumption is it can hinder us from focusing on intractable problems. What’s your take?

If we don’t tell both aspects at the same time—that things are improving but there are also huge challenges and huge injustices in the world today—then, you would be making a big mistake. We can’t solely focus on the optimism story. I think that would be dangerous too. I think, overall, a lot of people are aware of the injustices and the big problems that the world is facing. But it’s often surprising to people if you give them the perspective of slow improvements over time, because that’s what many of us are less aware of. I’m trying to do both—that things are improving, but we’re also still facing some big problems.

Let’s look at India’s figures on poverty reduction. Absolute poverty may have come down, but there are still so many people who are living just a little above the extremely low poverty line. How does one address that?

We have this very low poverty line of just $1.90 per day as the definition for extreme poverty. And surely, someone who lives just above 1.90 dollar is still poor and the journey definitely isn’t over once we have lifted people just above the poverty line. Someone who earns five dollars or ten dollars is still living in poverty I would think. But it makes sense for global comparisons—to find out where the poorest people on the planet are. 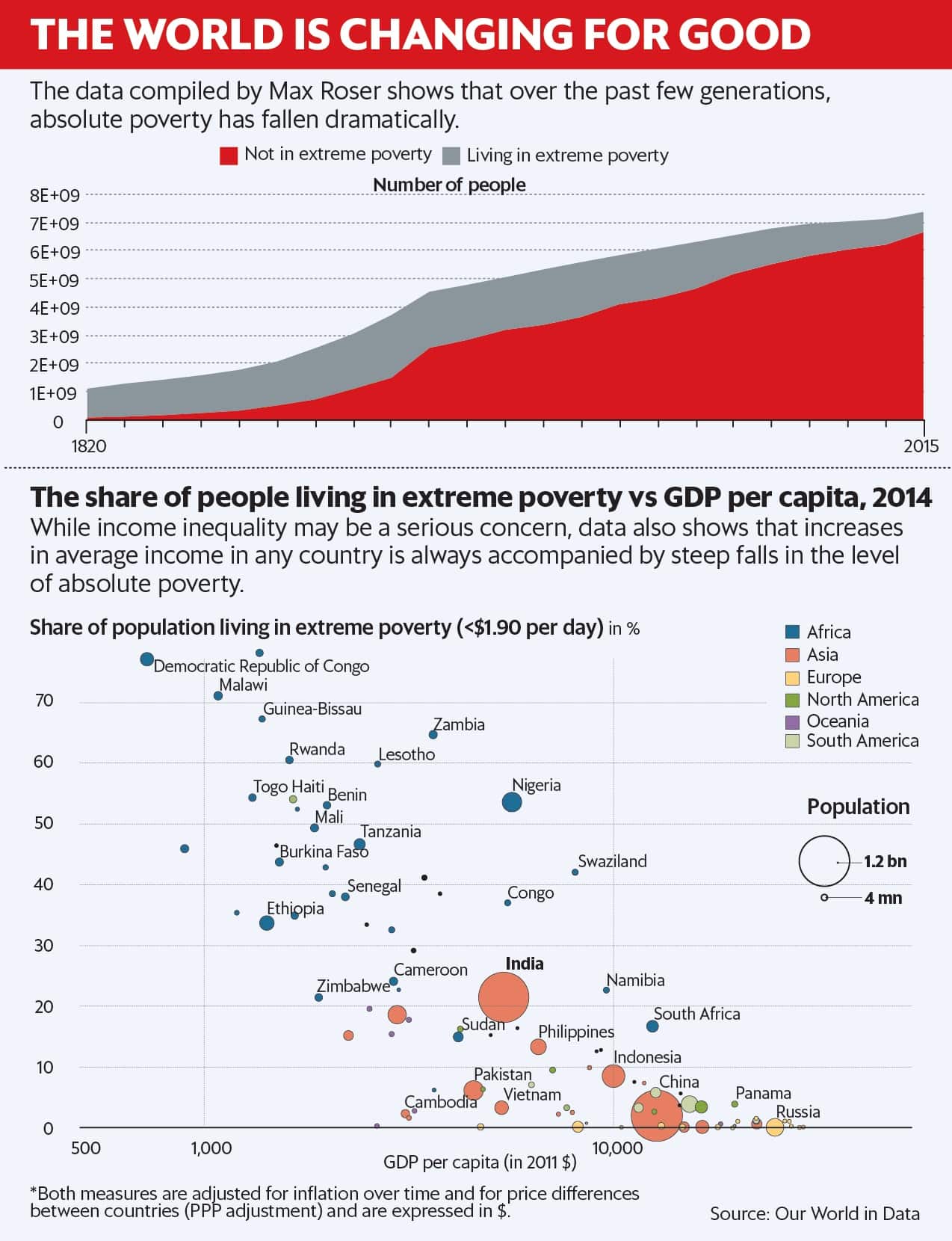 What would you say is the value of focusing on positive trends, based on the work that you’ve done?

I think the value is that it shows that change is possible. I think too many people have this idea of the world as a place of stagnation at best, or probably a place where things are just getting worse. If we don’t show that things are changing, and in a positive direction, we don’t have the perspective of what’s possible. At the most fundamental level, that’s probably true for everyone. If you don’t know that you could make a difference with your work, who would start getting into any work. I think the mechanism that is at play is a very similar one, at a personal level or at a global level. You’ve got to see positive change to get engaged in something.

In a country like India, data collection is a huge challenge. Enough data is not recorded, which can then influence policy. How do you get past that, and do you think the scenario is changing?

Data collection is a big issue. It’s also a bigger issue probably in a country like India. If we’re talking about poverty, for example, we have basically two sources for the data. One is to start at the individual level and ask households, through surveys, what food did they consume in the last month, where did they spend their money. From these particular surveys, we aggregate the numbers. Then, we have this other starting point of aggregate production in the entire country. We have to bring these two aspects together, the individual level and the total economy level.

But things are changing slowly. Some new and exciting methods like using satellite imagery are catching on. For example, in India, there were a couple of studies that used night-time lights as a measurement of what’s happening to people’s incomes and living standards. As incomes grow, people have the opportunity to switch on lights at night and you have light on the streets at night and you use that change which is actually visible and available easily to understand what’s happening to economies.

Do you think data collection will improve with digitization and the spread of technology in India and other countries? What are some big challenges that remain?

I don’t think it’s clear that we are going to improve much. Sure, there are some new ways of getting data, like satellite images. A lot of conversation is happening around big data, where we use the data of people accessing social media. It’s basically data this is collected accidentally—people who reveal some information by accessing Facebook or other social media—which we can use to make sense of what’s happening to the population. Surely, we should learn something from that. It has the benefit of giving us a very up-to-date picture of what’s happening in a place since getting national-level statistics sometimes takes a couple of years to aggregate. The global poverty figures that we currently have for 2018 is 2015 data.

Big data surely has an advantage in getting us more up-to-date information, but then I think we won’t get around the fact that we will still need to actually go from household to household conducting surveys on a representative sample of the population. Because, obviously, the population that is using social media is a particular subgroup.

But people are becoming increasingly disinterested in household surveys.

Surveys will remain the crux of data collection for the foreseeable future, but we know that survey response rates are very low and that people turn down requests from statistical officers. I think it’s also important to make the point that data is important and that you’re contributing to vital information by agreeing to take part in surveys. We do have this particular problem, which is possibly also true in some parts of India, that as people get richer, they are less likely to respond to surveys. They may be working outside the household and, hence, also may not available in the house. There are several reasons why people are less responsive once they get richer and that might be one of the reasons why, in India, we have this discrepancy between what’s reported in the household survey data and what’s reported by the aggregate statistics. The survey response rate might be falling as people’s incomes are growing.

From the time you started your project, have you seen any difference in the quality of data that you can collect as technology also improves?

I think it’s slowly happening. In responses through surveys that are conducted with mobile phones for instance, we see some changes. There are interesting questions being asked in an effort to try and understand how satisfied people are with their lives; which particular activities are linked to greater satisfaction in people’s lives. Individually, we are often surprisingly bad at predicting what makes us happy. So, there are these techniques where people use their mobile phone and they are asked at random times during the day to report how happy they are with their day and what they’re doing. That is something which would have been impossible to even think of ten years ago. But now, we can understand in real time during the day what people do in their lives and how it affects their life satisfaction.

What is the most surprising data point or fact that you think you’ve come across in your work?

It’s been a journey full of surprises, obviously. But one thing that I didn’t understand before I really got into this is to rewind the changes that we’ve seen in the countries that are rich today in order to see how similar they were to the changes we are witnessing in the countries that are catching up today. We have this idea, or I had this idea, that the rich part of the world had been rich for a really long time; that people had been well-off and healthy and well-nourished. And that there’s been a poor part of the world, where people are poor and malnourished and sick; and this split in the world has been around for a long time and will be around for a long time. But looking at data, specially at more historical data, showed me that the places that are rich today actually left poverty and poor health behind quite recently. I was very surprised at how fast and how recent the positive changes around the world are in a lot of different aspects.

What insights from data make you the most optimistic and what make you pessimistic about the world?

If we look at education levels of older generations, we see that literacy rates were very low and if we look at the same data source for the younger generation, then we see how much the world has already changed. The fact that a more educated, younger generation is going to take over in ten, twenty years, I mean, basically, from today onwards, I think that is something that should make us all more optimistic. And what makes me pessimistic is probably the state of the environment. There are some aspects on which we’ve achieved a lot. The action on ozone layer has been very successful, for example, but clearly, on most other environmental concerns, we haven’t made much progress and things are getting worse. It’s a deep concern that data continues to show that CO2 levels are rising fast in the world.

Sunaina Kumar is an independent journalist based out of Delhi. She was invited to the Goalkeepers conference by the Bill & Melinda Gates Foundation.