Recovery speed will depend on US policy over 12-15 months

Recovery speed will depend on US policy over 12-15 months

New Delhi: The president of the National Bureau of Economic Research, the largest economic think tank in the US, James Michael Poterba, says the challenge for the Barack Obama administration is to find out ways to cut the “unsustainable" level of fiscal deficit. Poterba, also a professor of economics at Massachusetts Institute of Technology, hopes the current crisis will be short-term in nature. 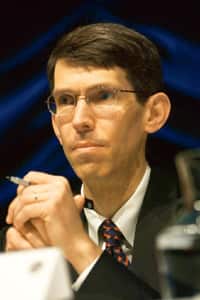 Point of concern: Poterba says the US does face a challenge of long-term fiscal sustainability, and the Obama administration knows it. Jay Mallin / Bloomberg

Mint caught up with Poterba on the sidelines of a special session organized in New Delhi by the industry lobby group Confederation of Indian Industry, or CII. Edited excerpts from an interview:

What are the key lessons for the US from the current crisis?

I think there are several elements. We can see that leverage levels in a number of financial institutions had gone to the point where they were not really consistent with preserving the capital adequacy in the market these institutions are operating in. Secondly, securitization and providing mortgage-backed security and the derivative products that are based on them, in principle and to a large degree in practice, are wonderful devices for sharing risks and lowering cost of borrowing for households. The same process that enables you to widely disperse risks can also raise agency problems (a conflict of interest arising between creditors, shareholders and management because of differing goals). And when that happens, we can end up with markets that don’t work as well as they should. I think the speed at which financial markets were evolving, the speed at which financial products are being developed and marketed may have gone a little bit ahead of regulatory environment at the time.

So that means the US financial market is up for stricter regulations?

My own guess is there will be (a) move for more regulations. I worry a little bit that it will be an overreaction to regulation. There is this possibility to straitjacket financial innovations in a way which can slow down the good things that have happened in the financial markets.

There is strong criticism from some quarters that the current bailout package that is being doled out in the US does not put money into the hands of people. And bailing out big corporate houses does not help the economy.

I think that view in some sense misses the point. The large financial institutions and large banks that were engaged in such risk activities and lost out money deserve to be bailed out and deserve to somehow get the federal government to pay for some of their losses. The problem is the very same institutions that did those things—so-called large risks— and lost are viewed as really important to the functioning of the broader US financial system and the global financial economy. So, the policymakers are caught in between a rock and a hard place. (If) they would like to preserve the operations of the financial market, they have to keep those institutions playing an important role. To do that they have to restore their balance sheets to the point which they can operate. Doing that to many people would look like you are just throwing money to the places where there are large risks taken which turned up badly. I think we are preserving the institutional capital of these firms to keep the rest of the economy operational. I think that is a very important distinction.

How serious is the kind of economic crisis we are facing? How soon will we recover?

This is fundamentally a short-term thing. The speed with which we will recover will depend a lot on what government policy the US takes in the course of 12-15 months. And we don’t know what that is going to look like yet. So, it is premature to call the end of this.

What major economic challenges is the administration likely to face?

It is not an imminent problem, but the US does face a challenge of long-term fiscal sustainability. The longer we wait to deal with it, the harder it gets to fix it. It will be difficult to sustain the kind of deficit that we are going to see next year for a long period of time. I think the Obama administration knows that and I have no doubt that they will be thinking about it. They have to balance the short-term fiscal stimulus and think about the long-term as well.

The financial crisis has hit the US consumer very badly. What changes in consumer behaviour do you anticipate?

The US consumer has suddenly realized that house prices can go down. So, one of the sources of continuous balance sheet improvement looks weaker than they thought. And at the same time they have discovered that their retirement accumulation in stock holdings can fall.

Those two pieces of news have come as a pretty big shock. We are also seeing the unemployment rate drifting up, which means people are being reminded that sometime(s) you may lose your job. And together that is producing a sombre mood in the US household sector. I think we will see a rising savings rate (in the US), even during the (economic) recovery. There is no question about it.

What you see as the long-term impact of the present crisis?

The slowdown in growth in the developed world is certainly going to have some average consequences on the growth trajectories of developing countries simply through the export channel. I think the financial market stresses will possibly limit the availability of credit and investment for some projects in the developing countries. I am hoping that those effects will be relatively short-lived but they will definitely affect them.