Why trade is integral to human advancement

With the introduction of a goods and services tax in July, India will be one step closer to a common market. Most economists agree on the benefits of economic integration but to understand the profound impact of such integration on modern societies, one can do no better than to turn to the work of a young Stanford University economist, Dave Donaldson.

Donaldson, who has been in the news for winning the prestigious John Bates Clark Medal this year, recently authored a fascinating research paper (bit.ly/2swMaYE) with his frequent collaborator Arnaud Costinot of the Massachusetts Institute of Technology on agricultural trade within the US which showed that gains from intra-country trade were roughly equal to gains from productivity growth.

Donaldson and Costinot collected data on crop markets for more than 2,000 US counties spanning more than 100 years between 1880 and 1997. The duo consider the price gaps between different places for the same crop as an implicit measure of transaction cost. If market integration did indeed work, these price gaps should decline. Costinot and Donaldson documented that this fall in price-wedges resulting from greater market integration has the same effect on total output as that arising from greater farm productivity.

It is because of such careful empirical work based on data running across many years that Donaldson has won the Clark medal this year. The Clark medal is the second most prestigious award in economics after the Nobel Prize, and is conferred every year on an outstanding American economist under 40. Twelve of the 39 economists who have won the medal have gone on to win the Nobel Prize in economics.

Donaldson’s most famous work, which was cited in the statement announcing the award, is on India, and it shows how creating the right infrastructure at the right time can remove barriers to trade by lowering transport costs, and thereby lead to greater prosperity (bit.ly/2o2pYrr). Mining archival data, Donaldson looked at the economic impact of the Indian rail network, built during the British Raj.

After spending a decade collecting and analysing the data for this project, Donaldson concluded that the railway network’s expansion led to a fall in trading costs, increased goods traffic, and that the economic benefits greatly exceeded the cost of construction.

For his work on the Indian railways alone, Donaldson is a worthy winner of the Clark medal. But there is a broader scholarship to Donaldson that deserves our attention. The central element of this scholarship appears to be an inquiry into the historical patterns of intra-country and inter-country trade ties. Pick any Donaldson paper and you will find a very important question answered using data collected from archival material, and careful use of econometric techniques.

This is the basic takeaway from the Ricardian model: everyone gains from trade. Although the theory seems pretty straightforward and intuitive, testing Ricardian theory has been a difficult task in a world with many countries and varieties of goods. Given the predictions of the theory, many countries will already have specialized completely in certain goods and stopped producing others altogether, therefore making it difficult to find out the differences in “relative productivity" of workers, the variable that lies at the heart of the Ricardian model.

Donaldson and Costinot tackle this problem in an innovative manner in a 2012 research paper (bit.ly/2rjbnrJ). They turn again to agriculture, a sector in which scientific advances have allowed scientists to compute how productive different regions can be given differences in water availability, soil conditions and so on. If the Ricardian model indeed explains patterns of specialization, we should expect to find actual production patterns following patterns of productivity predicted by agronomists. Using Food and Agricultural Organization data for 17 major farm crops and 55 major agricultural countries, the duo show that the Ricardian prediction indeed holds true.

In a more detailed study (bit.ly/2rj8Fmg) published in The Review of Economic Studies, Donaldson, Costinot, and Ivana Komunjer of the University of California, San Diego, show how it is possible to calculate relative productivity levels even in case of manufactured goods by developing an alternative measure of “revealed comparative advantage". They then use this gauge to empirically establish that countries export those goods in which they have greater relative productivity levels. According to the study, “The removal of Ricardian comparative advantage at the industry level would only lead, on average, to a 5.3% decrease in the total gains from trade."

In a 1961 paper, Swedish economist Staffan Linder propounded the idea that local demand for a product spurs international trade. Countries with greater domestic demand for certain goods are also the ones that ship these products to other countries. If two countries demand different kind of goods, each will specialize in the industry for which it has the larger home market. Further, each will be a net exporter of goods in which it specializes.

Testing the theory that local demand affects exports, just like testing the theory of comparative advantage, is difficult. Donaldson and his co-authors compiled information on countries’ demographic composition and used that as a predictor of diseases. Using this information, they determine the demand for drugs within countries. They find (bit.ly/2smdKJ0) those countries that had greater local demand for certain kind of drugs also exported more of those drugs, providing a neat empirical validation of Linder’s insights.

In many ways, Donaldson’s work harks back to an earlier era of economic historians led by Nobel Prize-winning economist Robert Fogel, who pioneered the use of quantitative methods in economic history.

Historians were of the opinion that railroads were the engine of economic growth in 19th century US until Fogel showed in his 1962 Journal of Economic History paper (bit.ly/2swNrPn) that rail expansion had limited impact on economic development in the US.

Donaldson of course arrives at the opposite conclusion for India but given that unlike in the US, alternative modes of transport such as roads or inland waterways were barely developed during the British Raj, his analysis sounds plausible. However, like Fogel, Donaldson’s work also challenges the mainstream historical narrative of the British Raj and its impact on the Indian economy.

Most nationalists were opposed to the British investments in railways in India as they felt it was a drain on national resources. This was in line with the dominant view among nationalists that British rule was a drain on the Indian economy, and had led to deindustrialization of the economy.

The birth of “economic nationalism"—or the idea that India needed to be free because foreigners had ruined its economy—gave a boost to India’s freedom struggle, but it proved detrimental to a dispassionate assessment of economic history, argued economic historian Tirthankar Roy in a 2015 Economic and Political Weekly article (bit.ly/2s19RLW).

The contributions of Marxist scholars such as Paul Baran and Samir Amin bolstered this view and led many influential leaders of the developing world to view openness with suspicion. The rich world became so by exploiting poor countries such as India, the Marxist scholars argued, and the narrative of drain and deindustrialization in India acquired even greater legitimacy.

Roy argued that deindustrialization was a myth, simply because factory production and employment had taken firm roots in British India by the early 20th century and grew at a rapid pace in the first half of the 20th century.

But with rare exceptions such as Mahadev Govind Ranade, most nationalist thinkers viewed both trade and railroads with great suspicion. Donaldson’s careful work shows that whatever be its political and military imperatives, investment in railways was a boon rather than a bane for India. 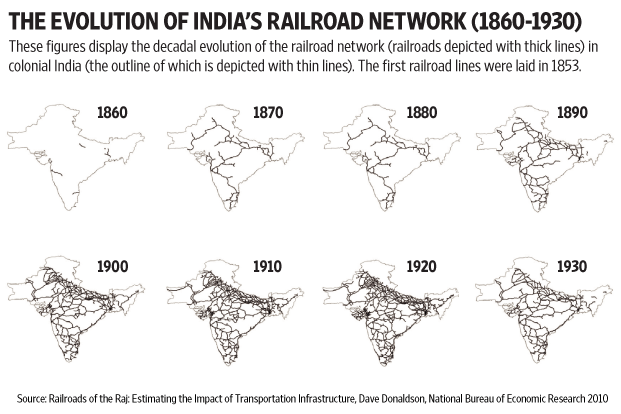 In a 1975 research paper, economist John Hurd was the first one to explain how the railways helped integrate the food market in India. Hurd utilized data for average wheat and rice prices from 1861 to 1921 and showed that the coefficient of variation in prices was lower for districts that had railways vis-à-vis those that didn’t.

Donaldson, who collected archival data from 1861 to 1930 on agricultural prices, trade data for eight types of salt and information on the spread of the rail network, confirmed Hurd’s findings that the railways helped in integrating markets, lowering price fluctuations and raising income levels. He estimates that real incomes shot up by 16% on average, a staggering figure given that total increase in income during that period was only about 22%.

In another paper co-authored with Robin Burgess of the London School of Economics, Donaldson showed that “the arrival of railroads in Indian districts dramatically constrained the ability of rainfall shocks to cause famines in colonial India". Donaldson and Burgess track districts from 1875 to 1919 and find that on an average, a district was more vulnerable to famine before the railways arrived.

Donaldson’s work warns us against relying on simple nationalistic narratives to look at the past. It also warns against relying too much on the currently fashionable discourse of economic nationalism, which portrays trade as an enemy of the people. At a time when trade and economic integration seem to be under increasing attack, Donaldson’s scholarship reminds us that despite its drawbacks, trade has played a vital role in the march of human civilization.

Economics Express looks at the world through the lens of economics.