New Delhi: Aubiquitous yet outdated distinction between two types of government spending may soon be consigned to the bin.

A high-level committee constituted by the Planning Commission has recommended that the usual distinction made in the government budget between Plan expenditure and non-Plan expenditure be done away with. And be replaced by a single category: expenditure.

Plan expenditure is spent on productive asset creation through Centrally-sponsored programmes and flagship schemes, while “non-Plan" refers to all other expenditure such as defence expenditure, subsidies, interest payments, including expenditure on establishment and maintainance activities such as salaries. Around 30% of the spending by the Union government is Plan expenditure. 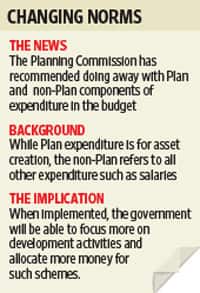 The Planning Commission, in the 11th Plan (2007-12) document prepared in 2007, had proposed abolition of this “illogical and dysfunctional" distinction. A presentation made by the committee to the Planning Commission earlier this month highlighted the advantages of merging the two expenditure classes.

The presentation, reviewed by Mint, also says that in the current system non-Plan budget is based on past commitments and requirements and residual resources allocated to Plan budget. This has resulted in reduced flexibility in allocation within the Plan budget and, therefore, there is a strong case for combining budgeting for all items.

Pronab Sen, principal adviser at the Planning Commission, said the idea of doing away with the distinction is a part of an ongoing exercise at the Planning Commission. “Traditionally Plan expenditure included all investment, including new investments. And recurring expenditure such as salaries of manforce in various government departments was what was essentially non-Plan. But with time this distinction got blurred because of which there is no meaning in continuing with the two components. A common head will allow allocation of resources according to need and will therefore be more flexible," said Sen.

Sen also said the exercise of having a common nomenclature can be easily done provided the classification in budgetary provisions be changed.

For this the committee has suggested devising an exhaustive set of accounting heads, avoiding overuse of heads such as “other items" (expenditure), indicating the cost of inputs in delivering a service to achieve certain objectives and a set of functional heads that can be identified as what today is considered to be Plan expenditure.

N.R. Bhanumurthy, professor at the National Institute of Public Finance and Policy welcomed the move. “There is a lot of confusion regarding the distinction, especially at the state level, which feeds into the Centre’s budgeting. The confusion also makes it difficult to calculate the fiscal multiplier or the impact of expenditure on overall growth and developmental aspects," he said.

For better representation of items the committee has suggested major and sub-major heads so that budgeting and accounting are based on broad objectives linked to outcomes.