An interactive dashboard of all the awardees since the institution of the awards has been launched which allows the user to explore and analyse the list of 4,400 awardees

The Padma awards (Padma Shri, Padma Bhushan and Padma Vibhushan) are finally embracing the 21st century or at least the website. An interactive dashboard of all the awardees since the institution of the awards (1954) has been launched which allows the user to explore and analyse the list of 4,400 awardees.

The data visualization, which is described as “sophisticated" by the government gives details like the year of the award and the state of provenance and the profession of the awardee. The visualization also shows how the different fields such as public affairs, art, civil service, medicine, literature and education amongst others have fared in terms of honours over the years. 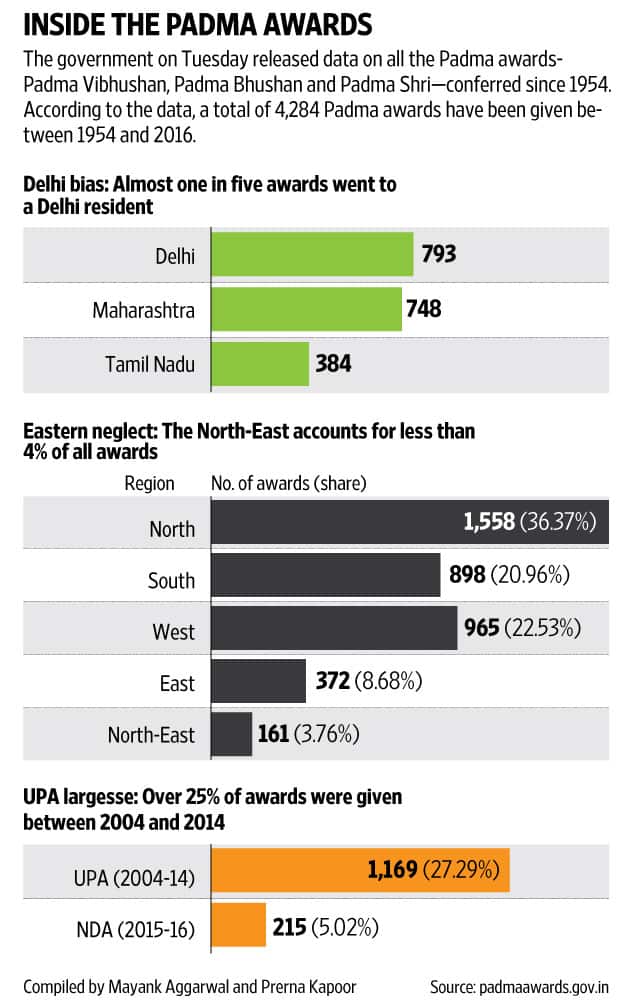 For instance a big chunk of awardees between 1970 and 1975 were from the civil service. Since 1990, art has seen a significant increase in the number of honours. Public affairs, sports and social work have had a consistent number of awardees since the inception of the awards. “This marks another major step in the government’s efforts to bring transparency and people into the Padma Award process," says a source.

This interactive dashboard comes on the heels of the government’s decision to allow only online nomination for the awards and make an Aadhaar number mandatory for the person making the nomination. Physical letters and emails will no longer be acceptable. An Electronic Management System has been set up and all the recommendations, be it from individuals or ministries will have to go through this.

The federal government has further urged states to keep in mind exceptional talent that may get overlooked due to lack of publicity. A PTI news report quoted government sources as saying, “simple online nomination encourages and facilitates all Indian citizens to participate."

The latter move is particularly welcome as the awards have been mired in controversy for quite some time now. Either they are in the news for someone getting overlooked (Saina Nehwal’s outburst in 2015 when her name was not forwarded by the sports ministry) or individuals being awarded due to their proximity to leaders (former Prime Minister Atal Bihari Vajpayee’s knee surgeon, C.S. Ranawat, a New York-based doctor, was awarded the Padma Bhushan) though the awards have also honoured India’s best and brightest.

Now it remains to be seen whether the government’s efforts to make the process more transparent and to explain the history of the awards in a comprehensive manner, bears fruit.