New Delhi: Finance minister Arun Jaitley on Wednesday indicated that the proposed goods and services tax (GST) will be much lower than the 27% figure that has been mentioned, as the government won Lok Sabha approval for a constitutional amendment bill to roll out the indirect tax reform starting next year.

In his reply to the debate on the bill which began on Tuesday, Jaitley conceded that a 27% revenue-neutral GST rate will be very high.

“The government or the GST council has not given this figure. A particular organization, in its own internal assessment, has given what is a revenue-neutral rate," Jaitley said, noting that the states and the centre have decided to keep alcohol out of GST’s ambit.

“Then neither the state finance ministers nor the central government are interested in imposing higher taxes on our own people. Therefore, this figure is going to be much more diluted. These are rates that will be decided by the GST council itself," he said.

Jaitley said he could not commit the government to a particular rate at this juncture, but mentioned the 13th Finance Commission’s recommendation of 18% as a possible rate of GST, which the bill wants to take effect on 1 April, 2016.

“The bill has been passed with amendments and therefore the impact of the same will only be known once the same is made available in the public domain," he added.

GST is expected to broaden the tax base, sharpen the competitive edge of Indian exports by removing several tax distortions and create a unified national market by removing inter-state barriers to trade. Supporters of the tax have described it as the most important tax reform contemplated in independent India.

GST will replace a multitude of central taxes like excise duty and service tax and state levies such as octroi, sales, value-added, entertainment and purchase taxes.

Once enacted, all goods and services, with the exception of alcohol, will come under GST’s ambit. The bill also proposes to include petroleum under GST, but has left the decision over when to start levying GST on oil products to the GST council, a body to be formed at a later date.

Lok Sabha approval for the Constitution (122nd Amendment) (GST) Bill, 2014, hadn’t been in doubt, given the commanding majority the ruling National Democratic Alliance (NDA) has in the lower house. The real test for the government will be in the Rajya Sabha, where the Bharatiya Janata Party-led NDA is in a minority, with just 62 members in a 245-member house.

Any constitutional amendment bill needs to be approved by a two-third majority in both Houses of Parliament and ratified by half the state legislative assemblies before it takes effect.

A senior minister said the bill is likely to be brought before the Rajya Sabha on Thursday before the budget session ends on 13 May. “The government is worried about the position taken by Congress and Left parties on the bill," he added on condition of anonymity.

The Congress walked out of the lower House after the government turned down its demand to send the bill to a standing committee. In the Rajya Sabha, the Congress is likely to insist that the bill be sent to a select committee.

“Any reference to select committee as some political parties want would only defer the passage to the monsoon session, which can delay the April 2016 implementation," said Harishanker Subramaniam, national leader, indirect tax services, at consulting firm EY India.

The centre has included a provision in the bill that assures states compensation for five years for losses arising from GST implementation. States will be compensated for 100% of their losses in the first three years, 75% in the fourth year and 50% in the fifth year. 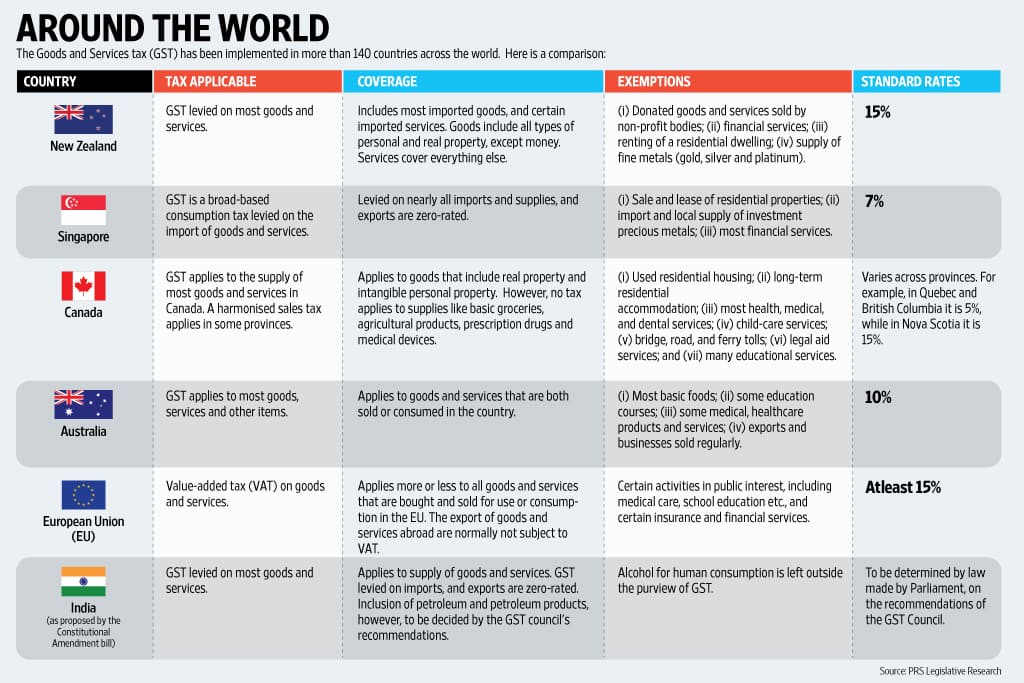 N. Bhaskara Rao, New Delhi based political analyst and founder-chairman of the Centre for Media Studies, said the government must make efforts to hold talks with opposition parties to get passage for the bill in the Rajya Sabha because the budget session is at its fag end.

“It will be very difficult for the government to push through the bill in Rajya Sabha because the NDA lacks the required numbers. The government has also not made an attempt to hold discussions or to appease the opposition. Instead, the ruling BJP has been accusing the opposition parties of blocking bills and not cooperating with the government," he said.

“It is wholly erroneous to talk about GST as a UPA versus NDA issue. It is an issue between the centre and the states," Jaitley added.

While the 2011 bill brought in by the UPA suggested a dispute settlement mechanism headed by a Supreme Court judge, the version introduced by the NDA government accepts the recommendation of the standing committee, which sought to set up a GST council to resolve any disputes.

Jaitley insisted that the only new clause he had introduced beyond the recommendations of the standing committee was a proposal for a 1% tax in addition to the integrated GST, or IGST that states like Maharashtra, Tamil Nadu and Gujarat can impose for two years to offset any loss in revenue.

IGST, or the sum of central GST and state GST, will be levied on inter-state movement of goods and will be collected by the centre and later distributed to states.