New Delhi: Agriculture minister Sharad Pawar has requested Prime Minister Manmohan Singh to allow him to step down as the head of a ministerial panel that was set up to decide on the reserve price of telecom spectrum to be auctioned, a week after Pawar was appointed to the post, fearing that his name will be dragged into the 2G scam.

Pawar was made the head of the empowered group of ministers (eGoM) last week after former finance minister Pranab Mukherjee resigned to file his nomination papers for the presidential election.

The decision to quit the post came hours after Monday’s scheduled eGoM meeting was deferred.

“The meeting has been postponed because I have got some other work," Pawar told reporters on Monday morning. Later in the evening, Pawar said he did not want his name to be dragged into the 2G scam and, therefore, had written to the Prime Minister seeking to be recused.

This is the second time that the crucial meeting has been deferred. An earlier one, scheduled on 21 June, was postponed because of Mukherjee’s reluctance to take any controversial decision prior to his resignation. 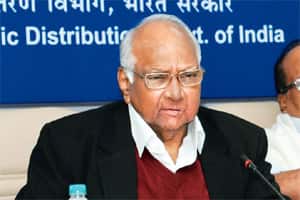 In a 2 February judgement, the Supreme Court cancelled 122 telecom licences and spectrum allocated to nine companies, and ordered DoT to hold an auction for the available 2G spectrum (in 1,800MHz band) by 2 June.

This deadline was extended to the end of August.

The Telecom Regulatory Authority of India (Trai) had suggested that the base price for the spectrum to be auctioned be set at ₹ 3,622 crore per MHz of spectrum. At that price, a company will have to pay ₹ 18,000 crore to start services across India with 5MHz spectrum. The industry has criticized the regulator’s recommendation saying it would as much as double mobile phone tariffs.

The eGoM is expected to also decide on other issues, including spectrum usage charges, roll-out obligations, and the ability of telcos to mortgage spectrum.

The Union cabinet is expected to meet on Tuesday to discuss and decide on spectrum policy decisions, including the crucial payment of one-time fee by the incumbent operators for spectrum they have above the contracted 6.2MHz.

DoT had, last month, circulated a draft of the spectrum policy for all the relevant ministries for comments and suggestions, before forwarding the policy to the cabinet for approval.