New Delhi: Top politicians such as Suresh Kalmadi and V.K. Malhotra may soon have to step down as presidents of national sporting associations, with the government restoring a regulation that limits the number of years for which a person can head these bodies. 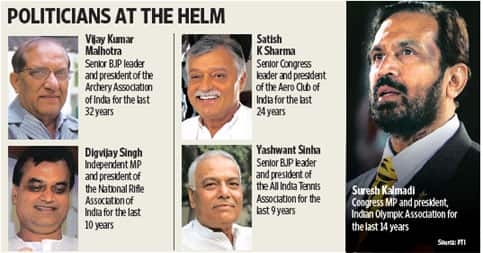 The Union sports ministry has reintroduced a 1975 regulation, which was put in abeyance in 2001 by the Bharatiya Janata Party (BJP)-led coalition that was then in power. The regulation caps the tenure of the heads of sporting bodies at 12 years “with or without (a) break".

The regulation also limits the tenures of secretaries and treasurers to not more than two successive terms of four years each. “Further, there will be a retirement age of 70 years for all members and office bearers," the sports ministry said.

People occupying the top posts in various NSFs for more than a decade will have to step down after their current term expires, the ministry said. This could include Kalmadi, a Congress member of Parliament and president of the IOA since 1996, and the BJP’s Malhotra, president of the Archery Association of India for more than three decades.

Akali Dal leader Sukhdev Singh Dhindsa’s reign as the chief of the Cycling Federation of India is into its 14th year, while V.K. Verma, a bureaucrat, has been heading the Badminton Association of India for 12 years.

Congress party politician Satish K. Sharma has been the head of the Aero Club for 24 years, while B.S. Adityan, a businessman, has been at the helm of the Volleyball Federation of India for 12 years.

“I have asked the Indian Olympic Association to immediately convene a meeting to look into the matter and to come out with a befitting response. The matter is already in the court and if needed, we will also approach the Supreme Court in the matter," said Malhotra.

“This is an unnecessary controversy sought to be created by the sports ministry when the nation is preparing to host the Commonwealth Games," he said.

Lalit Bhanot, general secretary of the Athletics Federation of India and secretary general of the Commonwealth Games Organizing Committee that’s preparing for the Games to be staged in New Delhi in October, ruled out any immediate impact on Kalmadi. “(The) next election to IOA president is only due in 2012," he said.