The science behind the breast cancer gene

New Delhi: Hollywood actor Angelina Jolie’s decision to remove her ovaries and fallopian tubes to reduce the risk of developing ovarian cancer has rekindled the discussion on medical options available to women who test positive for the breast cancer gene.

This was Jolie’s second preventive surgery. In May 2013, she had opted for a preventive double mastectomy (removal of both breasts) after testing positive for a mutated BRCA1 (breast cancer) gene.

The BRCA1, essentially a tumour suppressor gene—also called a breast cancer type 1 susceptibility protein—is responsible for repairing DNA. A BRCA mutation means a change in either of the two genes—BRCA1 or BRCA2 (Breast Cancer 1 and 2 genes)—that prevents that gene from working properly. When the gene is damaged by mutation, it can increase the risk of cancer. According to Jolie’s doctors, she had an 87% risk of breast cancer and a 50% risk of ovarian cancer.

Both men and women carry two copies of the BRCA1 and BRCA2 genes. Mutations in these genes increase the risk of developing breast cancer. In some families, like Jolie’s, the mutation increases the chance of developing breast cancer, ovarian cancer and some other types of cancer. The BRCA mutation can be passed on from the mother or father. BRCA mutations are inherited in a dominant fashion, which means one copy of an altered BRCA1 or BRCA2 gene in each cell is sufficient to increase the chance of developing certain cancers. (See graphic.)

“While no specific association between BRCA1 or BRCA2 mutations with cancer type was seen, mutations were more often seen in families with ovarian cancer," the paper states.

Having said that, only about 5-10% of women with breast cancer are BRCA positive; therefore, not everyone needs to be tested for BRCA, said Ramesh Sarin, surgical oncologist at Indraprastha Apollo Hospitals.

“Patients are, without a doubt, more aware now of this genetic abnormality which can cause breast cancer. But patients still don’t understand the implications. One good thing is that doctors and other specialists are aware, so people have started talking about this, which is always a good thing," said Sarin. 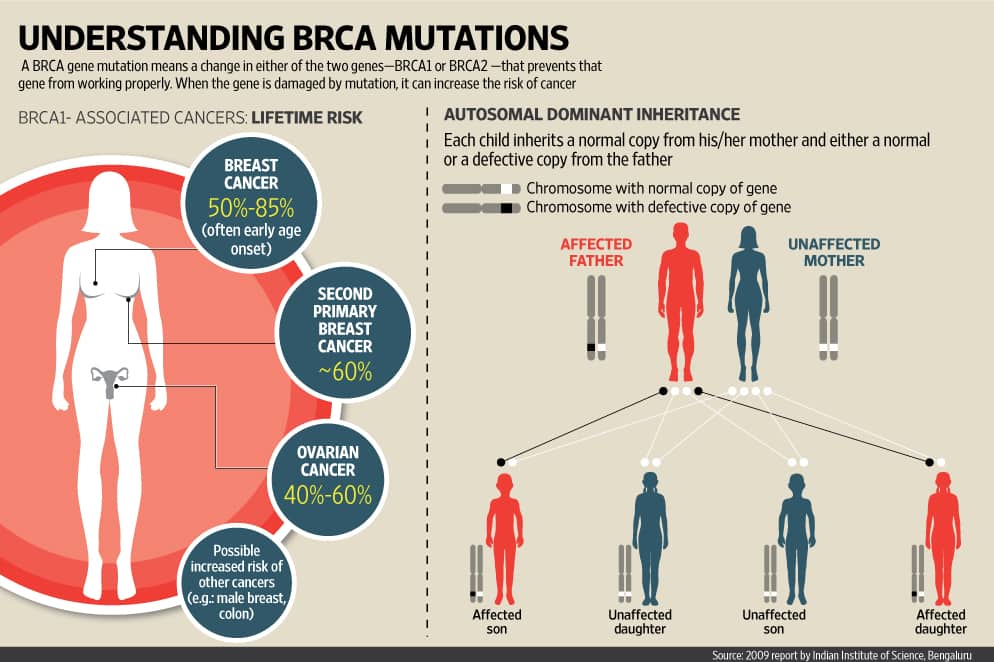 These genetic tests cost ₹ 25,000-30,000 in India. Usually, most hospitals have a genetic counsellor, who draws a family tree and traces the progression of cancer. Jolie has said that she had already lost eight members of her family to different kinds of cancers.

At Apollo’s screening clinic, nearly 50 patients were asked to get this test done last week, but only six did so and three tested positive. “This is a very big number for us," said Sarin.

For patients with a family history of breast or ovarian cancer, there are several options, say oncologists. Removal of breasts and ovaries—as Angelina Jolie underwent—is one of them but it is also an extreme measure.

“One must remember these are perfectly healthy patients. Genetic tests can only give a ‘risk-score’ for patients with mutations in genes. It does not conclusively say that the patient will definitely develop breast cancer. So the mutilation can be avoided if patients opt for chemo-prevention or keep a close watch by using technology like magnetic resonance imaging (MRI) etc. It is important to remember that not everyone who inherits mutations in these genes will develop cancer," added Sarin.

In most cases, when a patient tests positive, their children are also tested for the gene. In younger women, doctors usually advise an early marriage and early childbirth, followed by removal of ovaries.

In the US, BRCA1 and the related BRCA2 are responsible for about 5% of breast cancer cases, or up to 25% of inherited breast cancers.

“This depends on the patient’s priorities. In the Indian context, if they are young—in their mid-20s—and want to be mothers, we advise them to not opt for extreme options like removal of breasts and ovaries. There is a lack of data on Indian patients. In developed countries, the situation is different, but it is a controversial decision. Patients should not resort to such extreme procedures because there is added psychological scarring," said Manoj Sharma, oncologist at Maulana Azad Medical College in Delhi.

Drugs such as Tamoxifen can be prescribed, in addition to close surveillance, if the women are younger. The drug can bring down chances of developing breast cancer by nearly 50%, said Sarin.