Designed by the Singapore govt, Amaravathi city will span 217 sq. km between Vijayawada and Guntur towns

Hyderabad: Andhra Pradesh on Monday released the master plan for Amaravathi, the proposed state capital that is being built from scratch.

As per the master plan designed by the Singapore government, the capital city spans an area of 217 sq. km. between Vijayawada and Guntur towns, and leverages resources of the Krishna river that flows in the region.

Construction of a new capital was necessitated by last year’s bifurcation of Andhra Pradesh to create a separate state of Telangana, which will take exclusive possession of Hyderabad in 2024. Till then, Hyderabad will serve as the joint capital of Telangana and residuary Andhra Pradesh.

The newest capital in the country incorporates the concepts of Vastu and Feng Shui, the Indian and Chinese sciences of construction, touches three national highways, and will be fed by seven growth corridors including those from Hyderabad to Machlipatnam Port and from Chennai to Visakhapatnam.

“This is a good beginning," Andhra Pradesh chief minister N. Chandrababu Naidu said at a media briefing on Monday. “A country is coming together to help with our capital." 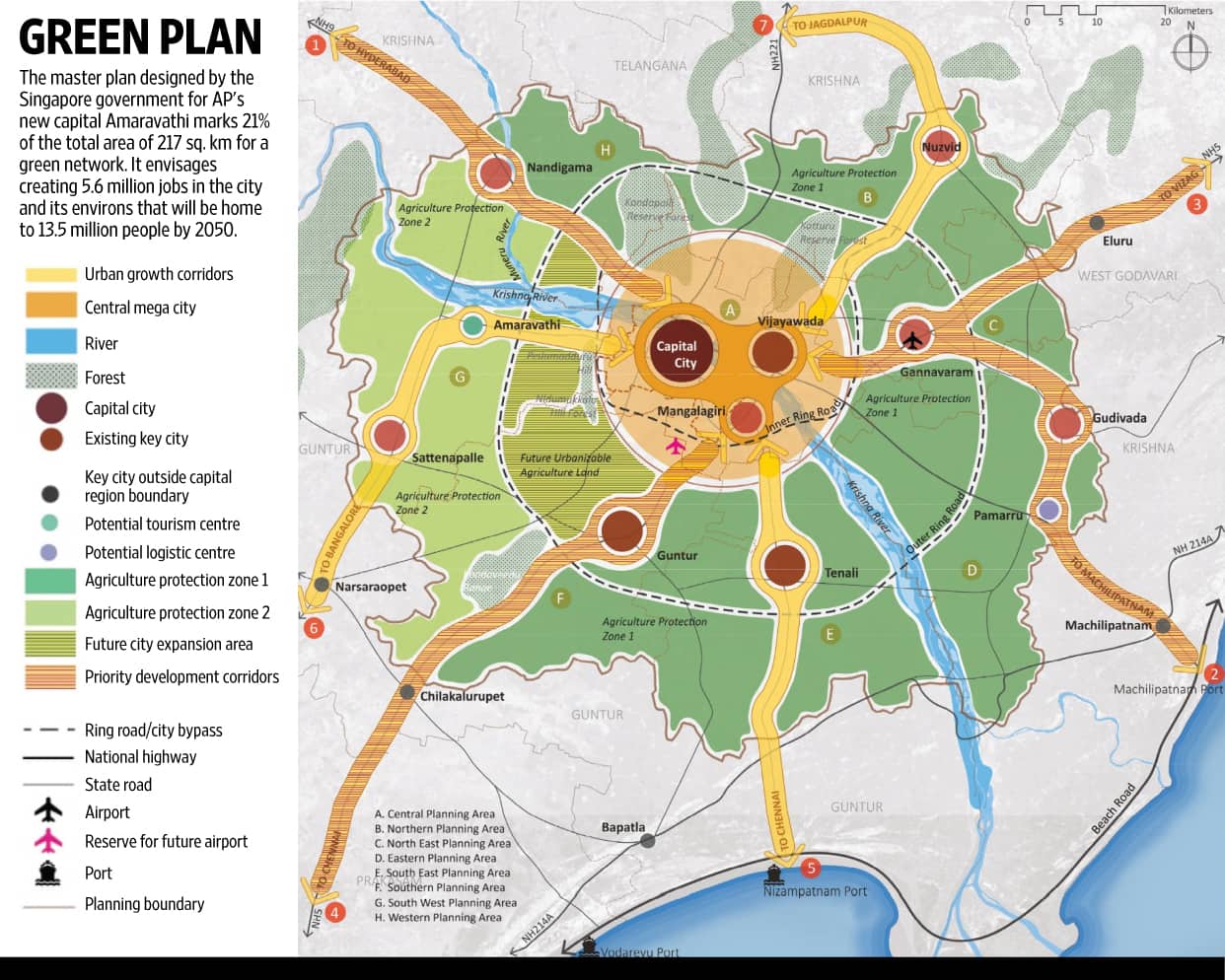 The plan envisages creating 5.6 million jobs in the capital and its environs that will be home to 13.5 million people by 2050.

“The master plan will guide the development of Amaravathi up to 2050," said S. Iswaran, a minister in Singapore Prime Minister’s office and second minister for trade and industry.

A Singapore government delegation led by Iswaran handed over the document to the Andhra Pradesh government on Monday, marking the completion of the second milestone of a three-stage plan.

The Infrastructure Corporation of Andhra Pradesh had inked a memorandum of understanding (MoU) with International Enterprise Singapore to develop the master plan for Andhra Pradesh’s capital in three stages.

The master plan for the bigger capital region, spread across 7,420 sq. km was handed over to the state government on 30 March. The final phase of the master plan for the seed capital region, covering an area of 8 sq. km where the secretariat, government offices, residences of the chief minister and governor, among others will be located, will be handed over on 15 June, chief minister Naidu said.

The capital city master plan banks heavily on the Krishna river to develop a water network of over 80km, covering 3% of the total area. Canal parks, an amphitheatre, island resorts, an island-themed park, and a waterfront promenade spanning 35km along river Krishna have been proposed, according to a presentation made by the Singapore government.

Notably, the master plan marks 21% of the total area for a green network. It also promotes the use of public transport.

A bus rapid transit system, which can eventually be upgraded to mass rapid transit network with four lines spanning 135km, is proposed. A transport hub will be located in the capital’s north-east. Walkways, local waterways and cycle tracks run along the riverfront. Expressways and semi-expressways spanning 127km will run across the capital city out of the total road network of 938km.

“By and large the plan is very good. They have integrated whatever concepts we had in mind," said Naidu.

Andhra Pradesh has time till 2024 to build its capital. Till then, the state government can work out of Hyderabad, the joint capital for Andhra Pradesh and Telangana.

“Even if we can stay in Hyderabad for 10 years, we want to build the capital at the earliest," Naidu said. But he admitted that building a capital will not happen overnight, and it takes time to finalize everything, prepare finer details of the buildings that will come up in the new capital, issue contracts, build a capital and an economy around it.

To sidestep provisions of the Land Acquisition Bill that makes acquisition of land a costly and difficult affair, the state government opted to acquire land through land pooling from farmers of the fertile region in one of the biggest such exercises undertaken in the country. Land owners who part with their land under the pooling exercise will receive plots of commercial and residential land in the developed capital.

The government pooled 33,000 acres from farmers under a scheme it announced last year. Of this 17,000 acres have been handed over, Naidu said.