New Delhi: Business and investor sentiment in and about India took another hit on Wednesday with the World Bank revising its growth projections for the Indian economy in 2011-12 and 2012-13 to 6.8% each, from 8.2% and 8.5% respectively. 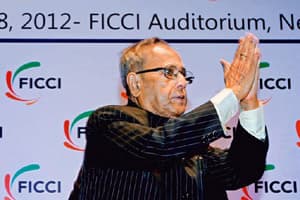 In its Global Economic Prospects released Wednesday, the World Bank also said it expects the global economy to expand 2.5% and 3.1% in 2012 and 2013 as against the 3.6% projected earlier for both years.

Finance minister Pranab Mukherjee said on Wednesday that the current state of heightened global uncertainty has implications for emerging market economies including India. “We have a difficult last quarter ahead of us in this fiscal year. Our growth for 2011-12 may be around 7.5% or less," he said at the annual general meeting of industry lobby Federation of Indian Chambers of Commerce and Industry.

“As far as contingencies are concerned, the RBI (Reserve Bank of India) is holding on to its forex reserves to deal with the possibility of a sharper rupee depreciation and large companies are keeping cash reserves for difficult times," he said. Joshi, who has forecast 7% GDP growth, said he will not revise his projection any further for the current year.

With the deepening debt crisis in Europe, the World Bank said the region appears to have entered a recessionary phase. “Some of the financial turmoil in Europe has spread to developing and other high-income countries, which until earlier had been unaffected. This contagion has pushed up borrowing costs in many parts of the world, and pushed down stock markets, while capital flows to developing countries have fallen sharply, growth in several major developing countries is significantly slower than it was earlier in the recovery, mainly reflecting policy tightening initiated in late 2010 and early 2011 in order to combat rising inflationary pressures."

The World Bank said the slowdown in India’s growth which constitutes 80% of South Asia’s GDP, reflects moderation in domestic demand, given a deceleration in investment growth that has faced headwinds of rising borrowing costs, high input prices, slowing global growth and heightened uncertainty. “Household spending has been curbed by persistently rising prices cutting into real incomes and higher borrowing costs," it said. RBI has raised interest rate 13 times since March 2010 to curb inflationary pressure in the economy.

“South Asian governments have limited space with which to introduce fiscal stimulus measures, due to large fiscal deficits, and the possibility of monetary easing is constrained by sustained high inflationary pressures," the World Bank said. Private economists expect government’s fiscal deficit to cross 5.5% of GDP, much higher than the budgeted 4.6% of GDP. The World Bank said the South Asian region’s export growth is projected to nearly halve to 11.6% in 2012 from 21% in 2011, due to stagnant GDP in the European Union and the projected global slowdown, including the influence of tighter monetary policy in China and fiscal consolidation in Europe.

It said financial sector impact through heightened global risk aversion because of reversal of capital inflows, higher international borrowing costs and slowing FDI is likely to be felt strongest in India, which is the most integrated with global financial markets, and whose external financing needs (current account financing and external debt repayments) will reach 9.8% of GDP in 2012.

The World Bank said problems are likely to be particularly acute for developing countries with external financing needs that exceed 5% of GDP. “Where possible, they should pre-finance to avoid abrupt cuts in government and private sector spending. If global financial markets freeze up, governments and firms may be unable to finance growing deficits. Countries should engage in contingency planning, prioritizing social safety nets and infrastructure spending to assure longer-term growth," it added.

Given the lack of fiscal space in South Asia, inflationary pressures and consequent limited room for monetary policy easing, it advised fiscal consolidation through expenditure rationalization in India to protect critical social programs.

With markets in the US and Europe expected to experience prolonged weakness, South Asian countries have the opportunity to re-think and pursue new sources of growth in both domestic and external markets. “This may include focusing on export growth toward faster growing emerging markets, as well as internal market enhancements through structural and governance reforms. Such actions would help boost export demand, help raise investment, provide better jobs and generate an environment for more inclusive growth," it said.

The World Bank said the downturn in Europe and the slow growth in developing countries could reinforce one another more than is anticipated in the baseline scenario, further complicating efforts to restore market confidence.

“While the situation in high-income Europe is contained for the moment, if the crisis expands and markets deny financing to several additional European economies, out-turns could be much worse, with global GDP more than 4% lower than in the baseline," it said.