New Delhi: In its first formal policy statement, the Railway Budget, the Bharatiya Janata Party (BJP)-led National Democratic Alliance (NDA) promised a turnaround for the ailing national transporter, premised on unprecedented infusion of private investment, both foreign and domestic, and funded in part by innovative means like monetizing some of its vast land assets.

Later, prime minister Narendra Modi, in a short address telecast on Doordarshan after the presentation of the rail budget, promised to restore the primacy of the Indian Railways and make it central to future development. In this, he added, the rail budget was the first step.

The vision statement, however, failed to list specific deliverables or finite timelines, triggering disappointment in the stock markets that held great expectations from the rail budget. The Sensex fell nearly 2%, or 518 points, to 25,582.11.

By effecting the rail fare increase last month and thereby delinking it from the budget, the NDA had already sanitized itself from sharp political rebuke. While the Congress was muted in its response, presumably because the NDA pushed ahead with several of its own initiatives, announced in its 10 years in power, the main critics of the rail budget were the Trinamool Congress and the Left parties.

“The change in mindset that we are open to different models has happened a long time ago. Most people are now taking a more sensible view of watching out for the execution of proposals to bring PPP (public private partnership) or FDI (foreign direct investment, which the NDA said it would allow in all aspects of the railways, except operations). These proposals are promissory notes, people now want to wait and see how these promises materialize, how much PPP or FDI actually comes. So the debate on these will happen two years from now," Pratap Bhanu Mehta, president and chief executive, Centre for Policy Research, the New Delhi-based think tank, said,

Earlier, presenting his first rail budget, Union railway minister Sadananda Gowda set the tone by making it clear that the transporter was strapped for finances and couldn’t avoid tough decisions. In a 62-minute speech, the minister listed out the blueprint for action, which listed initial steps to usher in greater efficiency, improve services to passengers and also reduce the dependence on debt funding.

“(The railways) is expected to earn like a commercial enterprise but serve like a welfare organization. These two objectives are like two rails of the railway track, which though travel together but never meet. So far, Indian Railways have managed to do tight-rope walking by balancing these twin conflicting objectives," he said.

According to Gowda, the commitment of the railways towards its social obligations was precluding investments in long overdue development projects. At present, on every rupee of gross traffic earnings of the railways, 94 paisa went towards expenses and only six paisa was left over for funding development.

Gowda’s budget wasn’t bereft of populist measures, but had far fewer than the budgets announced by any rail minister in recent history.

The number of new trains announced is the lowest in several years.

The railways, Gowda said, needs ₹ 50,000 crore a year for the next 10 years to just fund ongoing projects. Stretched for resources, it has been unable to deliver on previously announced projects. Gowda proposes to stagger investments and focus on prioritizing existing projects to enable early closure.

Given railways’ low efficiency and falling internal generation of revenue, the minister said his ministry would look to tap new sources of funds.

Gowda told Parliament that the ministry would seek cabinet approval for FDI in the rail sector except for operations. He said the government would encourage private sector investments to bridge the railways’ funding gap in areas such as infrastructure projects and station development. “Bulk of our future projects will be financed through the PPP mode, including the high-speed rail which requires huge investments," Gowda said.

The railways has set a target of sourcing ₹ 8,000 crore from PPPs this year, said Arunendra Kumar, chairman, Railway Board. The railways, however, failed to achieve last year’s target of ₹ 6,000 crore through this route and could generate only ₹ 2,500 crore. 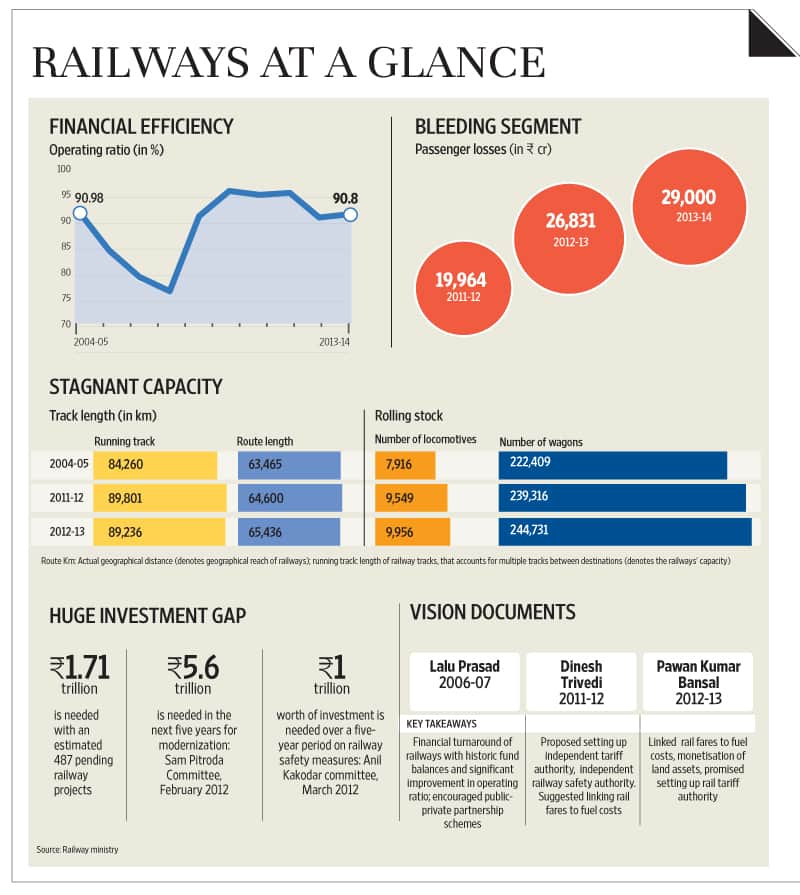 The government also proposes to tap investable surplus funds of state-owned companies that fall under the overarching ambit of Indian Railways. It will also monetize land owned by railways.

He made clear his government’s intent to continue with the six-monthly fare revision policy that was initiated by the earlier government. “Periodic revision in passenger fare and freight rates will be linked to revisions in fuel prices in order to insulate revenues from fuel cost escalation," Gowda said.

And he suggested that there could be a more stringent review of unviable stops, especially on express routes.

The passenger segment continues to bleed. “Passenger losses on account of cross subsidisation is at ₹ 29,000 crore for the fiscal ended March," said Rashmi Kapoor, financial commissioner, Railway Board.

However, the lack of specific milestones seemed to have unnerved the stock markets as well as the analysts.

Arvind Mahajan, partner and head of infrastructure and government services, KPMG in India, said, “While there was discussion on PPP and FDI in IR (Indian Railways), the budget speech lacked details and the announcements in the coming weeks will be important to understand the specifics. Having said that, it is the step in right direction and it will be to the benefit of nation at large that these steps are implemented sooner. What we missed was any discussion on Railway Tariff Authority as it is critical for attractive private investment in Indian Railways. Overall, the railway minister did touch upon key aspects and has shown the intent to turnaround IR into a commercially viable and customer-friendly organization but the specifics of few announcements are awaited".

Gowda set a target of ₹ 1.64 trillion in total receipts and an expenditure of ₹ 1.49 trillion. The railway minister estimates the railway to achieve an operating ratio of 92.5% in the current fiscal even as he revised last year’s operating ratio to 93.5%—2.7% higher than the 90.8% reported in the interim budget.

“In 2013-14, there was a decline in traffic growth as compared to revised projections. Expenditure, however, shot up and was more than what was estimated," he said.

The freight loading target was pegged at 1101 million tonnes (mt), 51mt higher than that achieved in the last year. Passenger traffic is expected to grow by 2%.

For all the live tweets on Rail Budget 2014, go to https://storify.com/livemint/railway-budget-2014