UP assembly passes resolution to break up state into four parts

UP assembly passes resolution to break up state into four parts

New Delhi: The Uttar Pradesh assembly on Monday passed a resolution seeking to break up the country’s most populous state into four parts, before being adjourned sine die amid protests by opposition parties.

Analysts said the resolution to create the states of Purvanchal, Bundelkhand, Awadh Pradesh and Paschim Pradesh, passed by a voice vote, could weaken the opposition and boost the prospects of the ruling Bahujan Samaj Party (BSP) in next year’s assembly elections.

The main opposition Samajwadi Party (SP) moved a no-confidence motion against the government as the assembly gathered for the winter session, but the matter was not taken up.

“The BSP government was already taking initiative for the reorganization of the state and the decision to bring a resolution in the assembly was taken under compulsion as the Centre was not taking any decision in this regard," chief minister Mayawati said after the House was adjourned. 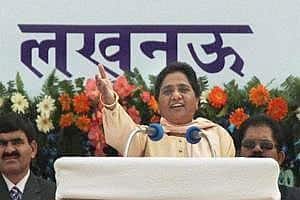 Mayawati also rejected criticism that the resolution was a political gimmick ahead of elections, saying development is possible only if Uttar Pradesh is divided into smaller states.

The assembly resolution creates a dilemma for the Congress party, which is hoping to form its first government in Uttar Pradesh in two decades after next year’s assembly polls. The Congress-led United Progressive Alliance (UPA) government at the Centre is already faced with a vociferous demand to carve the state of Telangana out of Andhra Pradesh.

Opposing the demand for dividing Uttar Pradesh could cost the party votes in the state assembly polls. Supporting the demand could take the edge out of its opposition to the Mayawati government, while raising the hackles of those who want a Telangana state. Lawmakers from Telangana, including those belonging to the Congress, are expected to disrupt Parliament when the winter session opens on Tuesday.

“The move comes right before assembly elections," Congress spokesperson Manish Tewari said. “If somebody thinks that people of Uttar Pradesh are fools and cannot see the political opportunism behind it, then the public will reply to it."

Sudhir Kumar, a political analyst based in Uttar Pradesh, said Mayawati gained two advantages from the resolution on state reorganization, apart from winning the support of all those who back smaller states.

“It was a strategy to focus the forthcoming elections at BSP versus SP. She has also shifted the highlights from the real issues of corruption and inflation to an emotional issue. It was a master stroke," Kumar said.

BJP leader Mukhtar Abbas Naqvi said it was a “a cover-up of the sins of the misrule of Bahujan Samaj Party in Uttar Pradesh for the past four-and-a-half years".

The SP and the BJP had earlier announced plans to move a no-trust vote against the government. The BSP had come to power in 2007 with 207 seats in the 403-member assembly, but has become vulnerable lately as Mayawati has suspended a number of party leaders, including legislators—depleting its strength in the House. Besides, BSP legislators who have been denied tickets for next year’s polls may also vote against the government in a no-confidence motion.

Mayawati, however, said on Monday her government still enjoys the majority in the assembly. “I strongly reject the allegations which are part of a big political conspiracy to weaken the government."

Proceedings in the legislative council were also adjourned amid pandemonium created by opposition members demanding the presence of former cabinet minister Babu Singh Kushwaha. The BSP member of legislative council has sparked controversy by writing a letter to the chief minister claiming that some party colleagues and bureaucrats pose a threat to his life.