Mumbai: Somali pirates are increasingly turning their attention eastwards from the Gulf of Aden, prompting Indian shipowners to approach the government for more security in the Arabian Sea.

In late April, attacks were reported around 565km off Lakshadweep in the Arabian Sea.

The pirates, who run a lucrative kidnap-for-ransom syndicate, are estimated to have collected around $60 million (around Rs270 crore today) in 2009, and as of 20 April have 16 vessels and 334 hostages in their custody. 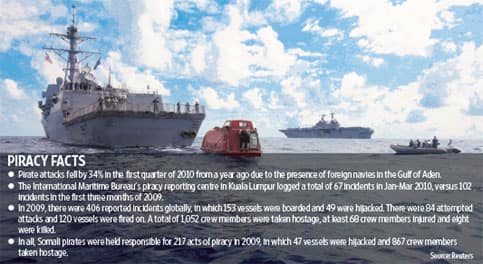 “The intensity of the attacks can be seen from the fact that almost 27 pirate attacks or attempts have been reported in the Indian Ocean in the main shipping transit lanes used by the merchant vessels from Gulf of Aden or Persian Gulf to west and east coast of India and Far East," the Indian National Shipowners’ Association (Insa), an industry lobby, wrote to regulator Directorate General of Shipping (DGS).

Citing shipowners’ concern over the situation, the letter, which Mint has reviewed, asks the government “to take necessary action for protection of their vessels and personnel in the areas infested by the pirates in the Indian Ocean, especially in the vicinity of Indian coast and Lakshadweep Islands".

Shipowners have also asked DGS to coordinate with the ministry of defence for providing a secure corridor for vessels to call at ports on the east coast of Africa such as Mombasa and Dar es Salaam.

Compounding the matter is the fact that most Indian ships typically don’t take out kidnap and ransom insurance unless they are passing through the now notorious Gulf of Aden. Insurance coverage also does not cover the ransom amount and related losses if the attacks take place outside the insurance coverage area, said an executive with a private Indian shipping firm. He declined to be named as such contracts are confidential.

“The premium of kidnap and ransom insurance cover is huge and ranges around $15,000-20,000 per one-side voyage. Therefore, Indian shipping companies are not opting for the cover, excluding Gulf of Aden," an executive at a state-owned shipping company said, on condition of anonymity.

The eastward movement of the pirates is also attributable, in part, to the fact that shipping convoys and lanes in the Gulf of Aden now move under naval protection, as well as a large naval presence in the area, this executive pointed out.

According to a UK-based consultant who advises shipping firms and insurance underwriters on Somali piracy, the pirates are extending their attacks to India’s west coast because merchant ships there are less protected and prepared.

“Shipowners should also take necessary measures to equip themselves for protection from the possible attacks, one should not expect that the government will do everything," he said, but did not want to be identified as his firm does not allow him to be quoted in the media.

A total of 406 incidents of piracy and armed robbery have been reported in the 2009 annual piracy report issued by the ICC (International Chamber of Commerce) International Maritime Bureau’s Piracy Reporting Centre. The last time piracy figures crossed 400 incidents was in 2003, the January report said.

Meanwhile, the International Maritime Organization is also seeking support from member countries to provide warships and maritime patrol aircraft for the Gulf of Aden and the western Indian Ocean area, and is working on bringing the new Maritime Rescue Coordination Centres in Mombasa and Dar es Salaam into the counter-piracy role.