I’m 12 minutes late for my interview with Chirodeep Chaudhuri.

He waits, propped against the railing outside the Chhatrapati Shivaji Maharaj Vastu Sangrahalaya (formerly Prince of Wales Museum) in Mumbai’s bustling art district, Kala Ghoda. Chaudhuri has just finished mounting his photo exhibition at the Curators’ Gallery of the museum. He is visibly exhausted—shirtsleeves rolled up, dragging hard on his cigarette. But he betrays no mark of irritation. 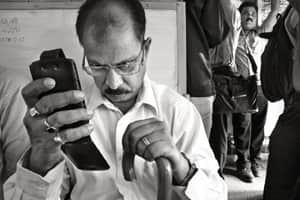 In his supporting essay for the photo series, journalist and writer Jerry Pinto likens the life of the Mumbai commuter to one of those elegantly crafted versions of hell that come to us from Hellenic antiquity. Chaudhuri gives us these faces from hell.

For two years every day, Chaudhuri made portraits of men who, like him, were going to work in the 10.03am local train from Thane to Chhatrapati Shivaji Terminus (CST), or returning home in the evening, in the first-class compartment. He would photograph the man who happened to be sitting opposite him that day.

“To me, and most of the residents of my city, commuting represents a daily reality, a close encounter with monotony," says Chaudhuri, who travels to CST almost every day to print his pictures at Angel photo studio, a city institution he has been visiting since 2000.

In his attempt to put a face to the Mumbai commuter, Chaudhuri has shot 782 photographs since he started. Fifty-six of these are part of the exhibition that opens on Monday. It shares its date with the first train ride between Thane and CST (then Victoria Terminus or VT) on 16 April 1853—a happy coincidence pointed out by Chaudhuri’s friend, historian Deepak Rao.

Chaudhuri, 38, has worked as a photojournalist and photo editor since the early 1990s, with the Sunday Observer, the Outlook group and most recently, with Time Out Mumbai, where he is presently the photo editor and head of design. A self-taught photographer, Chaudhuri says he was initiated into photojournalism while browsing through back issues of LIFE magazine while in college.

“They carried striking city scenes recording the fall of communism in Eastern Europe. Before that, I didn’t think it was possible to capture the aesthetic of something so evidently mundane."

Chaudhuri’s photographs are largely divided into “above the pocket" and “below the pocket" frames, with some that capture his subjects up to their knees. On occasions, he zooms out to reveal the commuter’s paraphernalia or immediate surroundings—like the graffiti of lovers’ names or “massage boy" phone numbers on the chipped pastel green tin train walls. Despite these self-imposed formal restrictions, Chaudhuri emerges with several visual narratives.

There’s a series, for instance, of men engrossed with their cellphones (sometimes two); of men twiddling their headphone wires; of men wiping their spectacle glasses clean. Then there are men wearing T-shirts with profound statements: “I’m part of the problem."

With the exhibition mounted, Chaudhuri is still photographing commuters. “I’ll stop at 1,000, I think," he says. He has also self-published a photo book with 98 of these images and Pinto’s essay. While he had encountered no resistance from his subjects so far—the monotony of the hour-long train ride is possibly not conducive to inquiries or objections—on Thursday, just four days before his exhibition opening, he photographed the first man who didn’t want his face to show.

The Commuters exhibition will have an assortment of large (4x3ft) portraits as well as composites of as many as 28 smaller images pieced together. Chaudhuri’s original plan was to exhibit his photographs at CST so some of his subjects could see them. “I might have had a few a-ha moments too," he says. Security and permissions didn’t materialize in time, although there might be an exhibition at the train station at a future date.

For now, the city’s main museum is a fitting spot. And it is around a 12-minute walk from CST.

The Commuters will be open to the public from 17-29 April. Prints in editions of five in size 15x12 inches will be priced at ₹ 30,000 and can be ordered directly from the artist (http://www.chirodeep.com/)