While higher prices of cereals, rice, fruits and pulses led to increase in food inflation, non-food inflation was driven mainly by fibres and oil seeds

New Delhi: India’s wholesale price inflation accelerated to 3.55% in July, the fastest in 23 months, from 1.62% in June, led by rising prices of both food and non-food articles.

While higher prices of cereals, rice, fruits and pulses pushed up food inflation, non-food inflation was driven mainly by fibres and oil seeds.

Fuel inflation rose to a 21-month high of -1% due to partial pass-through of the decline in global crude oil prices and an upward adjustment in coal prices, following an increase effected by Coal India Ltd.

Higher coal prices could gradually spill over to power prices, which could potentially get further accentuated if demand for higher coal royalty by some states is met. 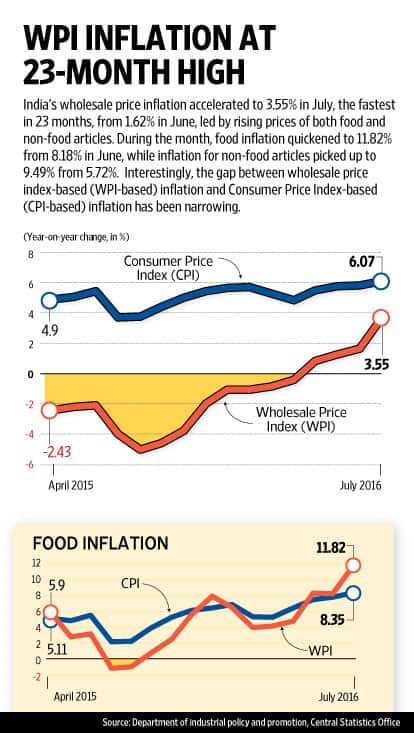 Inflation in manufactured goods accelerated marginally to a 20-month high of 1.82% in July from 1.17% a month ago due to the lagged impact of an increase in global commodity prices amid continued firming up of sugar prices.

Boosted by ample rains, planting of rain-fed kharif crops has been completed in 95.4 million hectares, 7% more than the area usually planted by this time of the year, according to data released by the agriculture ministry on Friday.

Seasonal disinflation in food prices, supported by an expected robust increase in kharif supply, is likely to alleviate the sequential momentum of inflation, although the headline figure now is unlikely to be lower due to an adverse base effect, said Shubhada Rao, chief economist at Yes Bank Ltd

Data from the India Meteorological Department showed the rainfall recorded till Friday in the ongoing June-to-September southwest monsoon season is in excess of normal by 3%.

About 93% of the country has received normal-to-excess rainfall so far.

RBI, in its monetary policy statement, said the strong improvement in sowing on the back of the monsoon’s steady progress, along with supply management measures, augur well for food price inflation to ease. “The prospects for inflation excluding food and fuel are more uncertain; if the current softness in crude (oil) prices proves to be transient and as the output gap continues to close, inflation excluding food and fuel may likely trend upwards and counterbalance the benefit of the expected easing of food inflation," RBI warned.

In addition, the full implementation of the recommendations of the Seventh Pay Commission in terms of payment of allowances will affect the magnitude of the impact house rents have on CPI, it said.

The government on 5 August formally backed RBI’s inflation strategy by notifying a retail inflation target of 4% with a two percentage points variation on either side as an anchor for monetary policy till March 2021.

“Fixation of an inflation target while giving due emphasis to the objective of growth and challenges of an increasingly complex economy is an important monetary policy reform with necessary statutory back-up," the government said in a statement.

In a June notification, the government said a six-member panel will set policy rates.

Rajan, after his last monetary policy review, said the governor, deputy governor Urjit Patel and executive director Michael Patra will represent RBI on the panel. The government is finalizing the other three members.