Decoding delay in the Indian judiciary

New Delhi: With over 22 million cases pending across courts in the country, delay is the biggest and most visible problem facing the Indian judiciary, Bengaluru-based research organization Daksh said.

In a report titled State of Indian Judiciary, Daksh decoded the reasons behind the falling judicial efficiency.

The organization analysed over 1,795,036 cases before 21 high courts in the country between December 2014 and 1 April 2016 to identify the reasons for the problem of pendency.

Impasse on appointment of judges

The government and the collegium of the apex court are yet to agree on formulating the Memorandum of Procedure (MoP) for appointment of judges.

Last October, a five-judge Constitution bench struck down the Constitution (Ninety-ninth Amendment) Act, 2014, and the National Judicial Appointment Commission Act that sought to give the executive a say in appointing top judges and restored the collegium system.

Currently, over 470 vacancies in various high courts are yet to be filled up. Union minister for law and justice Ravi Shankar Prasad assured the Rajya Sabha on Tuesday that vacancies will be addressed immediately. 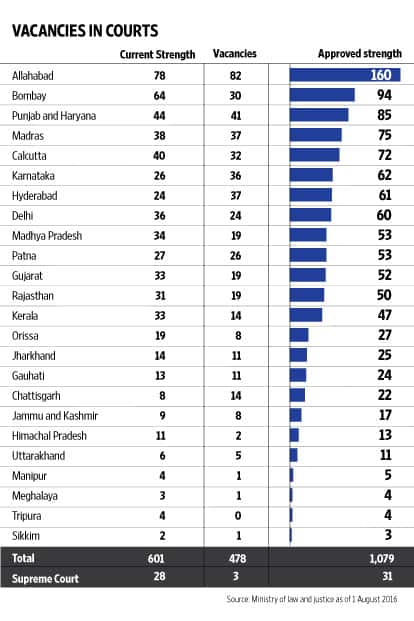 With fewer judges than required, the workload of judges goes up, resulting in inefficiency. 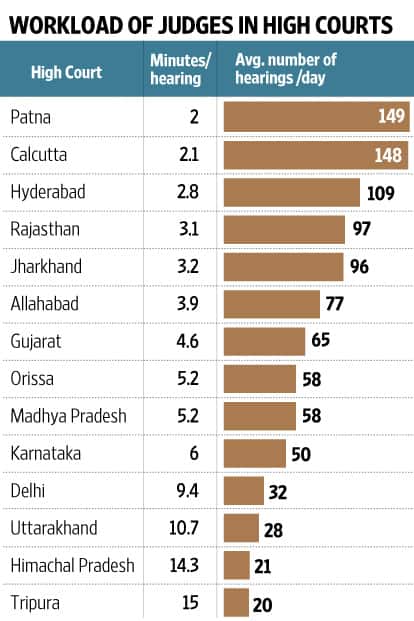 With fewer judges, the amount of time given to each case decreases drastically. For instance, the Patna high court is functioning at 50% of its approved judge strength and spends merely two minutes on an average on a case.

“Focussing on pendency can mask the extremely long work hours and stressful lives of judges, lawyers and court staff," wrote justice Gautam Patel of the Bombay high court in the report.

The report also called for citizen-centric reforms within courts to improve access to justice.

“A judge who is slated to hear 100 cases a day cannot be faulted if he is unable to hear all of them. He may have an extremely satisfactory day if he hears 80 out of the 100 listed, but that is unacceptable for those litigants whose matters are not heard...

This report is a small step in bringing the citizen into focus," Daksh said.