New Delhi: Seventeen years after the demolition of the Babri mosque in Ayodhya and 48 extensions later, the justice MS Liberhan commission of inquiry on Tuesday submitted its report to Prime Minister Manmohan Singh. The contents of the report have not been made public yet. The opposition Bharatiya Janata Party, or BJP, has demanded the tabling of the report in Parliament. 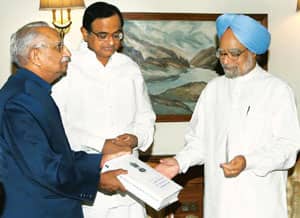 “I am a free man now...," Liberhan told reporters. “Neither can I divulge any details of the report nor can I comment on it."

The 16th century mosque was demolished in December 1992 by Hindu radicals who gathered in Ayodhya, a town in Uttar Pradesh state, after a campaign led by Bharatiya Janata Party (BJP) leader L.K. Advani to build a temple at the site that Hindus say is the birthplace of Lord Rama.

CNN-IBN reported late on Tuesday night that the Liberhan commission’s report had criticized the ‘rath yatra,’ or journey by chariot, underaken by Advani before the demolition although the BJP leader was not indicted. Then prime minister P.V. Narasimha Rao, who has since died, was blamed by the report for not doing enough to save the structure, the channel quoted the report as saying.

The commission, which was set up within 10 days of the demolition of the Babri mosque on 6 December 1992, held 399 hearings, and at least 100 witnesses deposed before it. The panel had been asked to submit its report within three months. The demolition had resulted in widespread communal riots in the country.

Advani, his colleague Murli Manohar Joshi, Kalyan Singh, who was chief minister of Uttar Pradesh at the time of the demolitions, and Uma Bharti, then a BJP leader and now chief of the Bharatiya Jan Shakti , deposed before the panel, which ended recording statements in 2005.

While Congress spokesperson Manish Tiwari said Liberhan must be thanked for the “voluminous work that he has done", the BJP criticized the commission for taking “a long time" to submit the report and said it remained committed to building a Rama temple at the Ayodhya site.