Thanks for Visiting Mint
You seem to have an Ad Blocker on. Please turn it off in order to continue, or whitelist Mint
HOW TO TURN OFF AD BLOCKER
OR
REFRESH IF YOU ALREADY TURNED OFF THE AD BLOCKER
Home >Politics >News >Efforts to thrash out blueprint for new pact make little headway

New Delhi: Midway through the climate change talks at Bali, Indonesia, talks between the 190 countries who have gathered in the city to create a blueprint for a new emission reduction pact that will come into effect from 2012 are deadlocked over the issue of how such reductions will be allocated among countries. 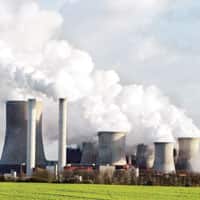 Cause of concern: Smoke coming out of stacks at the RWE-owned Neurath coal power plant near Grevenbroich, Germany. Under the Kyoto Protocol 36 developed nations are mandated to reduce their emissions in the commitment period that runs from 2008 to 2012.

“We know that we have Kyoto now but we are still to see how it works out. India, along with other developing nations understands the importance of securing an agreement on starting the negotiation process for the second commitment period and want it to begin at these talks," said a senior Indian delegate at the Bali conference, who did not wish to be identified.

That is looking increasingly difficult now because two clear and opposing positions have emerged during the first week’s talks. One involves “a more effective implementation of the Kyoto Protocol, as the European countries are way behind reaching their 2012 targets," according to one of India’s negotiators at the conference who too did not wish to be identified. The other involves “a totally different type of agreement, which will reduce the commitment amounts of the developed nations and shift the burden on to developing nations," this person adds.

The current position of the United Nations Framework Convention on Climate Change (UNFCCC) is that different nations have different responsibilities in terms of accepting mandatory carbon dioxide (CO2, a greenhouse gas) emission cuts. It accepts that industrialized nations own up more responsibility because they emit more CO2 and should, therefore, shoulder a heavier burden in terms of commitments to reduce emission.

Canada and Japan, two of the developed countries, oppose any future commitments. And the US is yet to sign even the Kyoto Protocol. The position of the George Bush administration is that emissions can be reduced through the application of appropriate technology in production processes.

“Japan and Canada have shown absolutely no appetite for future commitments. Moreover, Japan has been very clear that it wants to do away with obligations under the Kyoto Protocol. Instead, it wants the climate change framework to work on a technology transfer basis," said the negotiator.

Kapil Sibal, Union minister for science and technology and earth sciences, is the head of the Indian delegation.

Meanwhile, the US has called for “major economies" to meetings on climate change in Hawaii in December, another in Paris in February and a third major summit in July, to start a parallel process.

Developing nations such as India, China, Brazil and South Africa have maintained their common agreement towards the post-Kyoto commitment period. “Our PM has made a very fair and generous offer at the last G-8 summit, when he asked developed nations to rapidly cut their per capita emissions and committed that India will never cross that per capita limit. A reduction in India’s current per capita emissions is totally unacceptable," said the negotiator.

The developed world on the other hand believes that if developing countries do not take up commitments, it will not be possible to tackle the adverse effects of climate change. “Even if UK says it will be a zero carbon economy by 2050, and countries like India and China continue to grow and emit as they are (doing) today, it will not mitigate climate change at all," said Hilary Benn, the UK’s minister for environment, in a recent interview.

Even as the stand-off continues, developing countries are finding it difficult to present a united face.

Last week, the G-77, a grouping of 77 developing nations formed in 1964, differed over the issue of extending carbon credits to initiatives that avoid the felling of forests or the so-called avoided deforestation. The countries are yet to agree on what they think should be eligible for compensation: avoided deforestation, conservation, or forest management. “It is unlikely that this issue will be resolved here," said the negotiator.

However, developing nations appear united in terms of their stance on the need to operationalize the adaptation fund, which will provide financial aid to them to adapt to the effects of climate change such as crop failures and intense or increased natural disasters.

“Developing countries are pushing for this and have submitted a proposal to increase the sources of revenue to this fund. The proposal, however, has been largely ignored by the richer nations," the negotiator added.

The adaptation fund, which is held by the UNFCCC, has collected $67 million (Rs264 crore) till now by charging a 2% cess on carbon credit transactions under the Clean Development Mechanism (CDM), an arrangement under the Kyoto Protocol which allows industrialized countries with a greenhouse gas reduction commitments to purchase carbon credits generated by projects that reduce emissions in developing countries.

With talks entering the final week, delegates are looking to renew their efforts to evolve a common position on critical issues of transfer of technology to reduce emissions to developing countries, financing developing countries to adapt clean technologies, and a post-Kyoto deal. A meeting of the finance ministers of the countries will be held over the next two days to address the issue of financing the technology transfer.