Home >Industry >Normal to excess rains in 87% of India so far: IMD

Normal to excess rains in 87% of India so far: IMD

New Delhi: The southwest monsoon was 3% short of its long-term average till the end of August, India’s weather office said on Thursday. Around 87% of the country has received normal to excess rainfall so far.

Including 1 September, the shortfall has come down to 2%.

Rainfall distribution in July was “quite good", said N. Chattopadhyay, deputy director general at the agricultural meteorology division of India Meteorological Department (IMD). “The beginning of August saw dry spells in the southern peninsula region particularly the Marathwada, Vidarbha and Rayalaseema regions. Incoming of rains from 27 August improved the condition of soyabean, black gram, green gram and cotton in these regions. These regions were able to recover the deficit which was formed in the beginning of August," he added.

India receives almost 80% of its annual rainfall during the southwest monsoon, which irrigates more than half of its farm lands. 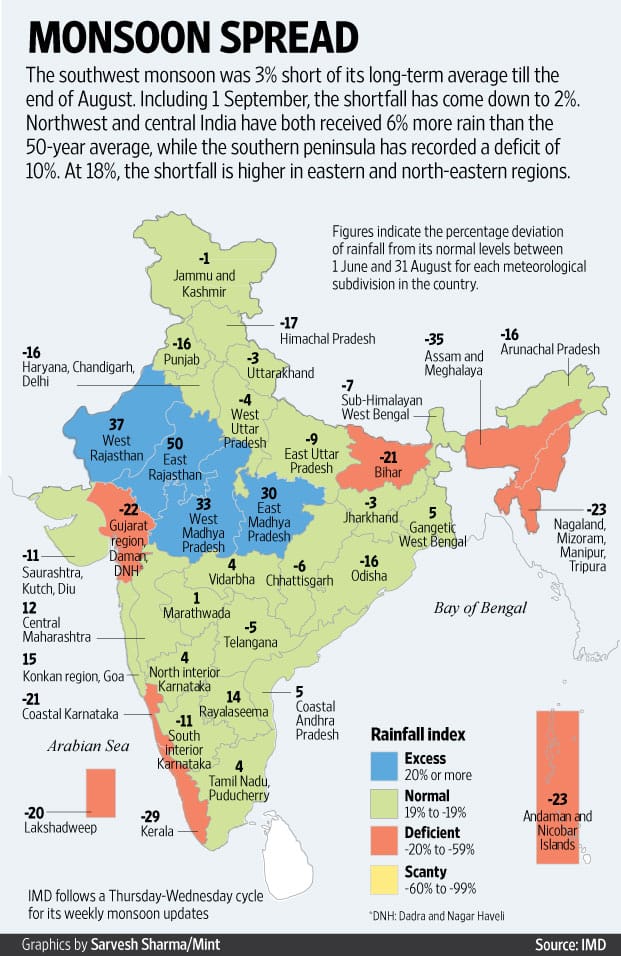 Parts of the country which are still short of rains include Kerala, coastal Karnataka, Bihar, Gujarat, Daman, Dadra and Nagar Haveli, Lakshadweep, Andaman and Nicobar Islands and some northeastern states. Delhi, Haryana and Chandigarh which were deficit till recently have now received sufficient rain.

Northwest and central India have both received 6% more rain than the 50-year average, while the southern peninsula has recorded a deficit of 10%. At 18%, the deficit is highest in eastern and northeastern regions.

Central India, parts of northern India and southern Peninsula will be dry from 2 September, IMD said.

According to IMD, north-west, central, west and southern India will get below-normal rainfall in the next 8-10 days. The situation will improve thereafter. On the other hand, rainfall will increase considerably over many parts of east and northeast India during the next two weeks. In east and northeast India, rainfall would be normal to above normal. Bihar will receive widespread rainfall in the coming week with heavy showers on 5 September.

“Though there is deficient rainfall in north east India, Bihar, Kerala and Gujarat state, there is no adverse impact on crop growth due to availability of enough moisture in the crop field," added Chattopadhyay.

According to Mahesh Palawat, chief meteorologist at Skymet Weather Services Pvt. Ltd, July recorded a monsoon surplus of 7% while August showed a deficit of 9%.

Sowing of kharif crops has been completed in 96% of the seasonal area, with record sowing of pulses, data released by the agriculture ministry last Friday showed. So far, 101.9 million hectares have been planted, 4.7% more than the area sown by this time last year.

Heavy rains have triggered floods in Uttar Pradesh, Bihar, Uttarakhand, Rajasthan and Madhya Pradesh, West Bengal and Sikkim. According to the home ministry’s disaster management division, more than 480 people have died due to the rains and flooding since the onset of monsoon in June.