Delhi smog to continue for next two days

Delhi deputy CM Manish Sisodia says primary schools in Delhi will remain closed on Wednesday and the holiday can be extended, if needed

New Delhi: Delhi, and the national capital region (NCR) centred on it, came under a heavy blanket of smog on Tuesday, with air quality reaching “severe" level. The situation is not expected to change for the next two days.

On Tuesday evening, Delhi’s deputy chief minister Manish Sisodia announced that primary schools in the national capital will remain closed on Wednesday, adding, if needed, it will be extended. He also said the outdoor activities in schools will be stopped.

In a similar situation at the same time last year, multiple courts had passed several orders to control stubble burning in northern states and implementation of a graded response action plan (GRAP) to tackle high levels of pollution.

But, so far, authorities have failed in preventing stubble burning in Punjab and Haryana in winters, which intensifies air pollution in the Delhi NCR region. 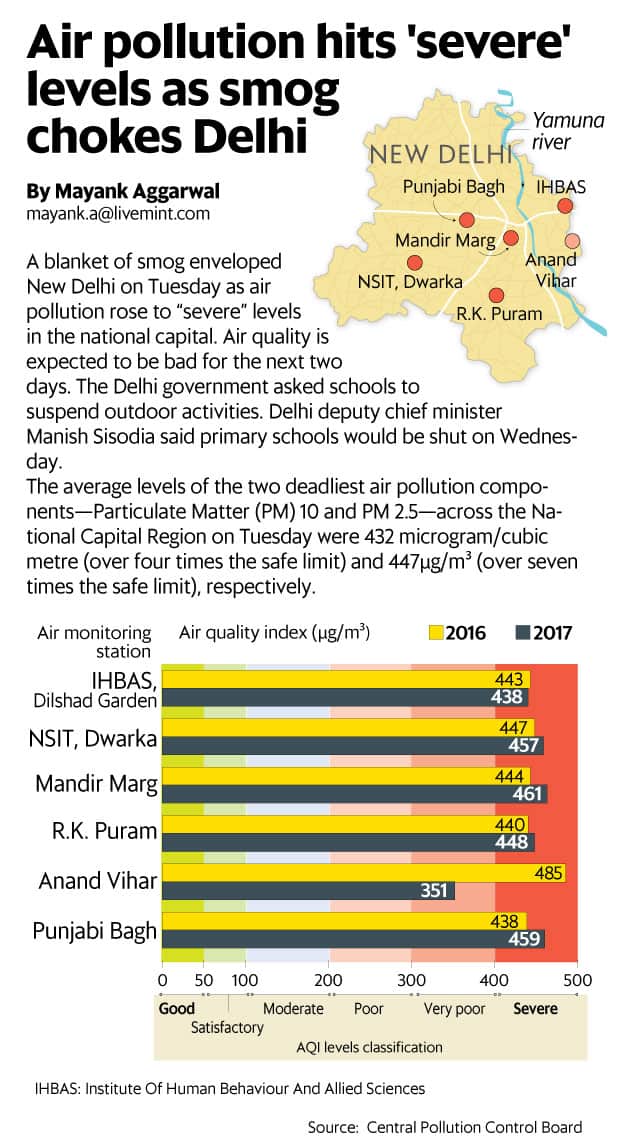 According to data from the Central Pollution Control Board (CPCB), air quality at the majority of the monitoring stations across Delhi and adjoining towns touched “severe" levels on Tuesday.

The Indian Medical Association asked the Delhi government to stop all outdoor activities and sports in schools. Earlier in the day, Delhi’s chief minister Arvind Kejriwal announced that considering the high levels of pollution, he has asked Delhi’s education minister Manish Sisodia to consider closing schools for a few days. “Every year this happens during this part of year. We have to find a solution to crop burning in adjoining states. All of us together have to find a solution to this. Every year, during this time of the year, Delhi becomes a gas chamber for almost a month," tweeted Kejriwal.

The Environment Pollution (Prevention and Control) Authority (EPCA), which is tasked with implementation of GRAP, also met on Tuesday and asked governments of Delhi and adjoining states to take a series of immediate steps to control pollution.

When air quality touches “severe" level, it causes respiratory problems to even healthy people and seriously impacts those with existing diseases. In such conditions, outside exposure and activities, including intense physical activities should be minimised.

EPCA also directed immediate measures like closing of brick kilns, stone crushers, intensification of public transport service, increasing frequency of service of Delhi Metro, intensification of mechanized road sweeping and sprinkling of water, continuation of the ban on use of generator sets in Delhi, immediate enhancement of parking fee by four times, ban on use of coal and firewood in hotels and eateries and others.

EPCA, however, noted that “given the prevailing conditions and the concern about the possible deterioration in weather conditions, it is possible that severe plus or emergency conditions would need to be imposed in the coming days" and directed governments in Delhi NCR to ensure that all agencies are ready to implement tougher measures as laid down in GRAP. EPCA advised schools to stop all outdoor activities and to keep exposure to a minimum and offered a similar advice to “all citizens of Delhi and NCR".

Under GRAP, the task force led by CPCB has been monitoring air quality in NCR. During EPCA’s meeting, CPCB’s member secretary, A. Sudhakar explained the reasons behind high pollution.

“Currently, Delhi and its neighbouring region are seeing almost still conditions at the ground level, but in the upper atmosphere there are two wind masses—one from Punjab, which is bringing pollutants from crop burning and the other from eastern Uttar Pradesh, which is bringing moisture. These are colliding at the higher altitude. This is leading to conditions where there is both moisture and pollution as well as no wind at the ground level," said Sudhakar while adding that it is expected that conditions will remain severe over the next two days as per the forecast made available by India Meteorological Department (IMD).

“We have achieved some things—often in the face of enormous odds—and we have provided some solutions. So far, every solution that has been suggested has been contested and delayed. Today, weather conditions in Delhi NCR are adverse, and the wind is bringing pollution from farm fires in Punjab and moisture from the east. In terms of air pollution, things are expected to get much worse in the coming days. We, therefore, need to act decisively," Lal added.

It also asked all state pollution control boards to immediately impose fines on all road constructing agencies where there are inadequate dust control measures. In accordance of Construction and Demolition Rules, which allow for penalty of up to Rs5 lakh for construction dust mismanagement, EPCA directed for a fine of Rs50,000 per day per stretch for inadequate road dust control.

EPCA also called for intensifying the enforcement of non-destined goods traffic into Delhi by physically checking all vehicles and turning them back.

EPCA called for long-term actions and said unless that is done, air pollution levels cannot be brought down. It called for drastic actions like stringent monitoring of emissions in industrial estates and as well as from illegal industries, switch-over to gas in vehicles, power plants and industry, massive augmentation of public transport, massive action to change garbage management system and others.