India's declining debt-to-GDP ratio will create the basis for a lower interest rate regime, says IMF in its fiscal monitor report, and set the stage for a sovereign rating upgrade

New Delhi: The International Monetary Fund (IMF) said that India’s combined gross debt, including that of the central and state governments, is set to decline by almost nine percentage points to 61.4% of gross domestic product (GDP) by 2023-24.

Not only will this have a salutary impact on the macroeconomic framework, especially in creating the basis for a lower interest rate regime as the fear of the crowding-out effect of excessive government borrowings recedes, it can also trigger a sovereign rating upgrade for Asia’s third-largest economy. 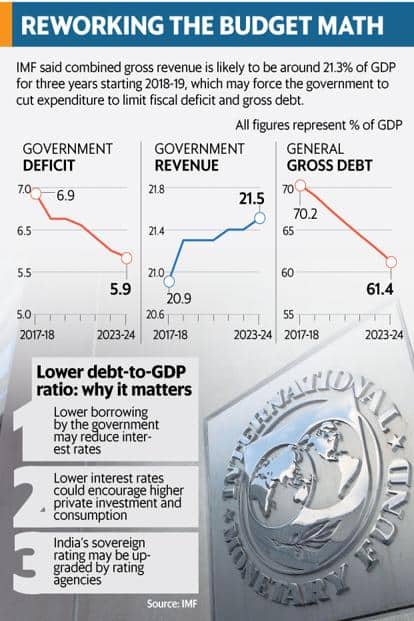 Though the calculations of gross debt by IMF in its fiscal monitor report released on Wednesday and India differ, particularly regarding accounting of divestment and licence auction proceeds and some public sector lending, the projections by the multilateral lending institution are mostly in line with the central government’s target of bringing down debt-to-GDP ratio to 40% by 2024-25, announced in budget 2018-19. The N.K. Singh committee on fiscal discipline had favoured a combined debt-to-GDP ratio of 60% by 2022-23—40% for the central government and 20% for state governments.

“What will support a gradual decline in debt-to-GDP ratio is both gradual reduction in overall deficit as well as continued high nominal GDP growth," said Andreas Bauer, IMF’s senior resident representative for India.

N.R. Bhanumurthy, professor of economics at the National Institute of Public Finance and Policy, said it will be a very good development for the Indian economy if IMF’s debt-to-GDP ratio projection is achieved. However, he cautioned that higher expenditure demand for central government schemes as well as the deteriorating condition of state finances may make this difficult to realize.

“The absence of an expenditure-shifting fiscal policy from consumption to capital expenditure may make the drastic reduction in debt-to-GDP ratio more challenging," he added.

Through an amendment in the Fiscal Responsibility and Budget Management framework, the 2018-19 budget has stopped setting targets on revenue deficit reduction, which analysts apprehend may sway the government’s expenditure towards consumption spending over that of productive capital expenditure.

The government has committed to bring down its fiscal deficit as a proportion of GDP to 3.3% in 2018-19 from a higher-than-anticipated 3.5% last year.

Fiscal consolidation was paused in fiscal year 2017-18 by the central government as the economy recovered from disruptions related to demonetization and the roll out of the new national goods and service tax (GST).

“Relatively buoyant revenues supported by base-broadening efforts and lower capital expenditures were offset by higher spending (including higher compensation to states for the rollout of the new GST) and lower profit transfers from the Reserve Bank of India due to costs incurred during the demonetization," IMF said in its fiscal monitor report.

IMF said that in India, a return to a gradual path of growth-friendly fiscal consolidation is desirable to create fiscal space, but full and smooth implementation of the GST is necessary to avoid tax revenue underperformance, resulting in cuts to capital expenditures.

The multilateral lending institution said combined gross revenue for the centre and states is likely to hover around 21.3% of GDP for three consecutive years starting 2018-19, which may force the government to cut overall expenditure to limit fiscal deficit and gross debt. IMF said the government needs to reduce fuel and food subsidies as well as carry out tax reforms to support fiscal consolidation efforts over the medium term.