Home >News >World >The flight of capital from China

The flight of capital from China

Mumbai: The slowdown in China’s exports over the past few years has meant a rapidly shrinking current account surplus. But what’s worse, a gloomy growth outlook has been accompanied by capital outflows. The rising capital account deficit is largely because of two factors: one, increasing Chinese foreign direct investment (FDI) in the rest of the world, and two, decreasing confidence among foreign portfolio investors in China’s economy.

As Chart 2 shows, Chinese outward FDI is not only rising, but is likely to have exceeded inward inflows in 2014. The nature of this investment has also been changing, says KPMG’s China Outlook 2015.

Thus, newer investments are being made in sectors such as insurance and real estate compared to natural resource-based industries earlier.

Developed countries are the new destinations.

Particularly stark is the flight of capital into overseas property. The attempts by the government to cool the local real estate market, such as mortgage restrictions, as well as increasing risk in the domestic property market, saw a decrease in demand for mainland residential properties among the high net worth individuals.

According to real estate consulting firm CBRE, Chinese investment in commercial properties abroad grew 72% annually during 2011-14. For the twelve-month period ended March, the Chinese bought property worth $28.6 billion in the US. In the US and Australia, Chinese investors are the biggest foreign buyers of real estate. Australia, for whom China is the biggest trade partner, last year saw politicians calling for an investigation into Chinese investment in residential real estate, amid fears that middle-class Australians were being priced out by Chinese buying in cities such as Sydney and Melbourne.

Apart from these long-term capital flows, there has also been an increase in the so-called hot money flows from China. (Chart 3). Such flows refer to short-term, cross-border capital flows, often speculative in nature. Stock market portfolio investments constitute a part of these hot money flows. Growing concerns over the long-term prospects of the Chinese economy and the possibility of the US Federal Reserve hiking interest rates have been weighing on investor sentiment for some time, roiling markets. (Chart 4). The Chinese authorities responded to the plunge by banning anyone, other than approved brokers, from short-selling. Subsequently, the government directed large mutual funds and pension funds to buy stocks.

However, despite these efforts, Chinese stock markets have not been able to recover from the slump witnessed since June, and data show that hot money outflows have continued unabated.

Clearly, rising hot money outflows have led to depreciation in the Chinese yuan. Even before the People’s Bank of China (PBoC) announced devaluation in mid-August, the spot rate of the Chinese yuan versus the US dollar was trading weaker than the central bank’s own mid-point fixing. As Chart 5 shows, dollar-yuan spot was trading above the mid-point fixing since December 2014 itself indicating a weakening bias. 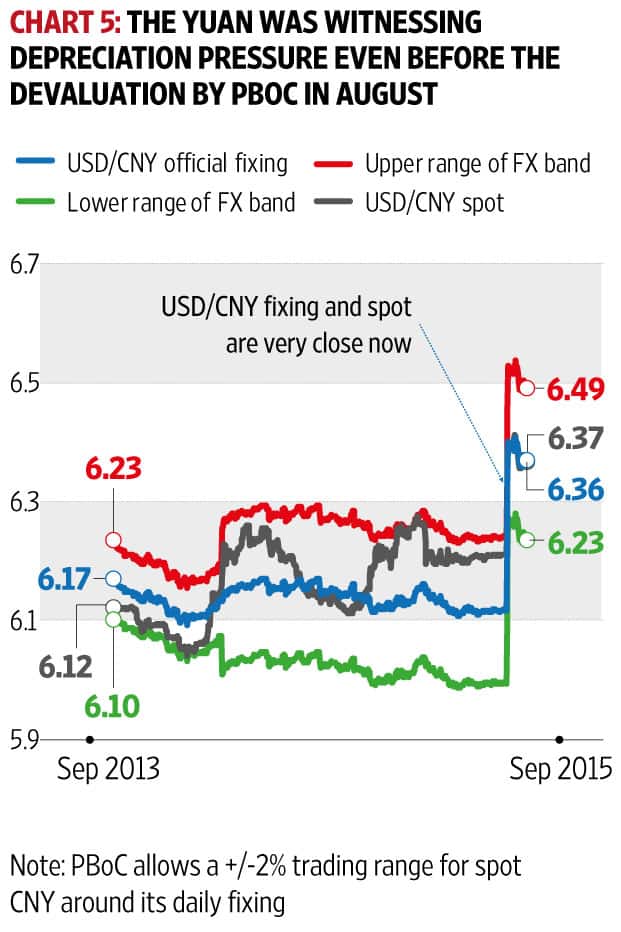 Thus, given the capital outflows, China’s foreign exchange reserves have continued to fall since mid-2014 (Chart 6). The decline in forex reserves accelerated in August when the total holdings fell by $94 billion—the steepest monthly fall ever. The substantial fall in reserves also indicates that the PBoC has been intervening in currency markets to stem excessive volatility. The central bank does not seem to have any problem with allowing the currency to depreciate gradually, especially given the recent depreciation in other Asian currencies (Chart 7). This is the fourth of a five-part explainer data series on China.

Part I talked about why Chinese economic growth is decelerating, Part II about structural problems facing China’s economy and Part III about the risks from a debt-fuelled investment boom.

The series will conclude with a look at the implications of the Chinese slowdown on the rest of the world.