Classical music struggles to hold on to the &#8216;guru-shishya parampara&#8217;

Classical music struggles to hold on to the ‘guru-shishya parampara’

Bhopal: A dirt road veers off towards a two-storey building outside Bhopal, the home of peace. Morning sunlight streamed in ribbons through the netted door, as six disciples ofDhrupad—one of the most ancient surviving form of Indian classical vocal music—practised their craft in the presence of their guru, Ramakant Gundecha. 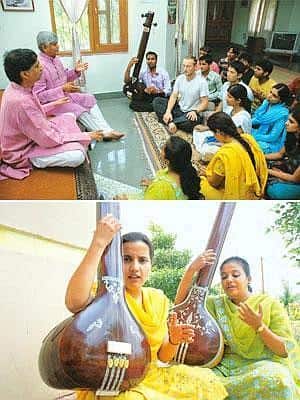 Between checking his BlackBerry messages and taking sips of water from a tray laid out with white and yellow champa flowers, Gundecha corrected, coaxed and wheedled his disciples (including Australian, Ukrainian and Japanese students) to hit the right notes. Where they stumbled, he illuminated the nuanced art of voice projection, lifting his hands and eyes to a distant horizon in pursuit of that perfect pitch where the note and his voice melded into a moment of absolute quiet. And in that magical moment, everything ceased to exist.

The Gundecha Gurukul is one among a few left that provide a setting necessary to teach Indian music: a robust guru-shishya parampara where in addition to learning, teachers offer students lodging, boarding and occasionally a stipend. Every major gharana—the Mewati, Jaipur, Agra, Benaras, Gwalior—has a rich history of supporting disciples while they learnt music in the homes of their teachers. However, this old tradition drew to a close in 2006, when one of its last major practitioner Ustad Bismillah Khan died, leaving behind a huge family and over 50 disciples, whom he had supported in his Varanasi home.

The unceremonious end of a vibrant tradition does not bode well for the world of Indian classical music, experts say. The ancient oral tradition languishes now in a modern world, where mounting economic pressures have robbed music halls of gurus with the ability and will to support students who come to learn music at their doors.

The problems are many: connoisseurs of music lament the disappearing infrastructure, while experts lament the disappearing talent. “There is a shortage of gifted students and a greater shortage of gifted teachers," said Arvind Parekh, a sitar teacher in Mumbai and trustee of the ITC Sangeet Research Academy in Kolkata. “We are desperate to find the good gurus. Gurus who know, have the ability to analyse and articulate what they know, who can demonstrate their knowledge and have the ability to make a student…where are the teachers?"

Conversations with music lovers usually end in a sad shake of the head and a long helpless sigh. The debates and concerns are many, but on one thing, they all agree—the old templates are failing and new formats of guru-shishya parampara must be crafted to save the art.

Aastha Tripathi, 27, and Rupali Jain, 29, both students at the Gundecha Gurukul with a masters degree in music from Bhopal University, say that the academic setting of learning music through textbooks and classroom sessions, where a teacher defined a raga and its notes for a bunch of students taking written notes, is stifling.

“What use is music that you cannot create? To know a raga is to feel it, know its contours, know where you want to caress the soft note and go the note, where to linger and where to turn. The academic degree gave us the grammar of the music, but that was about it. It did not teach us how to perform. So we came to the Gundecha Gurukul to learn," said Jain.

The importance of guru-shishya tradition in Indian music can never be overemphasized, said Gundecha. “Let me give you an example. Write down “kai riyon" in your notebook. Show it to five people. I guarantee that they will all say it differently. But if you listen to me say it 5-10 times, then when you are writing this in your article, you will know the exact pronunciation at least. At least you will know what is correct."

Jain says they never regretted their time in the gurukul. “This is the life we wanted. The gurukul made performers of us, not the university," she explained. In the last two years, the two of them have transformed from shy musicians to award-winning performers. Last month, they sang together at a gathering of the Sur Singar Sansthan in Mumbai and won the Surmani title, bestowed on the best vocal performers of the contest. Next month, they will set out on a tour through Dharwad, Pune and Bangalore.

In The Music Room, Namita Devidayal explains the importance of learning by listening, that there are srutis, half notes and quarter notes that fill the intervals between two notes…it can entirely change the reality of the notes. For instance, how you reach a particular note is as important as the note itself. It may be arrived from below, or above, after caressing that hidden note that hovers next to it and it will evoke a completely different sensation than if the musician were to meet the note directly. This explains why Indian music cannot be learnt from textbooks. It has to be taught by a guru who can explain these nuances, coax the right note out of the student and help her achieve it. How would even the most articulate text manage to explain that you have to meet the swara gradually and lovingly and with a touch of foreplay?" she said.

It is this realization—that music that has been preserved in an unbroken oral tradition for centuries may be lost if the tradition disappears—that has often spurred the consecration of gurukuls in India and abroad. While the Ravi Shankar Centre has become increasingly popular in Delhi, Ustad Ziafariduddin Dagar runs a gurukul in Panvel where students come for a few hours every week. Pandit Hariprasad Chaurasia set up his first Vrindavan Gurukul in Mumbai and another in Bhubaneswar, Manoj Hangal is setting up a gurukul in the memory of his grandmother Gangubai Hangal in Hubli, and Ustad Zakir Hussain is in the process of setting up his own gurukul.

But these gurukuls are too few in number, too few to have any real impact, said Parekh, who helped set up the ITC Sangeet Research Academy. “What we need is to think of new ways to preserve music. We know that the classroom style teaching will not cut it. The old method of giving scholarships to students did not really work because there was no way to monitor progress. So the National Centre for the Performing Arts (in Mumbai) started an experiment. It gave an honorarium of Rs1 lakh to two good music teachers, who will teach two or three students for free. So far, it has worked well and there are plans to expand the programme," he added.

Parekh hopes to convince his institute, ITC Sangeet Research Academy, to adopt the programme. But there is much opposition, he said. “People say that will defeat the purpose of having a gurukul. Students will be robbed of a chance of living in a beautiful place, close to nature, God and guru…, but I say what is the point of being there if the good teachers will not come? I think you should send the student to the guru," he added.

That is what organizations such as Society for Promotion of Indian Classical Music and Culture Amongst Youth (Spic Macay) have been trying to do for three decades: send students to live with gurus.

While the organization has exposed generations of Indian students to culture—dance, music and yoga—through conventions, baithaks, camps, lectures and musical fests in cities and second-tier towns in every state in India, it has also tried to renew the guru-shishya parampara through a programme where students live with a guru during the summer. A scholarship scheme was set up in 1985, when about 50 students spent their summer in the homes of gurus across the country. This year, the organization sent 103 students to 21 gurus. “The idea is not to train the students in any art, but it is to inculcate values that inspire us as human beings," said Harsh Narayan, national coordinator of the Scholarship Scheme.

Many others have begun using the Internet, with its voice-audio applications such as Skype to teach students in distant countries. Parekh, who plans to teach his students in London through Skype said, “The Internet has turned out to be a blessing. Earlier, I could go to London only twice a year. My students there could get only eight, maybe 10 classes with me. They could not come here, but in my absence, they learnt from any teacher passing through London. That does not work. You have to stick with one style. Now, with the Net, they will not need to do that. They can learn from me even though they are not in the same room or even the same continent!"

For young disciples in foreign lands, online teaching has been a blessing. US-born Aarshin Karande, 18, says he was enchanted by Indian classical music since he was five. He began learning vocal music from teachers in the US when he turned six. “I used to learn from my teacher in Seattle. But when he left to work in California, we just continued our lessons online over Skype. It is not exactly like we are in the same room, but it is close. I believe that technology has made the guru-shishya parampara more practical (for modern life)," Karande said, speaking from his Seattle home.

But even though new techniques seem to be emerging, the old guard feels it is not quickly enough. Ustad Dagar, 78, an old man with wispy white hair and intense eyes, who is one of the oldest living practitioners of Dhrupad, sat in his riyaz room under the idol of goddess Saraswati, said much was at stake. “Whatever is happening is at individual level. Everyone is doing his own thing. It is all in isolation…and we need more. This music is not music. It is meditation on humanity, on divinity. Without patience to teach and learn, the meditation is lost," he said.

Then, adding with urgency that only an old man with a lot to give can feel, he said, “There must be another way to keep it alive."