After the speech, approval of Modi's performance rose to 86%, according to FourthLion Technologies

New Delhi: Prime Minister Narendra Modi’s job approval ratings went up after he delivered his first independence day speech less than three months into office, according to opinion polls conducted before and after his address to the nation on Friday.

As many as 82% of the people polled before the speech said they approved of the job Modi is doing as Prime Minister, according to the instaVaani lightning poll conducted by FourthLion Technologies on 14 August. InstaVaani is a high-speed polling technology that enables instant collation of survey results.

After the speech, approval of Modi’s performance rose to 86%, said FourthLion Technologies, a company that uses data and analytics to provide insights into governance and politics. The approval was high throughout the country, from a low of 71% in Delhi to a high of 90% in states such as West Bengal. 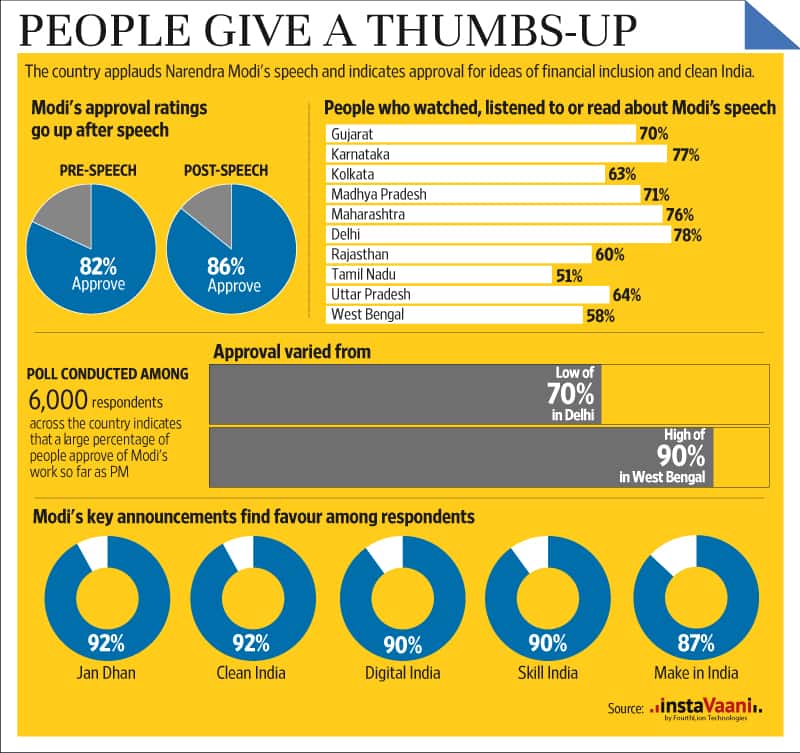 To be sure, his speech in Hindi was not followed widely in areas of the country where the language is not spoken. For instance, while 78% of the people polled in Delhi said they had tuned into Modi’s speech, only 51% of those polled in Tamil Nadu and 58% in West Bengal said they watched, listened, or read about the speech.

Among the key announcements Modi made, the promise of Jan Dhan, a scheme to provide bank accounts and debit cards with life insurance cover to poor households, was welcomed by 92% of the people polled.

His call for a cleaner India resonated with 92% of the people.

Modi invited global firms to set up factories in India so that manufacturing receives a major boost. His “make-in-India" call found favour with 87% of the people polled.

The pollsters also found that his promise to impart training to the country’s youth, so that they have the requisite skills to find employment, was approved by 90% of the people.