Isro is the fourth agencyafter that of US, Russia and Europeto either send a successful probe to Mars or land on the planet

New Delhi:India’s Mars Orbiter Mission, Mangalyaan, entered the orbit of the Mars on Wednesday at the end of a 300-day voyage, making India the first country to successfully send a mission to the Red Planet on the first attempt and helping carve a distinguished spot for the nation in the global space community.

“History has been achieved today. Despite all our limitations, we have gone beyond the boundaries of human enterprise. The odds were stacked against us, but we achieved success in our maiden attempt with an indigenous spacecraft developed in a pan-Indian effort," said Prime Minister Narendra Modi who was present at the Telemetry Tracking and Command Network in Bangalore to witness the event.

“Humanity would not progress if we do not take risks towards the unknown. We have a great legacy and we must help the world understand the mysteries of the universe," Modi added.

The first confirmation of the Mangalyaan reaching the Martian orbit was received at 8.10am on Wednesday, setting off cheering and jubilation among scientists at ground control. 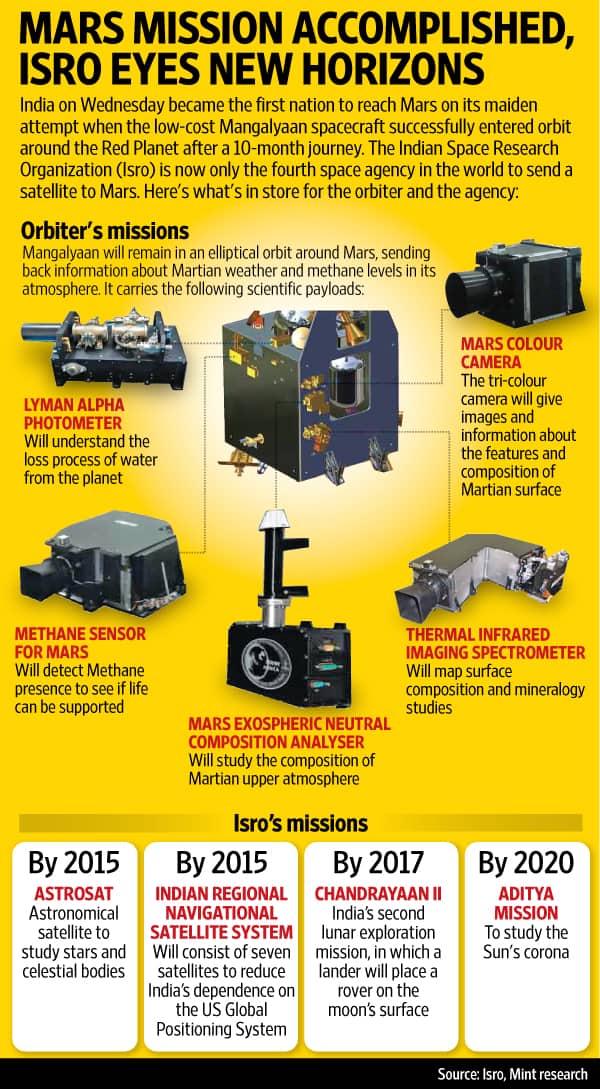 Just before reaching the Martian orbit, the orbiter changed its direction by starting a “forward rotation" operation at 6.56am. After this, the main engine of the spacecraft was fired up for 24 minutes to bring down the orbiter’s speed to exactly 4.5km per second— any slower and it would crash into Mars, any faster and it would fly past.

Manoeuvring the spacecraft during this phase was particularly challenging because the rocket was hidden from the Earth’s view and its communication with ground control was blocked. But the Mars orbiter was able to carry out the manoeuvre autonomously as the commands for it had been uploaded from Bangalore on 16 September.

Ground station support during the manoeuvre was provided by the Indian Deep Space Network in Bangalore, and the US, Spain and Australia chipped in. A microprocessor-based control system aboard the spacecraft acted as its electronic brain—as it does whenever there are communication gaps with ground control.

On Monday, after reaching the Mars sphere of influence, Isro had successfully test-fired its liquid engine for four seconds—for the first time after a long slumber since December—to change the Mangalyaan’s velocity and correct its trajectory.

The low-cost spacecraft will now stay in the Martian orbit for six months, moving along an elliptical path as it gathers scientific data about the Red Planet. Now that the spacecraft has been “captured" by the Martian orbit, once the orbit is stabilized the scientific payloads will start performing functions sequentially over the next few days.

Isro’s 1,340kg Mars orbiter was launched aboard the Polar Satellite Launch Vehicle (PSLV-C25) on 5 November 2013, from the Satish Dhawan Space Centre in Sriharikota. The orbiter is carrying five scientific payloads weighing a total of 15kg, which will observe the Martian surface, atmosphere and exosphere extending up to 80,000km.

The data is expected to give scientists a clearer understanding of the evolution of Mars from observations of its geological and biogenic processes. The payloads include a camera, two spectrometers, a radiometer and a photometer. These indigenous scientific instruments will explore Mars’ surface features, morphology, mineralogy and atmosphere. In particular, scientists will look for traces of methane, which could signify the presence of life forms on the planet at some point of time.

“It is huge from the technological demonstration point of view as it was our first interplanetary mission testing our deep space exploration capabilities. Although this does not have a direct economic impact, such a cost-effect mission successful in its maiden attempt establishes a great image for us in the global space community," said Rajeswari Pillai Rajagopalan, senior fellow at Observer Research Foundation, a New Delhi-based think tank.

“This could make India an attractive commercial destination for satellite launches, satellite fabrication and even data sharing with other countries. Considering China’s rise as a space power, India cannot afford to sit on the sidelines and it has to prove its technological capabilities now and then to stay in the game," Rajagopalan added. China’s only attempt to reach Mars, in 2011, was a failure.

India launched its first space rocket in 1963 and its first satellite in 1975. Although Isro has concentrated its efforts into developing satellites and technologies for the country’s socio-economic development, it has recently shown renewed interest in deep-space exploration, with the Chandrayaan I mission gathering data that revealed water formations on the moon. The Mars mission is a natural progression in its quest for deep space exploration.