Wholesale inflation eases to 2.17% in May

The sequential decline in WPI inflation in May was broad based, with all major sub-groups, except manufactured non-food products, recording a slide in prices from the year earlier

New Delhi: India’s wholesale inflation eased to 2.17% in May from 3.85% in the previous month because of a fall in the prices of primary food items, fuel and minerals.

The sequential decline in the WPI inflation in May 2017 was broad based, with all the major sub-groups, except manufactured non-food products, recording a slide in prices from the year earlier.

Fall in the prices of the primary food items and minerals was in light of unseasonal weakness in various food prices and the trend in global commodity prices. 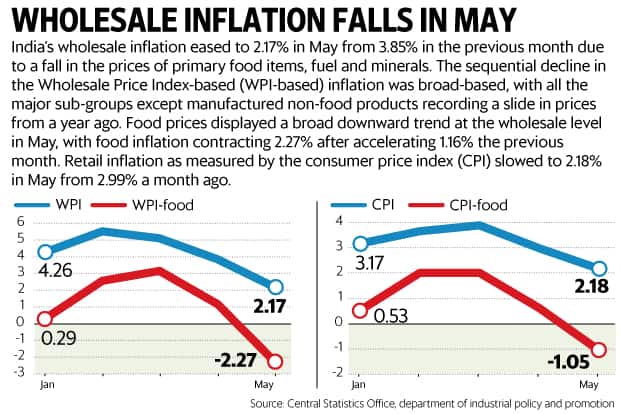 Food prices displayed a broad downtrend at the wholesale level in May 2017. Food inflation contracted 2.27% after accelerating 1.16% in the previous month with prices of all food items declining. A massive decline in the vegetable prices was noticed. Inflation in vegetables contracted 18.15% in May compared with a 7.79% contraction in the previous month.

Inflation in minerals also contracted 3.17% in May from a 8.09% increase in the preceding month.

Fuel and power inflation contracted 11.69% in May after expanding 19% in the previous month.

“The considerable easing in crude oil prices in the first fortnight of May 2017 contributed to a decline in the prices of diesel and petrol in the subsequent fortnight, which led to dampening of the headline inflation to some extent," said Aditi Nayar, principal economist at rating company ICRA Ltd.

Retail inflation, as measured by the consumer price index (CPI), slowed to 2.18% in May from 2.99% a month ago as food prices fell from their year-ago level.

For the month of May 2017, both CPI and WPI are converging towards each other. As per the State Bank of India (SBI) report dated 14 June this has been possible due to introduction of new base year series. “This has been possible as both the series have same base year of 2011-12. The better and enhanced representation (the number of price quotations has increased significantly in new series) has reduced volatility of new WPI series significantly and brought it close to CPI, which is good signal for policy-makers as by targeting CPI they will automatically be targeting WPI as well," quoted the SBI report.

Economists said lower CPI and WPI numbers aren’t likely to provide room for any policy rate cut due to uncertainty regarding the implementation of goods and services tax (GST), farm loan waiver and wage inflation.

Last month, the Department of Industrial Policy Production (DIPP) updated WPI to the new series with 2011-12 base year by assigning revised weights to the list of items it tracks to better reflect the price situation. It also excluded excise duty while computing WPI to insulate it from changes in fiscal policy such as implementation of GST.

Vaswati Hazarika and Shrey Jain contributed to this story.