New Delhi: More than a year after his arrest, former telecom minister A. Raja on Wednesday applied for bail in the lower court that is hearing the case of alleged irregularities in the allocation of second generation, or 2G, spectrum and licences. 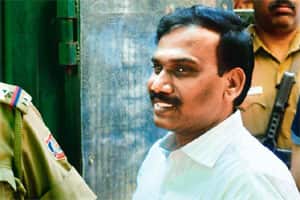 Raja has applied for bail on grounds that the case against him is “false and fabricated". He has sought parity with his co-accused, who are all out on bail. The lower court gave the Central Bureau of Investigation (CBI) until 11 May to respond to the bail application.

Raja was arrested on 2 February 2011 for his role in overseeing the allotment of telecom licences and spectrum in 2008. The allocation, allegedly designed to favour a few companies, is popularly known as the 2G scam.

Unlike the other accused, who applied for bail on mulitple occasions, this is the first time Raja is seeking bail.

The high court had taken cognizance of the news reports on the grant of bail to Chandolia and suspended it, saying that his release would have an impact on Behura’s bail plea, on which the verdict was then reserved. Later, Behura was also denied bail by the high court. Behura challenged the 16 December high court order, which denied him bail on the grounds that he was the “perpetrator" of the minister’s plans and that he could not, therefore, be equated with the others released on bail.

The apex court had, on 7 December, put on hold the high court’s decision and issued notice to CBI on Behura’s 2 January plea.

Behura has been granted bail on the condition that he furnish a personal bond of ₹ 10 lakh and surety of ₹ 5 lakh.

Raja was arrested along with other accused including former Tamil Nadu chief minister K. Karunanidhi’s daughter and member of Parliament K. Kanimozhi, who was granted bail in November.