The economic growth trajectory of India and China

Depending on which perspective you choose, the decades since 1978 have been either the best of times or the worst of times for India and China

A regular feature in almost every global journal and publication has been a comparison of India’s slow economic growth and, until recently, China’s rapid progress. Yet, in 1978, both countries had similar living standards.

As things stand, it is undoubtedly a tale of two cities. Depending on which perspective you choose, the past decades have been either the best of times or the worst of times for the Asian neighbours.

Proponents of India talk of the democratic and inclusive nature of the country’s growth while ignoring the slow pace of change. China’s backers point to unprecedented poverty eradication, urbanization and infrastructure improvements while ignoring the social and environmental costs these efforts have incurred.

At least in the popular press, one aspect of the story that receives less attention is the individual starting points of the two nations. China’s economic reforms started with Deng Xiaoping’s fang-shou (‘letting go’ and ‘tightening up’) efforts between 1978 and 1989.

The reforms then accelerated in a sustained manner—be it the Family Responsibility System that transformed agriculture, the opening up of the industrial sector for the growth of local enterprises, or the substantial effort to make state- owned enterprises more efficient.

India, as we know, started reforming more than a decade later, in 1991—and with the prerequisite of a much broader political alignment. China’s headstart led to a trebling of its per capita income in the first 25 years of its reform efforts, whereas India’s per capita income “only" doubled during those years. However, it is interesting to note that, after adjusting for this approximately 13-year lag, India has almost tracked China’s growth pattern in terms of absolute real gross domestic product (GDP) growth. India’s real GDP in 2014 was $1.55 trillion, which is close to China’s 2001 real GDP of $1.56 trillion (at 2005 prices, EIU).

Both countries have ridden the wave of a low dependency ratio (i.e., the ratio of the population younger than 18 years of age or older than 65 years of age to the total population). China’s dependency ratio fell from 68% in 1980 to 36% by 2010, but is now a concern: China will get old before it gets rich. The recent reversal of its one-child policy reflects its appreciation of this problem, but demographic change takes time. India’s dependency ratio has fallen by 8 percentage points each decade since 1990—faster than the 6 percentage points it dropped between 1978 and 1990. By 2030, India could increase its workforce by 200 million, overwhelming contributions from developing and developed nations and lending it a tremendous growth advantage. But having a younger population is not an unqualified blessing. A closer look suggests that India must gain ground on two counts. First, better work quality and working conditions. As per the Economic Survey 2014–15, 92% of the labour force is either self-employed or employed in the unorganized sector. This means inferior work quality, poor working conditions and lower-than-organized-sector wages—all of which significantly hampers productivity. Two, a large percentage of India’s labour force is unskilled or uneducated. Although the workforce is growing and getting younger, this lack of skill and education would not only mean a massive loss of opportunity but also lead to significant socioeconomic challenges.

Conventional wisdom indicates that government and social sector interventions would best tackle this issue. Undoubtedly, given the scale of the challenge and the need to address education and skilling tasks at basic levels, the government—as well as the social sector—must place this issue front and centre in their agendas. But that isn’t all: Research by Bain & Company and the erstwhile Planning Commission showed that the stance and role of private sector employers in manufacturing would be important in realizing the full potential of our human assets. This study shows that when companies and other stakeholders treat human resources as assets and focus collaboratively to provide more equitable compensation for labour, continuous skill development, good industrial relations and flexibility for employers, enhanced competitiveness results for both individual enterprises and the sector.

In the manufacturing sector alone, the Bain study shows four plausible scenarios, and the outcomes of growth in these four make for very different futures. These scenarios are predicated on the source of advantage that will motivate growth and on the model for skilling the labour force.

In the absence of concerted efforts to improve labour practices and skills, there could be significant industrial unrest or an inability to realize the potential of the economy in the years ahead—what we refer to as the “Mayday" and “Paradise Lost" scenarios. The “Modern Times" scenario posits fair treatment of labour and better industrial relations, but shows that the manufacturing sector likely remains characterized by low skills and low productivity, competing on the basis of low labour costs. 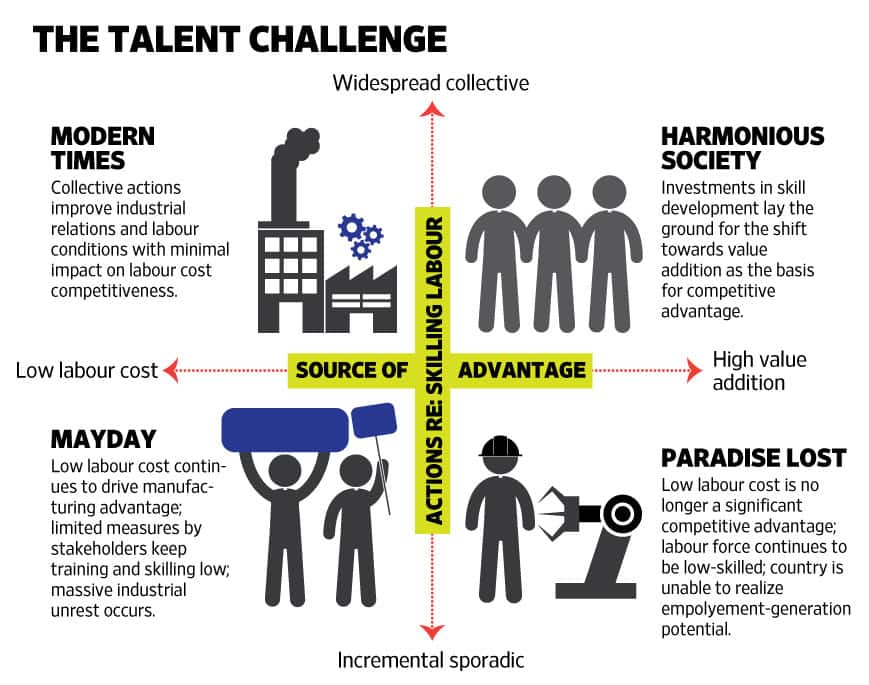 It is only in the “Harmonious Society" scenario, in which employers and other stakeholders take significant measures to improve all relevant outcomes for human assets—skill development, industrial relations and fair treatment of labour—that the economy could enhance its competitiveness and realize its full potential.

Next week: The Indian consumer’s freedom of choice.