Hyderabad: Deloitte Touche Tohmatsu India Pvt. Ltd, the local unit of one of the world’s Big Four accounting and auditing firms, says it performed a valuation of Congress rebel and Kadapa MP Y.S. Jagan Mohan Reddy’s publishing company “with the level of independence and quality expected of us", reacting to reports that the estimate had been inflated to the tune of ₹ 1,000 crore so he could sell shares in the firm at a premium.

“The work done by us for the company was part of a private contractual arrangement between two parties and was not based on any legal requirements and hence no reporting to regulators or other agencies was necessary," Deloitte said in an emailed statement. “Further, as this matter is under investigation, it will be inappropriate for us to comment on the same. However, given our terms of reference, our assignment has been performed with the level of independence and quality expected of us." Mail Today newspaper reported on 11 November that Deloitte senior director P. N. Sudarshan admitted before the Central Bureau of Investigation (CBI) that he had inflated the value of Jagathi Publications Pvt. Ltd by ₹ 1,000 crore to ₹ 3,500 crore for its five-year business plan period at the request of the company’s vice-chairman and Jagan Mohan Reddy’s personal auditor V. Vijay Sai Reddy in April 2008. Vijay Sai Reddy wanted the valuation backdated to 16 November, 2007, the report said. 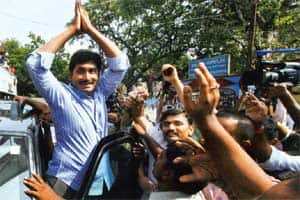 Deloitte stresssed in its statement that at no stage had it been the “auditors or accountants of the company in question".

“We were not required to verify or validate the books of account or other financial information or provide any report on the same," it said. “There was also no requirement to write books or compile accounting information."

The firm said it would continue to cooperate and assist “the designated agencies to the fullest extent required by the law".

“Even if it is for internal purpose, the valuation should be independent and the valuer should use his discretion," said Ashish Bhakta, a partner at Mumbai-based Advaya Legal. “The argument that the valuation was inflated at behest of the management is legally untenable, the board and shareholders will be misled by such valuations."

Jagan Mohan Reddy is the son of Y.S. Rajasekhara Reddy, popularly known as YSR, who led the Congress party to back-to-back electoral victories in Andhra Pradesh in 2004 and 2009. YSR died in a September 2009 helicopter crash; his son quit the Congress and resigned his membership of the Lok Sabha in November 2009 after being sidelined by the party leadership.

Jagan Mohan Reddy, who publishes the Telugu daily Sakshi as part of Jagathi and runs a television channel of the same name, won relection to Parliament in May as a candidate of the YSR Congress party he formed earlier in the year. Jagan Mohan Reddy has denied any wrongdoing.

The CBI, which in August registered a case against Jagan Mohan Reddy, has alleged that he benefited from investments made in Jagathi Publications by companies and individuals during his father’s term as Andhra Pradesh chief minister in a quid pro quo for favours such as mining leases and land allotments awarded to them by the state government. The CBI’s First Information Report alleged that 1,246 crore had flowed into Jagathi Publication through investments. Income tax (I-T) authorities, in their assessment of Jagathi Publications for the year 2008-09, picked holes in the valuation arrived at by Deloitte. The assessment order was dated 31 December 2010.

The IT order, a copy of which is in Mint’s possession, said Jagathi Publications had run up a cumulative loss of ₹ 319.84 crore as of 31 March 2010 and its share capital had been substantially eroded, indicating that “the valuation reports were unrealistic, over optimistic and not based on real appreciation of the facts".

CBI joint director V.V. Lakshmi Naryana, who is heading the investigation, refused to comment on the case. Lexicon PR, a public relations firm engaged by Jagan Mohan Reddy, said the matter was between Vijay Sai Reddy and Deloitte, and declined to comment further.

Vijay Sai Reddy, in a letter written to the investigating agency, denied pressurising Deloitte’s Sudarshan to inflate the valuation.

Copies of the letter were released to the media. “I submit that Deloitte submitted the valuation report on 16-11-2007, after satisfying themselves about the facts and figures. I never pressurized, never urged and never requested not only Mr. Sudarshan but anybody else in their organization to either backdate the report or increase the valuation," the letter said. “There was no need for me to do so nor was it possible, given the background and standing of Deloitte."