Thanks for Visiting Mint
You seem to have an Ad Blocker on. Please turn it off in order to continue, or whitelist Mint
HOW TO TURN OFF AD BLOCKER
OR
REFRESH IF YOU ALREADY TURNED OFF THE AD BLOCKER
Home >Politics >A land policy debate unfolds in Gujarat

Mahuva, Bhavnagar: Everything, everyone slowed as an inky dusk descended over the lakes and farms and a cacophony of bird calls filled the evening air. It was impossible not to feel the quiet and watch the white and black swans, egrets, pelicans and a zebra-striped bird with an orange plume fly over the lake and make their way home for the night. 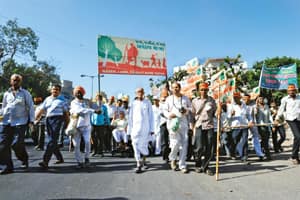 Voicing opposition: Protesters during a march from Mahuva to Gandhinagar on Wednesday.Photos by Vijay Soneji/Mint

But since government land records show it as a wasteland, the state government handed this over to detergent maker Nirma Ltd for a cement factory. Over the last two years, a great, grey building has risen from a lake to loom over it all—it is the skeleton of the factory that is being constructed at the centre of one of the four lakes.

Tiny, orange fairy lights of the building flickered in the gathering dark as trucks and lorries picked up speed, dumping soil into the lake, filling it up again to close down the source of water that has changed the life of 50,000 people in the area.

Across the factory, firewood kilns roar as women cook bajra rotlas (flatbread) and a watery, cauliflower curry for all the visitors who arrive at the satyagrahachavani (insistence-on-truth camp) every evening. From here, the farmers and their families have run a two-year-long, non-violent agitation to save their farms from the industrialization sweeping the state and are demanding a greater say in how development will come to them.

Last Saturday, the environment ministry issued a show-cause notice to Nirma, asking it to stop work because it had “withheld, excluded, omitted to be presented" important information from the ministry while seeking environmental clearance for the project.

An expert appraisal committee (EAC), led by environmentalist C.K. Varshney, said the plant area is wetland and if the ministry had known this, it would not have given environmental clearance. The ministry has also asked the company to explain why there should not be a “permanent suspension of work" and why a December 2008 environment clearance “should not be revoked".

The notice also indicts the government for incorrectly classifying a wetland and not “amending patently incorrect records which describe the site as a wasteland. The original fault left uncorrected, only further follies could spring thereof".

To be sure, the company looks at it differently, and has told the Central government that the notice is “illegal and unjust" and has refused to stop work on the factory till a Supreme Court hearing on 18 March.

A Gujarat high court division bench comprising chief justice S.J. Mukhopadhyay and justice A.S. Dave on Wednesday admitted a petition by Nirma against the implementation of the ministry notice.

While refusing to grant a stay, the court said Nirma is free to challenge the notice in the Supreme Court. The court also issued a notice to ministry in this regard. The next hearing is scheduled on 7 April.

The firm did not respond to repeated email and phone call requests for an interview.

The ministry notice comes soon after one issued to the Adani Group, which owns Mundra Port and Special Economic Zone Ltd in the same state, and following a key judgement by the Gujarat high court last year. The court directed the government of Gujarat to restructure its land acquisition policy. These have come as a shot in the arm of many similar movements in Gujarat that encourage farmers to stand up against industrialization that might separate them from their lands.

“All across the state there are people who are not happy with the way the government is signing MoUs (memoranda of understandings) with industries," said Chunnibhai Vaidya, a 92-year-old activist emerging as the leader and fulcrum for these Gandhian resistance movements in the state. “They do not want to part with their land at any price."

Kanubhai Kalsaria, a former Bharatiya Janata Party (BJP) member, but now an independent who says he enjoys Congress support, is encouraged by the turn of events. He led 5,000 people on a march to state capital Gandhinagar as part of protests. “But we are cautious and will not stop our agitation until this is over and the factory leaves our village," Kalsaria said. “We will continue our non-violent struggle against it."

Rudiben, a portly woman who was cooking at the camp, talked of why the villagers will not leave it till the plant goes. Her family of 25 lives off a 15-acre farm in Dohliya village, where they grow cotton, wheat, peanuts, lentils, vegetables and fruit.

“Until just six-seven years ago, we travelled hundreds of kilometres to Junagadh, Amreli and Surat with our children in search of work in cotton ginning, wheat sifting on farms, and on salt pans for eight months of the year in terrible living conditions," she said. “Now, because of the bandharas, our farms are growing twice the crops that they used to produce. This land will feed generations of my family. Tell me, why we would let that go for money that may be spent in a few years?"

The besieged factory has become a battlefield for two opposing ideas of development in Gujarat: one, where the government believes a factory fits into the image of a vibrant, industry-friendly Gujarat and will fuel infrastructure projects in the state.

The local people, on the other hand, say the bandharas that created the lake were enough to jump-start local agriculture and that the factory will destroy their farmlands and ultimately ruin them.

The bandharas were a long-cherished dream of Kalsaria, a former surgeon at a local hospital in Mahuva.

“The situation was quite bad. We were able to take just one crop from our farms…during monsoons," Pravin Shah, a farmer who owns a 10-acre ancestral farm on the outskirts of Mahuva. “Rest of the year, we relied on ground water reserves."

When the BJP offered to back Kalsaria during the 1999 assembly election, he jumped at the opportunity. A year after he won the seat, the first bandhara, Nikol, was built. In 2000, the Samadhiyala bandhara was completed, Kalsar was finished in 2002 and the last and largest of the four, the Malan bandhara on the Mahuva river, was built last year.

Just months after the Kalsar bandhara was constructed, the Gujarat government signed an MoU with Nirma to set up a Rs950 crore cement factory in Mahuva at its annual investor conference, Vibrant Gujarat, in January 2003. That’s how the factory came to stand in the middle of the lake formed by the Samadhiyala bandhara.

Because of the agitation, the state government set up two committees to study the issue. One was a sub-committee that included finance minister Vajubhai Vala, water supply minister Nitin Patel, industries minister Saurabh Patel and then home minister Amit Shah.

The second was a five-member expert committee. Neither committee observed the fact that the land was no longer wasteland. Basing its judgement on the recommendations of these two committees, the high court had ruled in favour of the company.

Now the government is seeking to distance itself from the project.

“It needs to be understood that our government has not acquired even one inch of land forcibly from our farmers. That is simply not our policy," said industries minister Saurabh Patel, while highlighting that the Gujarat land acquisition policy is one of the most benign in the country. Explaining the features of the state’s fledging policy (that was drafted three months ago at the directive of the high court), Patel said that his government does not directly “acquire land from the people for industry".

Patel said that industry had to arrange the purchase and do it with the consent of the farmers. Also, “the land has to be purchased at better-than-market-prices and the transaction has to be done under the supervision of an independent party. With so many checks and balances, it is almost impossible for anyone to be forced into selling their land…to a point where other state governments want to adopt our land policies in their states. So if the farmers of Mahuva do not want to sell their land to Nirma, no one, we (the state) are not going to get involved," he asserted.

The agitations currently on in Gujarat raise questions about the use of land, its acquisition and who determines how resources are employed.

The agitators of Mahuva say their lives hang in the balance. Kadviben, who will lose her farm if the plant comes, went with a group of women to meet Karsanbbhai Patel, chief managing director of Nirma. As he came in to the conference room, she pointed to a picture of a nesting bird and said: “What will happen to that bird if you destroy its nest? That is what will happen to us if you build this factory."

Soumitra Trivedi in Ahmedabad contributed to this story.