New Delhi: India is expected to have 730 million internet users by 2020, with 75% of new user growth expected to come from rural areas, according to a report released on Wednesday by The National Association of Software & Services Companies (Nasscom) in partnership with Akamai Technologies Inc., a leader in content delivery network services. The report, “The Future of internet in India", launched by Mr R. Chandrashekhar, president, Nasscom, and Dr Tom Leighton, co-founder and chief executive officer of Akamai Technologies, aims to understand the impact of the internet on the way people live, learn, work, shop and connect; and focuses on the future trends that will change the landscape of India by 2020.

Speaking at the launch, R. Chandrashekhar stated: “India’s internet consumption has already exceeded US to become No. 2 globally. Keeping into consideration the massive impact that the internet is creating across sectors, it has become the greatest disruptor of our age by changing the way we work, interact socially and live life in general. By 2020, the internet is expected to penetrate deeper in the hinterlands of the country, helping to create more opportunities for everyone." 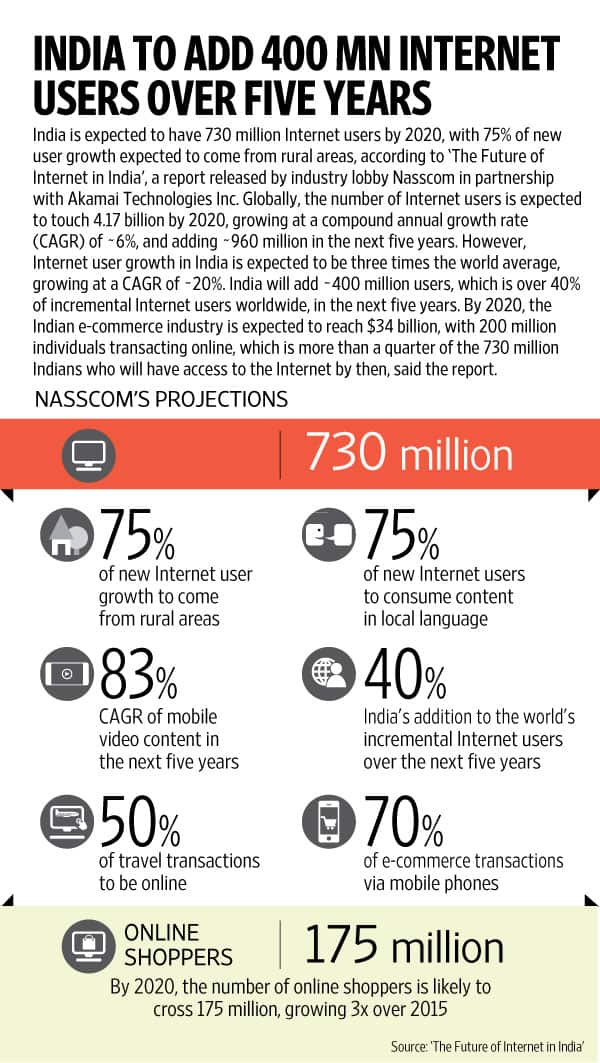 According to the report, India’s internet user base is the second largest after China. Globally, the number of internet users is expected to touch 4,170 million by 2020. The growth of the internet has successfully created a strong ecosystem for new businesses to tap into growing markets and create solutions to address their demands.

The report highlights how the rapid growth of the internet has impacted the key verticals that include e-commerce, travel and hospitality, financial technology and media. Here are the key findings of the report:

Online shopping will account for two-thirds of the total e-commerce market, edging out travel

According to the report, the overall e-commerce market in India was valued $17 billion in FY 2016, and by 2020, India will have an estimated 702 million smartphones in use and mobile phones will emerge as the preferred device for shopping, accounting for 70% of total online shopping. The fashion and lifestyle segment will emerge as the largest e-tailing category with a 35% contribution to e-eommerce gross merchandise value, or GMV, by 2020, overtaking the consumer electronics segment which dominates the sales of Indian e-commerce industry at present. Non-travel related transactions account for the remaining 39%, of which e-tailing accounts for 76%. Further, e-tailing has grown 93% year-on-year, with the top three e-tailing giants (Flipkart, Snapdeal and Amazon) accounting for over 80% of the segment in 2015. By 2020, e-commerce is likely to double to $34 billion, mainly driven by the growth in the online retail space, as per the Nasscom report.

Travel across India, for social visits, leisure, shopping and holidays is all set to increase and more people will be booking online, taking advantage of competitive pricing offered by online travel agents and aggregators. An increasing amount of user-generated content online (views on social media, reviews on websites, etc.) is driving aspirational travel, tipping the scales in favour of trips that were once only contemplated, never undertaken.

As per the India Brand Equity Foundation (IBEF), the total addressable travel market in India is estimated to reach $40 billion by 2020, and online travel is estimated to account for 40- 50% of all travel related transactions by 2020, up from 12% in 2015. The growth is being driven by demand from across India as a larger, younger population comes online.

According to IBEF, the tourism and hospitality sector is among the top 15 sectors in India to attract the highest foreign direct investment (FDI). During April 2000-September 2015, the hotel and tourism sector attracted around $8.48 billion in FDI, according to data from Department of Industrial Policy and Promotion (DIPP). It’s not just the online travel agents, even the public sector IRCTC and travel providers are benefiting from this trend.

OTT, the new kid on the block

The chief new medium of personal entertainment that has emerged is undoubtedly OTT, which stands for over-the-top, a term used to describe the delivery of entertainment—including TV programmes and movies—via the internet, without having to subscribe to a cable or satellite TV provider. People already have a screen in their pockets, prices of data plans are falling, and connectivity is getting better, which means OTT is set to become the medium of choice for entertainment for both existing and future users of smartphones. It promises to merge the worlds of television and digital media once content providers figure out what their audiences want to watch and distributors figure out how best to deliver it to them (subscriptions, transactions, or free, but ad-supported, platforms. With growing interest from traditional TV broadcasters, film producers are currently leveraging this opportunity to port existing TV content and movies to digital platforms and launch their own OTT platforms. According to a Media Partner Asia (MPA) report, India had 12 million active OTT video subscribers in 2014. And given the launch of several personal entertainment apps from large media houses since then, the number of subscribers has been steadily increasing. In parallel, social media is deeply intertwined with VOIP-based OTT players like Skype, WhatsApp, Viber, and SnapChat, which are changing the revenue game in telecom. As on January 2015, as per TRAI, SMS traffic in India fell to 4,367 million in June 2014 from 5,346 million in June 2013, a decline of 18.3%, and is likely to show further decline year-on-year. WhatsApp topped the messaging application market with 52% of all users using OTT messaging services in India. Messaging platforms are clearly evolving into destination-content portals and have a great deal of leverage in promoting and drawing viewers.

Fintech is disrupting financial services and is likely to have far more widespread impact on society and the Indian economy, both directly and indirectly. The fintech software market within this was pegged at $1.2 billion (13-15%). The remaining 87% focus on services, primarily in payments and core banking services. Overall, according to the report, India’s fintech market is expected to grow 1.7x between 2015 and 2020. While cash-on-delivery may remain the preferred mode of payment for newer users, keep in mind that use of mobile banking and e-wallets is surging.The government’s push for financial inclusion (e.g. Jan Dhan Yojana) will help fintech companies become data-rich, strengthening the unique national identity system (Aadhaar) and the ubiquity of mobile phones in India. Indeed, a large clutch of fintech companies are working on making sense of dark data and making it usable for the benefit of the larger population.

Last-mile connectivity to be enabled by government, telcos and technology providers

Multiple stakeholders will need to work in tandem to bring the next generation of internet users (rural, mobile-centric, and local-language consumers) online in India. While the Government’s Digital India initiative aims to deploy the National Optical Fibre Network (NOFN) providing broadband connectivity to cover 250,000 gram panchayats, the onus of bringing this internet to end users falls on telcos and technology companies. The NOFN will have to be linked with telecom towers to deliver wireless broadband services to rural households, but setting up telecom infrastructure in remote areas remains a challenge. So companies such as Google, Facebook, and Microsoft are coming up with unconventional methods. While Google wants to use a network of Helium balloons to relay signals to remote areas, Facebook plans to use drones as an alternative. Microsoft plans to use unused spectrum in frequencies used by TV channels to carry data.The pilot projects are expected to start in 2016-17. Telecom companies, state governments and the Union Government will need to partner with internet-based technology giants to drive up adoption.

Kshitiz Goliya contibuted to this story.