New Delhi: Which community is likely to have more working women? The one which has more women graduates or one with fewer of them? Most would say the former. An analysis of recently released census data on workers and educational levels will come as a surprise to those who think on these lines.

The census provides data on educational levels for men and women for different religious communities in India. It has also religion-wise statistics for non-workers. The data on non-workers has a separate sub-category—those who are not working but are seeking or available for work. Subtracting this figure from the number of all non-workers gives us an idea about how many people are willing non-workers in a religious community. We do not call it an absolute estimate because it will also contain those who have lost all hope of finding employment and stopped looking for work in despair. 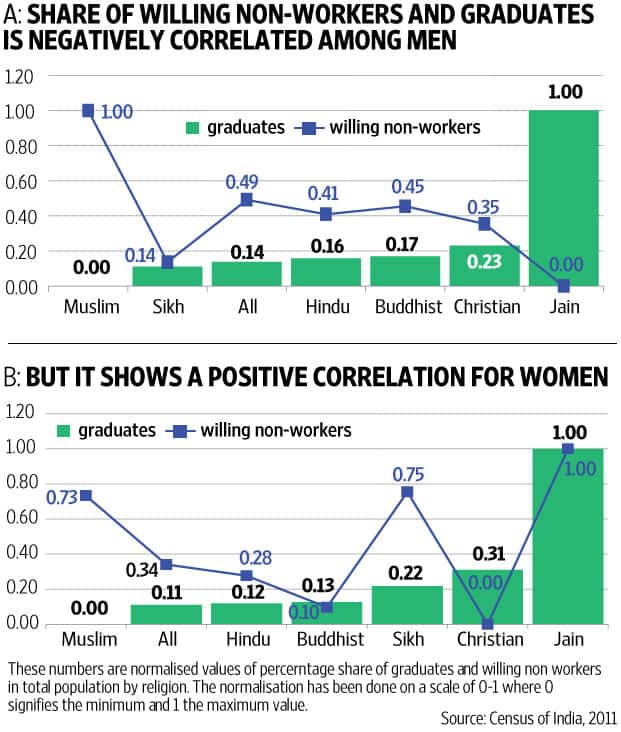 Is this relation a result of cultural differences across religious groups? An examination of age-wise data for education and willing non-workers shows that it is unlikely to be the case. Barring women in the 20-24 age-group, there seems to be a direct relationship between share of women who are at least graduates and willing non-workers across different age cohorts. The number of willing non-workers increases with an increase in educational attainment for women. The pattern reverses itself among men. These findings appear even more worrying when seen with the fact that India fares poorly when compared to similar economies in terms of female employment. What makes it worse is, India’s labour force participation rate for female population aged 15 years and above has actually gone down in the recent past. Labour force participation rate is defined as the number of people who are working or available/willing to work for every thousand persons. 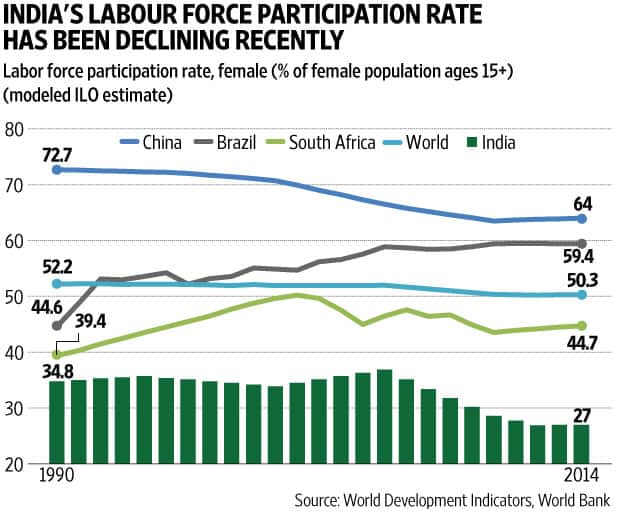 What is the explanation for this rather curious trend? Declining labour force participation of women in India has attracted a lot of attention. One stream of thought has given primacy to supply-side factors behind this trend. An increase in real household incomes (real wages doubled in India between 2004-05 and 2011-12) has reduced the need for women to take up work. Increasing urbanisation without adequate support for child care (rural areas have joint families unlike nuclear families in urban areas) has also made it more difficult for women to take up jobs. A 2015 paper by three World Bank economists has questioned this line of thought and argued that it is lack of suitable jobs for women rather than an adverse supply response which is responsible for the decline in women seeking jobs.

The paper says, “The literature on female labour force participation in advanced countries often makes the argument that women prefer ‘service sector’ or ‘white collar’ jobs. But in the context of a patriarchal society like India, where women bear the bulk of the child care and domestic work burden, the flexibility offered by working at home or on the farm, or farm casual jobs, may outweigh the benefits offered by a regular, full-time job. This hypothesis is supported by NSS data on the nature of work acceptable to women who are not in the labour force.

The NSS survey fields a specific set of questions to persons who are primarily engaged in performing domestic duties or free collection of goods and are not counted in the labour force. Almost 100% of these persons were women in 2011-12. Of these women, 72% of those who were willing to accept work if made available favoured ‘regular, part-time’ jobs over ‘regular, full-time’ jobs."

The analysis given above can help us understand why there is a significant positive correlation between better educated women and willing non-working women in India. It is to be expected that graduate women will not take up menial jobs unlike less educated or uneducated women.

Better education for women is generally taken as a proxy for progressive communities. The inverse relationship between educational and employment indicators among India’s religious groups shows patriarchy is a secular vice in our country.