A constitution bench affirms Aadhaar's constitutionality, saying it involved parting with minimal information to fulfill the larger public interest of the marginalised and poor who can use it to obtain benefits and subsidies

New Delhi: The Supreme Court on Wednesday upheld the constitutional validity of Aadhaar, albeit with riders.

In a majority 4-1 judgement, a constitution bench headed by Chief Justice Dipak Misra affirmed the constitutionality of the 12-digit unique identity scheme, saying it involved “parting with minimal information" to fulfil the “larger public interest" of the marginalized and the poor, who can use it to obtain government benefits and subsidies.

“In the present case as well, we have come to the conclusion that Aadhaar Act is a beneficial legislation, which is aimed at empowering millions of people in this country," the judges said in their 1,448-page verdict.

The ruling was lauded as landmark for erasing ambiguity over several aspects of Aadhaar and unleashing its potential for good governance and effective distribution of social welfare services.

The verdict places Aadhaar in consonance with most privacy and security standards envisioned by the centre, as well as the contours of its landmark August 2017 judgement holding privacy to be a fundamental right. In addition, the court added provisions such as making the use of metabase—a database for storing metadata—non-permissible by the issuing authority in order to bolster the privacy framework.

“I am very happy with the judgement. It is a landmark and remarkable judgement," attorney general K.K. Venugopal said. It was also welcomed by the government, with finance minister Arun Jaitley declaring: “It is a historic order, Aadhaar’s concept has been accepted after judicial review. We welcome this decision of Supreme Court. Everyone who has been criticizing Aadhaar should understand that they cannot defy technology."

The judges also affirmed its passage as a money bill that was under question. D.Y. Chandrachud, the sole dissenting judge, however, disagreed, saying, “Passing it as a money bill is a fraud on the Constitution and it violates its basic structure."

Clarifying issues surrounding the remit of Aadhaar, which has been used to access a plethora of services, the court upheld linking Aadhaar with permanent account number (PAN) but disallowed linking it with bank accounts and mobile numbers. Until now, banks and telephone companies had been pushing customers to link their Aadhaar numbers in order to avail of services. 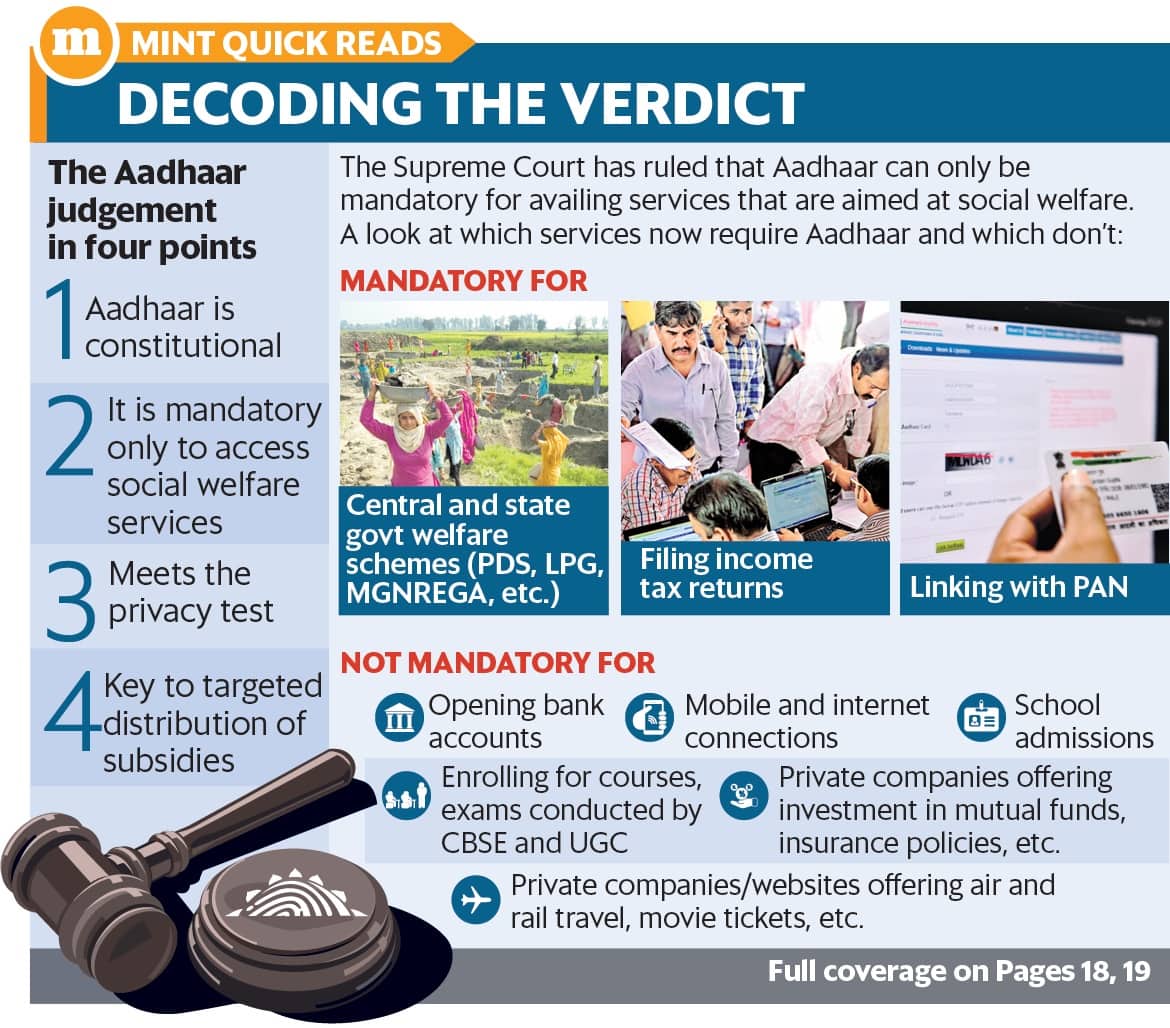 By striking down Section 57 of the Aadhaar Act, the court ensured that private companies can no longer use the Aadhaar database or insist on Aadhaar for their services.

Aadhaar’s role in education and admissions was also restricted—it can no longer be made compulsory for admissions by authorities such as the Central Board of Secondary Education and the University Grants Commission.

“While the actual ambit of the judgements delivered needs to be carefully considered, it appears that the court has struck a delicate balance between the social welfare imperative and the citizen’s fundamental right to privacy," said Ameet Datta, partner at law firm Saikrishna and Associates.

Wednesday’s ruling was one of several steps on the way to firming up rules and regulations over the scheme. On data protection, an expert panel headed by Justice B.N. Srikrishna is in the process of holding public consultations on its draft report and bill titled The Personal Data Protection Bill, 2018. The bill will need parliamentary approval to become an Act.

The judges rejected the petitioners’ argument that Aadhaar could lead to excluding certain citizens. “The entire aim of launching the programme was inclusion of those who deserve to get benefits. If we consider the 0.232% of failures, then 99.7% for whom it is meant, inclusion gets disturbed," said Justice A.K. Sikri.

Aadhaar, the 12-digit biometric identity number, has been issued to more than 1.22 billion people. It has become instrumental in availing a host of services, including central and state government schemes (such as the public distribution system, cooking gas and guaranteed employment for the poor), banking services, phone connections, filing of income-tax returns and making digital payments.

The apex court was ruling on a batch of over 30 petitions, heard over four months, each of which challenged several aspects of Aadhaar, including its constitutional basis, the process of collecting personal and biometric information under it and privacy and security concerns.

Another set of challenges was making it mandatory for accessing social welfare benefits, filing income tax returns as well as for obtaining and retaining PAN. The petitioners included non-government organizations, privacy campaigners, retired army officers and the government of West Bengal.

The centre’s main argument was that Aadhaar was introduced to help the poor, and keeping in mind “legitimate state interests" such as curbing terrorism, poverty, money laundering, black money and delivery of subsidies and benefits.

The petitioners criticized the Aadhaar architecture on the grounds that it could lead to a surveillance state by tracking people or profiling their personal data. This, if not curtailed, was destructive of a limited Constitution and violated an individual’s fundamental right to privacy, it was claimed.

Shyam Divan, lawyer for the petitioners, elaborated on the fears of India turning into a surveillance state, saying the provisions of the Aadhaar Act enabled the Unique Identification Authority of India (UIDAI) to collect data beyond an individual’s fingerprint and iris scan to issue the Aadhaar number. He also criticized the excessive power handed to the UIDAI to outsource the security of the database.

UIDAI sought to counter the argument, saying Aadhaar was backed by a robust system of security and that there had not been a single breach of biometric data from its end. The issuing body also claimed that Aadhaar had a 2048-bit encryption key, which worked like a number lock, making it extremely secure.