All clear for commercial drone flights from 1 December

New Delhi: Businesses across industries ranging from real estate developers to power producers in India will be able to use commercial drones for monitoring, and shipping and delivery operations from 1 December as the government unveiled a landmark policy on Monday.

The step could help substantially lower the cost of operations at various industries. These include aerial photography of real estate projects by companies, monitoring equipment at wind and solar power plants, precision delivery of fertilizers, disaster relief, mineral exploration and shipping mail.

In the initial phase, however, drones will be permitted to operate only along the visual line-of-sight and only during the day, with a maximum altitude of 400 feet, say the rules prepared by civil aviation regulator, the Directorate General of Civil Aviation (DGCA). E-commerce players and restaurants may, therefore, have to wait for drone adoption till it is allowed beyond sight, a move the government has promised to look into. 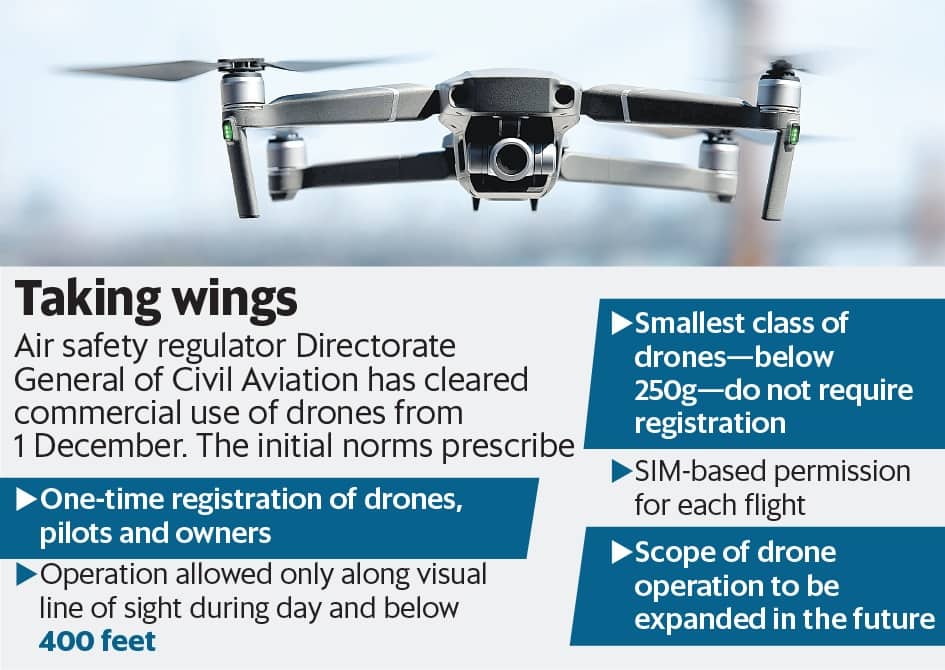 Exemptions have been offered to some categories of drones. These include those in the nano category, less than or equal to 250 grams and operating below 50 feet, as well as those in the micro category weighing between 250g and 2kg and operating below 200 feet. Drones operated by select government agencies also do not require a licence. Those with an operator’s licence need to have features such as a global positioning system, return-to-home facility, anti-collision capability, flight controller with flight data logging capacity, a SIM to ensure that drones do not take off without permission and an identification plate, the ministry said quoting the rules framed by DGCA.

Policymakers intend to expand the scope of regulation in the future to encourage large-scale adoption of drones.

A drone task force led by minister of state for civil aviation Jayant Sinha will advise on beyond visual line-of-sight operations, according to the statement.

Civil aviation minister Suresh Prabhu said: “I am sure many new and exciting applications will emerge that will propel India’s economy forward. Our progressive regulations will encourage a vast Made in India drone industry."