Retail inflation eases to 14-month low of 4.20% in October

Food inflation was 3.32% last month, lower than 3.96% recorded in September

New Delhi: India’s retail price inflation fell to a 14-month low of 4.2% in October from 4.39% a month ago as inflation in fruits and pulses softened, raising the chances of an interest rate cut by the central bank.

Data released by Central Statistics Office showed food inflation declined to 3.32% in October from 3.96% in September.

New Development Bank president K.V. Kamath said a good monsoon, inflation coming down and the demonetization drive by the government will raise the prospects of a one percentage point cut in interest rates.

“With demonetization, we may see further reduction in inflation which may lead to a one percentage point rate cut within the next three to six months’ time. Demonetization has sucked out a lot of liquidity which probably was not productive. This should have a positive impact on inflation," he said. 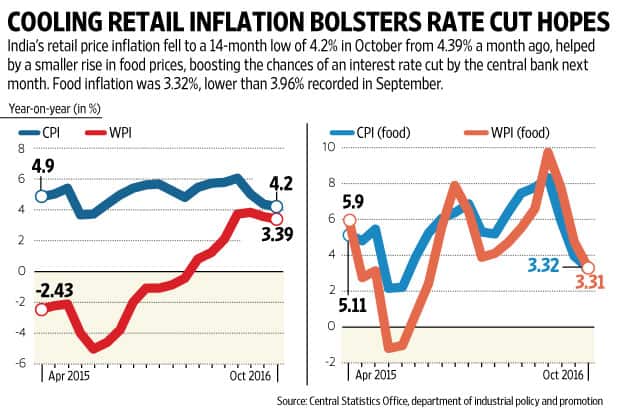 Inflation in rural India continued to be higher at 4.78% than in urban India at 3.54% in October.

Data separately released by the industry department showed wholesale price inflation softened to a four-month low of 3.39% in October against 3.57% a month ago due to lower inflation in primary articles including both food and non-food items. However, vegetable prices increased by 3.1% in October after two consecutive months of declines. Non-food manufacturing inflation rose for the fourth consecutive month, reaching a 22-month high at 1% in October, driven by basic metals and alloys which exited from deflation zone.

“The improvement in non-food manufacturing inflation indicates rising pricing power of producers, which is expected to support nominal sales growth of companies. Support to producers from lower input costs has reduced with a rise in commodity inflation," Shubhada Rao, chief economist at Yes Bank.