Aided by remonetisation, India's economic growth is expected to pick up in the fourth quarter of FY17 fiscal year from 7.1% in the previous quarter

New Delhi: Aided by remonetisation, India’s economic growth is expected to pick up in the fourth quarter (January-March) of 2016-17 fiscal year from 7.1% in the previous quarter. On Wednesday, the government will release fourth quarter GDP numbers along with data for the full fiscal year.

“We expect 7.2% GDP growth in Q4 FY17 and also upward revision in all the preceding three quarters. The Q1, Q2 and Q3 GDP numbers are expected to be revised by 40 bps, 60 bps and 40 bps respectively to 7.6%, 8% and 7.4%," Soumya Kanti Ghosh, group chief economic adviser at the State Bank of India wrote in a report published on Monday.

According to economists, though the latest data will provide clues about whether the domestic demand has recovered from the demonetisation shock in the December quarter, overall GDP growth is likely to be lower than the 8.4% registered in the January-March quarter of 2016-17. 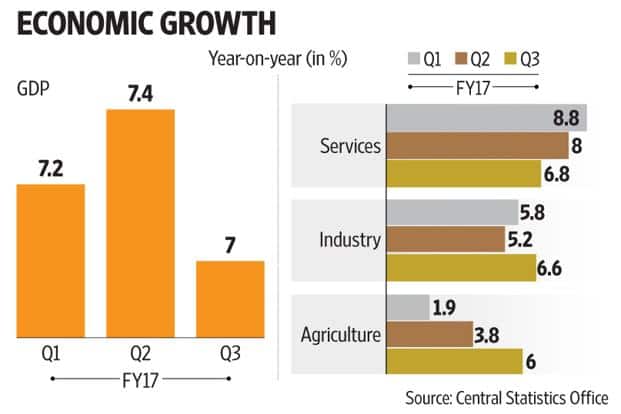 According to the SBI report, remonetisation has reached 80% of the total extinguished currency in circulation as on 19 May.

Credit rating agency Icra Ltd in a report released on 25 May said the services sector is likely to record a robust 8.8% growth in the March quarter, “boosted by double digit rise in a variety of sub-sectors such as air cargo traffic, bank deposits, corporate bonds, commercial papers as well as the central government’s non-interest non-subsidy revenue expenditure."

However, the industry category is expected to record moderate growth led by the expansion in manufacturing, reflecting the trend in corporate earnings.

Madan Sabnavis, chief economist at ratings company CARE Ltd said domestic demand will recover in the fourth quarter mainly on account of the industry and services, while maintaining that full recovery will be seen probably in first or second quarter of 2017-18 as the recovery is always gradual.

Economists also suggested that the new GDP numbers will be a pleasant surprise as they will factor in the effects of the new index of industrial production (IIP) and the Wholesale Price Index (WPI) series which the government released on 12 May.

The new WPI and IIP series, both with a base of 2011-12 were released in 12 May 2017 to replace the prevailing 2004-05 series. The base year for these new series is now congruent with the same as that of the GDP data, which is expected to improve the accuracy of the latter.

IIP is an input in estimating gross value added for the unorganized manufacturing sector, while WPI is used as a deflator for deriving real GDP values from nominal data.

The new WPI series indicates a sustained trend of lower annual inflation relative to earlier series, which is likely to lead to upward revision in the level of real GDP.

Similarly, the new IIP series indicates that volume growth in the industrial sector in the last five years has not been as weak as previously estimated. This may also result in some upward revision in growth for recent years, for those informal sub-sectors, whose growth is being estimated using the trend in the IIP.